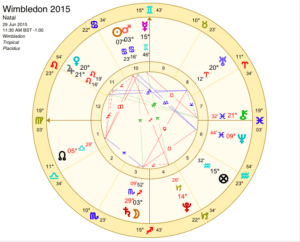 Update Sunday 12th July 2015: Novak Djokovic is the Wimbledon champion as my head predicted (my heart wanted Andy Murray to win) – see below. The chart of the tournament pointed to a Gemini winner and that the favourite would do well. In the end, it was both no. 1 seeds, Novak and Serena who romped away with the titles. Roger Federer proved that Jupiter in Leo continues to make this an epic year for many Leos and boy, has he been playing well. He was runner up for second year in a row. Bring on the US Open!…

I sneaked the chart for the start of Wimbledon on to the website two days ago and thank you to all who have left comments so far.

I’m already excited about what the fortnight ahead holds and if the chart of the tournament is anything to go by, there’s going to be some exciting tennis.

Here are the predictions:

The chart for the the start of the tournament is dominated by a strong Mercury, the planet that’s linked to tennis. Mercury types are dexterous, quick and Mercury rules the hands.

A Virgo Ascendant makes Mercury the ruling planet. Mercury is strong in Gemini, its sign of dignity and stands proud at the top of the chart close to the Midheaven, the success point of the chart. Straightaway this looks like we’re in for some exciting tennis especially as Mercury is connected to the breakthrough duo of Jupiter and Uranus through sextile, i.e. harmonious aspects. Jupiter expands what it touches and Uranus favours all that’s new. Expect whoops of delight, brilliant tennis and one or two surprises.

Astrology doesn’t have to be complex and sometimes symbolism leaps out at you. Take for example the chart for the French Open 2015 which had Uranus in Aries conjunct an Aries Midheaven. The winner, Stan Wawrinka, is a Sun Aries and he was having a Uranus transit during the tournament – simple astrology.

So does this mean that according to this year’s Wimbledon chart Sun Geminis are going to do well or those players with Mercury strong in their chart will dominate? There are some likely contenders immediately as you’ll see below.

The Moon is in Sagittarius as the tournament begins and its next aspects are challenging ones, a square to Neptune followed by an opposition to Mercury. The ruler of the Ascendant on the Midheaven is a good case for the favourite to win the tournament but the Moon’s aspects question that statement. Will the astrology prove elusive? Possibly. Let’s see what the player’s charts show for the next two weeks:

He is the no. 1 seed and the reigning champion. He is a Sun Gemini plus his natal Mercury is at 18 Gemini and close to the Midheaven of the chart at the start of the tournament. That’s a strong testimony straightaway to the favourite winning the tournament.

He’s going to be super keen to win another title having been defeated by Wawrinka at the French Open three weeks ago. Other astrologers have spoken about Saturn opposing Novak’s Gemini Sun and slowing him down but the reality is that Saturn was opposite his Sun in January 2015 and only returns to oppose his Sun in October 2015. Saturn is currently reversing through Scorpio so out of the way.

I did notice that Djokovic’s coach, Boris Becker, has his Sun at 29 Scorpio and that’s where Saturn is right now. What form of endings/reality check does it hint at for him? Becker’s Sun is conjunct Neptune in the 12th house so something behind the scenes perhaps, rather than connected to Novak.

The no. 2 seed has played a brilliant year’s tennis whilst Jupiter has been in his sign of Leo. Jupiter remains in Leo until August 11th 2015 but is now separating from his key planets, the Sun and Mercury, his career planet.

Federer has a Gemini Midheaven, the success point of his chart, which shows not only his tennis greatness but the fact that he’s father to two sets of twins. Gemini’s zodiac symbol is the twins, duality/multiplicity is a Gemini theme and his children are a key part of his vocation. Yet Federer’s Midheaven is 6 Gemini which gives too wide an orb for it to be significant to the Mercury/Midheaven combination in the Wimbledon chart.

I’m a huge Federer fan but the astrology isn’t leaping out for me. His natal Venus is at 17 Virgo close to the Wimbledon chart’s Ascendant so no doubt he’ll be one of the most-loved players yet again and will continue to delight us with his tennis and his charm.

Plus Jupiter at 21 Leo is picking out two of the outer planets in his natal chart, Pluto at 21 Libra and Neptune at 22 Sagittarius. Not amazing astrology, but hopeful. Personally I hope he does well and he often plays his best tennis at Wimbledon.

When I first saw the Wimbledon chart for 2015, my initial response was ‘that’s Andy Murray’s chart’ as Andy Murray has Mercury in Gemini conjunct the Midheaven.

Andy Murray is born only one week before Novak Djokovic in the same year but Murray is a Sun Taurus and Djokovic is a Sun Gemini. Yet Andy Murray’s Ascendant is 14 Virgo which makes his ruling planet Mercury at 3 Gemini conjunct his 7 Gemini Midheaven.

In other words, he has the tennis planet conjunct the career point of his own natal chart, a strong testimony to becoming a brilliant tennis player. His personal (Ascendant) and professional (Midheaven) lives all rolled up in one, both Mercury ruled.

Murray’s chart is strong in fire signs, the same as Djokovic but there are closer aspects to Murray’s chart right now. In fact, Jupiter, the success planet, at 21 Leo 17 is almost exactly trine to Murray’s natal Moon in Sagittarius at 21 Sagittarius 43. Another powerful indicator that the no. 3 seed is going to delight the home crowd although he might have to defeat Nadal, Federer and Djokovic if he’s going to win the title.

If the French Open achieved anything, it made astrologers question Nadal’s birth time and elicited huge debate in the comments section on this website. Astrodienst has his time of birth as 6:20pm allegedly from his birth certificate which would make his Midheaven 17 Leo 35. On the day of the final of the French Open, Jupiter was at 17 Leo 35 which was stunning astrology for him to win one more time at his favourite tournament.

Yet it didn’t happen, his tennis playing has been erratic and he’s currently the no. 10 seed. Nadal himself told journalists in the past that he was born at 7pm, a new time emerged of 7:15pm, and after much debate, I am going with the birth time of 7:10pm which makes his Midheaven 0 Virgo 29, therefore his career planet is Mercury at 26 Gemini. This again backs up the power of Mercury in Gemini for tennis players.

Nadal’s Sun is at 12 Gemini close to the Wimbledon chart’s Midheaven but being one year older than Murray and Djokovic, his Saturn Return is looming, exact November 2015. Nadal has had a tough time in the past with his 1st house Saturn which at 5 Sagittarius opposes his Sun in Gemini. The 1st house rules the physical body and Nadal has had more than his fair share of injuries interrupting his tennis career.

Jupiter is moving closer towards making a harmonious sextile aspect with Nadal’s Mercury, exact July 25th 2015, but it seems a little wide to really boost his chances this coming fortnight. I hope Nadal will play well even though the grass courts of Wimbledon aren’t always his favourite surface.

You can’t discount Stan the Man, the no. 5 seed, after winning Grand Slam title at the Australian Open in 2014 and the French Open in 2015. He’s becoming a contender and vying for dominance alongside the Big Four of Djokovic, Federer, Murray & Nadal.

The astrology again links in to his chart as the Sun at 7 Cancer is conjunct his natal Ascendant at 9 Cancer as the tournament begins, plus his ruling planet, the Moon at 23 Gemini is boosted by a harmonious sextile aspect from Jupiter at 21 Leo, exact on July 9th 2015. You would expect him to do well with Jupiter’s showing.

Berdych is the no. 6 seed. A Sun Virgo with three planets in one of the signs ruled by Mercury, you have to fancy his chances once Jupiter enters Virgo in August 2015 where it remains until September 2015.

This time around Jupiter, the success planet, is moving ever closer to his natal Venus at 24 Leo 20, exact on July 15th 2015. n.b. Jupiter takes 1 year to move through each sign of the zodiac and 12 years to return to each planet in your natal chart.

Born 3 years after Thomas Berdych, the no. 9 seed also has Venus in Leo at 23 Leo 02. The exact conjunction from Jupiter takes place on July 9th 2015 so during the tournament. It’s hard to know whether this will boost his career or another area of his life as without a time of birth you can’t tell which area of his chart it influences.

I’ve been looking at the charts for some of the newer names to see if any astrology leapt out. I love Kokkinakis’ chart as his Sun is at 20 Aries 30 and Uranus is almost exactly conjunct his Sun as the tournament begins at 20 Aries 12. Uranus springs surprises so keep an eye out what happens with Kokkinakis.

In true Gemini style, I’m choosing two winners this time around. As the Wimbledon chart seems to pick out the favourite, my head is going with Novak Djokovic whose own Mercury links in to the Wimbledon chart. Yet my first instinct was for Andy Murray and with such lovely symbolic astrology, my heart goes with Andy to win.

Looking forward to all your comments but play nicely folks. We all have our favourites.

n.b. If any of you find out a player’s time of birth, please do pass the information on to me. It would be much appreciated.