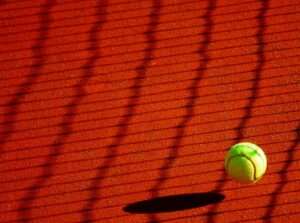 The astrology showed that the favourite wouldn’t win and Djokovic missed out yet again on his elusive French Open Grand Slam but this time it wasn’t the French Open reigning champion, Rafael Nadal, who defeated him but Stan the man Wawrinka. There was much debate in the comments about a different birth time for Nadal of 19:15 mentioned in his autobiography which scuppered my prediction for him to win. I will be keeping a close eye on what happens for Nadal with regard to the new birth time. Next… Wimbledon 2015. Bring it on!

Back by popular demand, I am once again taking a look at the astrology for the men’s tennis, this time the French Open which begins tomorrow, Sunday 24th May 2015.

If you’re new to my tennis predictions, I use astrology to see what it can tell us about the Top 10 seeds and I keep my astrology relatively simple by checking out the transits during the tournament and especially Jupiter, the success planet.

It’s perhaps worth mentioning that I only have the time of birth for the top players. (If you have any additional information for me regarding times of birth, I’d love to receive it. Thank you.)

Plus I take a look at two charts which represent a ‘moment in time’, the chart drawn up for the start of the tournament and the chart for the final. The chart that symbolises the start of an event can signal what’s going to happen in the tournament, whether the favourite will do well, shock exits, etc.

If you want to check out some of my other tennis predictions which I began in 2012, then either search ‘tennis’ in the search box above or scope out the Sports Astrology category (see side bar on right).

I am starting with Rafael Nadal as he has won this tournament more than any other player, 9 times, and he is the reigning champion. OK, I know Nadal doesn’t seem to be on form this year as he’s been losing on clay a lot over the last few months but if he’s going to have yet another comeback and prove he’s a winner not a quitter, it’s now.

The astrology is outstanding – Nadal’s Midheaven, the career point of his chart, is 17 Leo 35 and on June 7th 2015 and exactly at the start of the French Open final, Jupiter is at … 17 Leo 35. To put this in perspective, it takes 12 years for Jupiter to circuit the zodiac so this is potentially a crowning moment for Nadal.

That gives a huge nod to Rafael and yes, he has to get through the rounds leading up to the final but as an astrologer I have to say this is fantastic symbolism for victory. My only question mark with his astrology is the fact that Mercury retrograde (which can symbolise mishaps) is conjunct Rafael’s Sun at 12 Gemini as the tournament begins. What does this mean? It’s tricky to interpret, perhaps something we’re not seeing right now that gets in the way?

Roger Federer has had a great year whilst Jupiter has been in his sign of Leo. He’s been winning tournaments and been through to the final of tournaments consistently. On the day that the tournament begins, Jupiter is at 15 Leo 37 and Roger’s Sun is at 15 Leo 38. Again this is fabulous astrology and suggests that he will be on form physically and mentally.

However, once Jupiter connects with his Sun (the same day, May 24th 2015), it then begins to separate and moves away from Roger’s Leo planets. As an astrologer, I have to say I think that 2015 will be Roger’s last big year on the tennis court. He turns 34 in August 2015 and you have to ask whether a 35 year old can continue to compete against the young guns.

Retrograde Mercury also connects with Roger’s chart because on the day of the final, Mercury retrograde is at 5 Gemini and close to Roger’s Midheaven at 6 Gemini. If Roger gets to the final, that’s a trickster combination that doesn’t favour a win.

When Novak Djokovic is on fire, he’s invincible. He has been playing some awesome tennis recently and deserves to be no. 1 in the world. He is the favourite to win the French Open and his astrology is very hard to read but he’s definitely in there somehow. His natal Jupiter is at 18 Aries 57 and at the start of the tournament, Uranus, the planet of unpredictability is at 18 Aries 59. Plus Uranus is conjunct the Midheaven of the tournament chart!

What on earth does this mean? A shock, a surprise? I’m wondering whether it’s a shock exit for Djokovic but I might be wrong. It might be the fact that finally he wins the one Grand Slam that’s been eluding him, the French Open. It’s not easy to interpret as it can go either way.

Plus, Mars, the competitive planet, is at 18 Gemini on the day of the final conjunct Novak’s natal Mercury at 18 Gemini and as I’ve said before, Mercury rules hands and Mercury in Gemini symbolizes a fantastic tennis player. Oo-er, tricky to interpret.

Andy Murray was born one week before Novak Djokovic and shares the same Midheaven as Roger Federer (Andy – 7 Gemini; Roger – 6 Gemini). So Uranus is also separating his Jupiter in Aries (n.b. he married when Uranus was applying to Jupiter, his partner planet). Plus, Mercury is retrograde over his Midheaven during the tournament.

Plus points: Mars, the competitive planet, is conjunct his Midheaven at the start of the tournament so he’s keen and his Mars at 26 Gemini is conjunct the Midheaven of the final chart so he too is in the mix.

Best of the rest:

Uranus, planet of surprises, has just moved over his natal Mercury/Venus conjunct at 17/18 Aries. Other than that, nothing leaps out although his Moon is at 23 Gemini, close to the Midheaven of the final chart.

Nothing leaps out astrologically except the Moon is conjunct his north node at 18 Aquarius 37 on the day of the final.

Not a lot connects Gasquet to the charts of the tournament apart from the fact that his Sun is at 26 Gemini, the degree of the Midheaven on the final chart.

This is quite an amazing chart. A Leo Ascendant of 8 Leo, the Sun is at 2 Gemini, the ruling planet. In the 1st house, the Moon at 18 Leo is separating from a powerful Jupiter at 15 Leo and moving towards a trine with Uranus at 18 Aries conjunct the Midheaven 20 Aries.

Jupiter often indicates the favourite in a tournament but the Moon is moving away from Jupiter and instead hits on Uranus, the outsider, the unpredictable element. So this is picking out those players who have strong Gemini/Leo in their chart. It also signals that the favourite will not win. 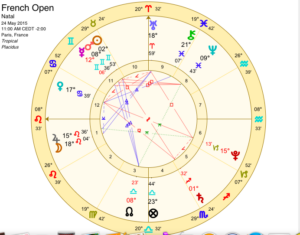 This is really intriguing astrology and I can’t wait to see how it will play out. However, you want a prediction and as an astrologer I’m going to plump for the no. 6 seed, the tennis player who loves this tournament, Rafael Nadal. I cannot ignore Jupiter conjunct his Midheaven exact on the day of the final.

Let me know your thoughts and I know you will. I love the rapport of these tennis predictions. Can’t wait to hear from you.