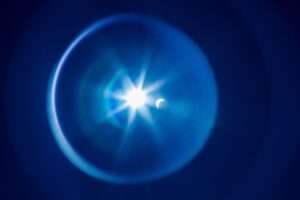 This week’s Full Moon which takes place on Thursday 18th August is also a Lunar Eclipse, or is it?

There’s been some debate about this already and whilst it’s named an eclipse in some ephemerides (book of planetary data), it’s missing from others.

To determine further whether this is an eclipse, it’s important to know what the criteria are which turn a New or Full Moon into a powerful eclipse event.

What Defines An Eclipse?

The most powerful eclipses are total, i.e. when the planetary body is completely obscured and, for example, day turns to night. This week’s Full Moon would be a penumbral eclipse if it confirmed eclipse criteria but although it’s close, the earth’s shadow will not be cast on the Moon.

Another factor to determine whether a New or Full Moon is an eclipse concerns the placement of the karmic nodes. These are destiny points in astrology and in your natal chart they reveal your lessons in this lifetime. Traditionally the Moon needs to be within 18 degrees of the nodes for an eclipse to occur and within 11 degrees for a central eclipse.

This week, the Moon is at 25 Aquarius 51, the Sun opposes the Moon at 25 Leo 51 whilst the north node is in a different sign altogether at 12 Virgo 43. However as each sign of the zodiac contains 30 degrees within it, this puts the Moon 17 degrees away from the north node during this week’s Full Moon. It’s wide but it’s within eclipse criteria, hence the debate whether it’s an eclipse or not an eclipse.

In my mind, this equates to an eclipse event although you’ll hear other astrologers who disagree and state that an eclipse can only fall within 12 degrees of the nodes.

Either way, this week’s Full Moon/Lunar Eclipse is a powerful marker in the heavens and will be especially important if you have key planets or angles within 1 degree either side of the eclipse degree, i.e. 24-26 Leo or 24-26 Aquarius.

Eclipses are thought of as game-changers and linked to endings and new beginnings, they coincide with the highs & lows of life. One door closes and a new door opens, someone or something is eclipsed to make space for something new.

Sometimes the timing can be exact and events prove dramatic but other times there’s barely a flutter. Yet this can still trigger a slow course of change as a series of small events move you in a new direction over the next few weeks or months.

Eclipses occur in eclipse cycles which last for a couple of years. They begin at later degrees of the two signs involved and move towards early degrees of each sign. Whether you count this week’s Full Moon as an eclipse or not, this is the start of a powerful couple of years for those born under the signs of Leo and Aquarius as there will be eclipses in these two signs until January 2019.

What It Means For You?

Here are the areas of your life which are being triggered by this new eclipse cycle. Events during this week’s Full Moon eclipse might pinpoint where change is required or imminent as a new phase begins. On February 11th 2017, there’ll be a repeat Full Moon eclipse at 22 degrees Leo/Aquarius when the eclipse cycle gets underway proper.