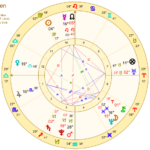 Update: Djokovic won! A correct prediction. See astrology below. The major controversy, however, came in the women’s final between Serena Williams and Naomi Osaka – the battle of the Sun Libra women. This is the signature of Uranus conjunct the Descendant of the tournament chart – Uranus symbolising controversy. Plus, note Venus’, the planet which… Read more