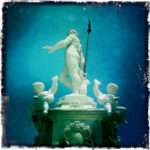 Neptune is the planet of illusion and was discovered in 1846, a period in which there were major developments in photography and film. It’s no surprise that Neptune dominates in the charts of film stars, actors, actresses and anyone who’s seduced or charmed by the idealistic worlds of glamour and fame. Neptune is the antithesis… Read more