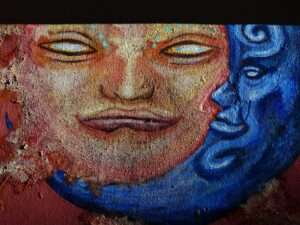 Eclipse season is here with two eclipses in March.

As preparation for this month’s eclipses, here’s the transcript of an article I wrote for Soul & Spirit magazine in February 2013.

When the Sun and Moon made love and Created the Stars.

Imagine what it must have felt like thousands of years ago when an eclipse took place and the shadow of the Moon blocked out the light of the Sun. Flowers would close and birds go to roost as day turned to night. It must have been a terrifying phenomenon and small wonder that ancient people thought the world was coming to an end.

Today we’re eclipse-savvy as eclipse-chasers tour the world to capture the best photographs of this awesome sight and poets, songwriters and lovers are inspired by the heavenly communion of the Sun and the Moon.

Eclipses take place twice a year in pairs and they are powerful pointers of destiny when they fall within two degrees of a planet or angle in a birth chart.

Many myths developed around the eclipse phenomenon and in ancient times this involved a lot of noise and the beating of drums to scare away the angry Gods. Various cultures created myths of animals they imagined were attacking and swallowing the Moon; the dragon in China and Thailand, dogs and coyotes for North American Indians and the snake in Africa and Indonesia.

The most romantic myth of all stems from Tahiti where they believed the light of heaven was obscured as the Sun and Moon came together to make love and create the stars.

The Meaning of an Eclipse

In ancient times eclipses were viewed as a bad omen and a message from the Gods, whereas in modern times people are divided on the meaning of an eclipse. For some, they represent power-points of energy when our spiritual awareness is heightened. A solar eclipse is an opportunity to sweep out the old and create super-charged, powerful new beginnings whilst the lunar eclipse is viewed as a significant relationship marker or an important event or achievement

For others, the language and symbolism of an eclipse acts as a guide. When the light of the Sun is ‘eclipsed’, we are in the dark and events are hidden and shadowy. Secrets emerge and what’s unknown comes to light. As an eclipse involves three bodies, the Sun, the Moon and the Earth, it represents any ‘triangle’ situation where one person loses out allowing another person to take advantage. At an eclipse, one door has to shut before a new door can be opened.

Eclipses play a prominent role in the lives of royalty as the Sun represents the King in astrology and the Moon the Queen. The eclipses in the heavens pinpoint events in the lives of key individuals intertwining their own individual journey with the path of destiny, hence the saying, ‘As Above, So Below’.

Diana’s fate and her role in life seemed inextricably linked to the heavens and especially the Moon. She was a Cancerian, the sign ruled by the Moon and her name Diana referred to a Moon Goddess. She brought Cancerian values to the authority of the Royal family and is remembered for being warm and caring, a fun-loving mother and the ‘Peoples’ Princess. She would have become Queen if she’d remained married to Charles, stepping up to the symbolic role of the heavenly Moon.

Eclipses often signify key events in celebrities’ lives; they get engaged, marry, split up and divorce on eclipses and either rocket to fame or fall into disgrace. Via the media and the covers of glossy magazines, modern-day celebrities have become the ‘new royalty’.

In astrology admittedly, Brad and Jennifer had amazing compatibility as they have what’s called a cosmic marriage, his Sun at 25 Sagittarius sits next to her Moon at 23 Sagittarius. It’s a compelling attraction when the two heavenly bodies complement each other, the opposite of an eclipse when the light of one blots out the light of the other.

Trouble loomed, however, in 2004 when Brad was filming Mr & Mrs Smith with his co-star Angelina Jolie from January through to October. The two fell in love on set and on October 14 2004, there was a solar eclipse at 21 Libra, the sign of relationships.

This eclipse had a close connection to Jennifer’s chart and for her it must have signalled the beginning of the end, and on January 7 2005, Brad and Jenn announced their separation. Their divorce came through on October 2 2005, the day before a solar eclipse at 10 Libra, again in the sign of relationships. This was the end for Brad and Jennifer and confirmed the new relationship that was to become known as “Brangelina”. In real life, eclipses often implicate three people, one of whom loses and one of whom wins.

Miranda Hart A good example of the power of eclipses is the comedienne, Miranda Hart who was catapulted to fame when her sitcom Miranda became a surprise hit. 2011 was her turn-around year and in January 2011 at the British Comedy Awards, she won 3 top awards, including the “Peoples Choice Award for the King or Queen of Comedy.”

This coincided with a solar eclipse in Capricorn on January 4 2011, almost exact her natal Jupiter, the planet linked with royalty and success, a fitting symbol for her being crowned “Queen of Comedy”. On June 15 2011, the lunar eclipse fell close to her Sun in Sagittarius and the first two series of Miranda were repeated in summer 2011, confirming her elevated status.