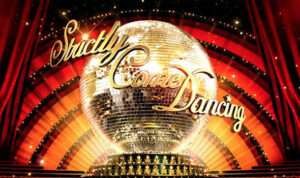 As some of you already know, I’m a huge Strictly Come Dancing fan and I’ve written various blogs over the years using astrology to predict who will win.

Why earth signs, you ask? Strictly looks as if it’s going to be all glitz and glamour, surely suiting the extrovert fire signs. However, as every contestant will tell you, it’s a slog, physically relentless and the celebrities put in hours and hours of hard work. That’s what earth signs do best. They understand there’s no gain without pain and knuckle down for the long haul.

Since the article in 2014, Caroline Flack (Scorpio), Jay McGuinness (Leo), Ore Oduba (Scorpio) and Joe McFadden (Libra) have lifted the glitter ball. No earth signs among them, but earth remains the dominant element on the winners roster: Earth – 6; Water – 4; Air – 3; Fire – 2.

Which is why this year’s final is particularly gripping. For starters, there are two earth sign partnerships still in the running:

We know Ashley’s not popular with the public but Joe has a huge You Tube following, he’s the only male contestant in the final and men have won more times than women – 9 wins to 6. His chances are high.

The other two finalists are both water signs; Faye Tozer (Scorpio) is partnered with Giovanni Pernice (Virgo), meaning three of the professional dancers in the final are earth signs, either Virgo or Capricorn.

Stacey Dooley (Pisces) is partnered with Kevin Clifton (Libra). Going by star sign alone, Stacey and Kevin don’t fall into the earth sign category. They are the favourites, however, and Kevin has been the Strictly bridesmaid for more years than he’d like to mention. He’s been in the final four times but never won.

Surely, this must be Kevin’s year and, if you’re a Stacey & Kevin fan like me, you’ll want to dig a little deeper into the astrology. The astrology chart for the final is below. I’ve also added the dates of birth of the four finalists and their professional partners.

What the astrology does show: Stacey has transiting Mars at 19 Pisces conjunct her Sun at 18 Pisces, which gives her a competitive edge. Kevin has some exact transits to his Sagittarius planets; Mercury at 2 Sagittarius is almost exactly conjunct his natal Uranus at 2 Sagittarius. This promises a nice surprise and apparently he’s throwing everything at their show dance. Also, the Sun at 23 Sagittarius is honing in on his natal Neptune at 24 Sagittarius. Does this promise victory as the Sun illuminates the planet of dreams (Neptune)?

Plus, when I drew up the chart for midday (no time of birth available), it put his Ascendant at 8 Sagittarius 15. The Ascendant is the point in the horoscope that rules you. Notice lucky Jupiter on the day of the final. At the launch of the show it’s at 8 Sagittarius 16, almost exactly conjunct the ‘imaginary’ Ascendant I chose for Kevin.

Now this may just be wishful thinking on my part but I would truly love it to be a Stacey and Kevin win, even if the earth signs do usually dominate.

The astrology’s convincing but what do you think and who would you like to win Strictly 2018 and lift the glitter ball? Do let me know in the comments below. 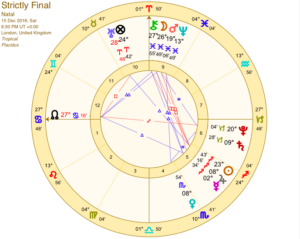