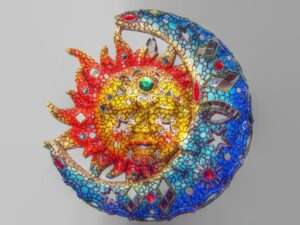 Laura is typical of a growing number of the younger generation who are turning to astrology, spirituality and ancient wisdom to help themmake sense of our increasingly unpredictable world.

Here’s the transcript from our interview:

“They say the moon is intrinsically linked to the timings of a women’s menstrual cycle as well as influencing the tidal movements of the ocean but how much do the planets really influence our lives? Capturing astrologers’ attention for decades, the planets can be an integral tool, guiding us along different paths.

To find out more about the zodiac and its  vast possibilities, I met with local astrologer and consultant to the stars, Sally Kirkman, at a pub in Guildford, to learn about the world of astrology and how it can be helpful in guiding us through life. 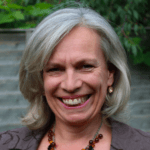 Sally Kirkman has an ongoing passion for symbolism, professionally beginning her journey with the planets 25 years ago after a friend asked, at a dinner party, whether she knew any astrology.

Professing the basic knowledge she had of the subject, Sally became hooked onto learning more. She started as a media astrologer writing columns and horoscopes before becoming a Consultant to the Stars, guiding people through tough times and good times with her expertise of reading the planets.

Astrology means, ’language of the stars,’ and astrologers believe that life on earth synchronises with the planets. To learn more about an individual’s journey, a chart is drawn up to reveal that person’s own alignment of planets.

Sally said; “when I work with clients – which I have been doing for 25 years – you would expect, when you draw up someone’s chart, that it’s going to mirror them, they are going to see themselves in it. It’s about concepts of yourself but also this is a map of your life, it shows your career, it shows your relationships, it shows your family.”

I took a sip of wine, intrigued to find out more…

Does everybody have a different chart?

You can have Time Twins who are born at the same date, place and time therefore you would have someone with exactly the same chart. Even then, it’s not going to play out exactly the same because astrology is a blend of fate and free will. The chart shows your potential but then it depends what track you take and what type of person you are and whether you are going to identify with the strengths and make the most of the potential in your chart or whether you’re going to be someone who is quite passive and doesn’t take the opportunities.

Tell me about how you create a horoscope for the media?

Horoscopes are very simple and sometimes simple works, it doesn’t need to get too clever. It’s looking at where the Sun is in the chart and what section the Sun is in tells you what area of life it represents.
If you’re very typical of your star sign then it’s likely to relate to you more. Sometimes you have the Sun and Ascendant in the same sign and then it’s likely that the horoscopes will be very accurate for you, so it depends.

Yes, and in fact reading horoscopes, I would suggest that someone reads their Sun sign and their Ascendant sign.

Do you believe in a meaningful universe?

Ilove that phrase and I think we are all seeking meaning or purpose on some level, the universe is always talking to you, there are always signs if you listen and the more you tune in the more you are just guided by that. Therefore it has a lot in common with spirituality, meditation, Law of Attraction all the things that have been popular again in recent times.

Do you think that the fascination with astrology and star signs will deplete?

I got into astrology in my twenties and that’s a major point in your life and as you move to 30 it indicates a major turning point. I think that is a time when you might start becoming more interested in it and understanding how it can help you more. I don’t think it will disappear and I think actually at the moment a lot of people are seeking something else, they’re seeking meaning and purpose and I think particularly we are going into a really rocky time.

There are some key planetary returns. This means when a planet goes all the way around the zodiac and comes back to the point it was when you were born. There are a few major ones, one is Saturn, which takes place age 29/30.

It’s the planet of maturity and it’s a time of life reassessment, so you take a long hard look at yourself. The Saturn Return is a time to knuckle down, take life seriously and think about where you’re heading. It can be a different experience depending on who you are and how far you’ve come already.

Can you get a sense for what’s going to happen throughout the year?

Yeah you can because the planets mirror what’s happening in the world and that’s something that a lot of astrologers are looking at…what’s happening now is very similar to the days before World War 2. The outer planets back in the 30s have the same pattern now repeating and we are on the verge of it dipping back.
What are your predictions for the coming years?

There are significant 20 year cycles and at the moment we are in the one which started in 2000 and the start of this was in Taurus which is about money in particular which is why it has been a big two decades for money.

The current decade is very much about power, dictatorship and a feeling that things have to break down before they can break through. A lot of the way governments, corporations, the financial world are working, it isn’t for the good of all and there’s a general consensus that 2016 was the most bizarre year with Brexit and Donald Trump.

The next one is 2020 when there’s a new cycle beginning. Then the astrology moving forward is very community orientated, humanitarian and I think what is happening is that we’re being called as individuals to make a difference…

Do you believe things do happen for a reason and that it might be left up to fate?

Sometimes life’s just rubbish, that’s the way it is, and you go through periods that are all about suffering and sadness and loss, it’s only when you come out the other end of that when you feel the strength.

The language of the stars translates differently for every individual. Resonating with me is the central message that the planets can provide an insight into the different paths of life, revealing opportunities to make a change.

In a world with abundant choice, dominated by the social media culture allowing for complete visibility into other people’s lives, it can be hard to find purpose and feel content with choices made.

Astrology can be a tool in guiding, educating and advising us about the finer details of who we are and is an inspiring avenue harbouring answers about our identities amidst the chaos.