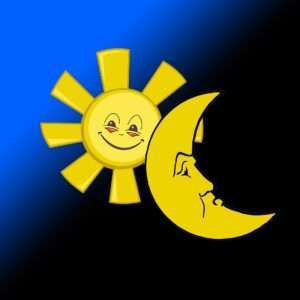 The Summer or Winter Solstice (depending in which hemisphere you live – north or south) takes place on Monday 20th June.

The Solstice is always an important turning point in the year when the Sun ‘stands still’, the exact meaning of the word ‘sol-stice’ and whether it’s winter or summer in your part of the world, there’s a shift towards a new season.

This Solstice is especially powerful because on the same day that the Sun enters Cancer heralding the change of season, there’s a Full Moon in the sky cutting across the Gemini/Sagittarius axis of the zodiac at the last degree of both signs, 29. A tipping point degree.

This means that at sunset on June 20th, you can turn your gaze towards both sides of the horizon and you’ll be able to see the Moon at its fullest on one side and the Sun shining bright on the other side.

This rarely happens and the symbolism it evokes is significant. A Full Moon is essentially an opposition between the Sun and Moon and this Full Moon falls across the signs which rule communication & words (Gemini) and religion & beliefs (Sagittarius). This ‘opposition’ will be clearly visible in the sky and the theme of ‘opposition’ is currently strong in our culture, our world.

I don’t know about you but I find that difference of opinion is verging on the rampant. You can’t put a quote on social media these days without someone counteracting what you back or approve of and, if what you’re saying is controversial, then all hell lets loose.

Last weekend, my friend and I drove round the East Sussex/Kent border counting the number of Vote Remain or Vote Leave banners – to be fair it was equal. Yet the UK is on the verge of an important EU referendum on June 23rd  – should we stay or should we go? – and whether you support the Vote Remain or Vote Leave campaign, everyone speaks with conviction and believes they are right.

It’s a similar scenario in the USA whether you’re a Trump or a Clinton fan. There are many more examples of this division in the world, taking sides, opposing views, believe what I believe, because I’m right….

So this potentially antagonistic Full Moon takes place on the same day that the Sun enters Cancer. Cancer is the sign which rules the home and the family, yet we all have different ideas about what home and family mean to us.

For some, family is an intimate affair whilst other individuals hold a wider view, the ideal of world family, uniting different cultures and the belief that ‘we are one’.

It’s perhaps important to remember as the Sun enters Cancer that many peoples’ actions stem from their desire to protect their family, to defend their nation, their country, right or wrong. Yet the current astrology shows clearly that we can can choose to divide (Full Moon) or unite (Sun Cancer).

In the UK, it already feels as if we’re on the verge of a major shift. Only two days ago on June 16th, an MP, Jo Cox, a mother of two young children, age 3 and 5, was murdered by a man who allegedly shouted ‘Put Britain first’. Whatever he said, you can still argue that this sad and tragic loss is because of what Jo Cox believed in.

Looking at the birth chart for Jo Cox, it’s perhaps not a coincidence that she was a Solstice baby, born on June 22nd 1984, with her Sun at 0 degrees Cancer, the sign of the family. One of the quotes attributed to her has stayed with me:

“We have far more in common than that which divides us”.

This is such a powerful message of the Sun in Cancer. Here are some examples of well known Sun Cancer individuals:

Dalai Lama, b. July 6th 1935 – the spiritual leader of Tibet and a major influence on the peace movement throughout the world.

Princess Diana, b. July 1 1961 – d. August 31 1997 – A typical Sun Cancer in her role as a loving mother but in addition she also became renowned for her humanitarian work.

Malala Yousafzai, b. July 12 1997 – The youngest-ever Nobel Prize winner, Malala is known around the world as ‘The girl who stood up for education and was shot by the Taliban’ – the tagline of her successful biography, ‘I Am Malala’.

Richard Branson, b. July 18 1950 – his work is his family. Here’s what it says on the Virgin Linked-in page: ‘Virgin Group companies are part of one big family rather than a hierarchy. They are empowered to run their own affairs, yet the companies actively help one another and solutions to problems are often sourced from within the group. In a sense they form a commonwealth, with shared ideas, values, interests and goals.’

It would be easy for me to spout my own beliefs at this point but I simply want to leave you with the symbolism of our current astrology. The Full Moon flags up opposing beliefs, yet the Sun entering Cancer on the day of the Solstice speaks of unity.

Who is your family, where is your home? These are the questions that require careful answering.

Finally, let’s return to the traditional symbolism of the Solstice. This is a time of celebration when fires are lit in honour of the life-giving Sun and people gather at ancient sites like Stonehenge to watch the sun rise.

Whether you wish to honour this key marker in the annual calendar with a yogic Sun salutation, a bonfire, a quick jaunt to sunny climes to top up your tan, celebrate the power and vitality of the ever-present Sun.

Here’s wishing you a happy solstice and may it bring light into your own life.