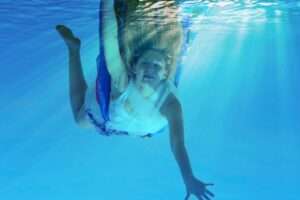 This is New Moon energy and great for initiating change (although tradition states you’re wise to wait a few days before making any major decision).

A solar eclipse is a New Moon with extra oomph because it links in to the karmic nodes. An eclipse can represent a twist of fate, those turning points in life which, when you reflect on them in later days, you recognise how important they were.

The degree of tonight’s solar eclipse is 18 Pisces 56 so it’s especially important for you if you have key planets or angles within 1 degree either side [18-20 Pisces].

Eclipses don’t always trigger change on the day itself because they are part of a wider cycle and this time around, it’s the signs of Virgo and Pisces which are highlighted. Here are the dates, degrees and the type of eclipse in this particular eclipse cycle:

Note that the majority of these eclipses are solar which means this is primarily about you and your decisions in life. Lunar eclipses tend to focus more on relationships.

What does the eclipse mean for you?

So what does this eclipse mean for you? We know that the sign of Pisces is boundless. Think of the symbolism of the sea, a creative whirlpool filled with magical beings and vast undiscovered depths. Pisces is one of the water signs, linked to emotion, instinctual behaviour and the unspoken realm. This is where imagination and inspiration reside, psychic occurrences, life beyond the everyday.

The Sun and Moon sit next to one another during an eclipse, the start of a new lunar cycle. Yet other planets are drawn into the eclipse pattern (see chart below). The Sun and Moon are opposed by Jupiter in Virgo, the planet of opportunity which expands what it touches and they are conjunct Chiron, the wounded healer, linked to suffering and healing.

In addition, Saturn in Sagittarius is square to the eclipse duo. Anything is possible (Jupiter) but then reality kicks in (Saturn). We are lead by our compassion (Pisces) but our beliefs can be dashed by fear or restriction (Saturn). ‘I want to help, but…’

There are two more planets in Pisces applying to a conjunction and they are Mercury (communication) and Neptune (compassion/confusion). This adds to the Pisces theme and when you let your imagination run wild or you let loose your compassion, miracles can happen. That’s the theory. Yet at some point you need to tie down those brilliant ideas, harness that creative energy and keep one foot on solid earth whilst your heart remains open.

Here are the areas of life represented by Pisces depending on your star sign. Read both your Sun sign and your Ascendant sign if you know it:

When writing about astrology, I’m always looking for a story which mirrors what’s happening in the planets. ‘As above, so below’ is a phrase widely attributed to astrology. Astrology is not causal and the planets don’t make us do things. Yet when you’re in sync with universal law, you’re in flow with life.

Pisces rules romance and falling in love is another way to find bliss, to escape reality, to seek out something more. One of the strangest love stories this week was the marriage of Rupert Murdoch and Jerry Hall. An ex model, famous for being Mick Jagger’s partner, falls in love with a media magnate, one of the biggest names in publishing today. Between them, they have 10 children and there’s a 25 year age gap.

When I first heard about this unlikely union, I didn’t believe it was possible. Yet looking at the synastry (love compatibility) between them, you see the strength of their connection. Rupert Murdoch is a Sun Pisces and with his Sun at 20 Pisces, today’s eclipse is powerful for him, a moment of destiny. Jerry Hall is a Sun Cancer, another water sign, and the Cancer/Pisces connection is caring and kind.

There’s no time of birth for Jerry Hall but her Sun in Cancer is trine Mars in Pisces and Mars represents the man in a woman’s life. Here’s her ‘Pisces’ man.

The best bit of stunning synastry is Rupert Murdoch’s Jupiter at 10 Cancer conjunct Jerry Hall’s Sun at 10 Cancer. Jupiter expands what it touches and this is a joyful connection. It feels wealthy and abundant and both of them looked immensely happy at their huge family affair of a wedding, perfect for their Sun/Jupiter in Cancer (family) connection.

Who would have believed it? An unusual union which was meant to be. Believe the impossible during this solar eclipse. Release your judgements and see how expansive your creativity and your heart can be. Let your spirit soar. 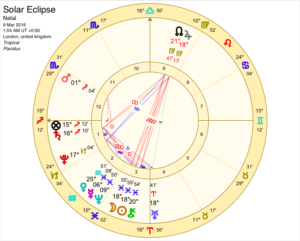