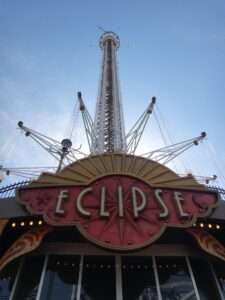 This week’s Solar Eclipse takes place in the star sign Aquarius, one of the most complex and, at times, misunderstood signs of the zodiac. Take these contradictory facts about the Sun in Aquarius:

You can see that it might take the average Aquarius (if there is such a thing!) a while to discover who they are and what makes them tick with such a complex set of star sign attributes. An archetypal Sun Aquarius invariably marches to the beat of their own drum.

A Solar Eclipse is effectively New Moon energy, a chance to start over and initiate action. This eclipse is unique because it’s the only Solar Eclipse in Aquarius in the current Leo/Aquarius eclipse cycle (August 2016 to January 2019).

Plus, it happens two weeks after the Lunar Eclipse at 11 degrees Leo/Aquarius (a symbol of endings), which took place on January 31st, 2018. One door/one chapter may already be closed or complete and you’re aware that it’s time for reinvention or renewal.

As with all eclipses, hidden factors may emerge and the pace of life speeds up and is intensified. This is potentially an exciting eclipse because it pulls in an electrifying planetary aspect between Mercury (communication/mind) at 25 Aquarius and Uranus, Aquarius’ co-ruler and planet of spontaneity, at 25 Aries. Think sudden flashes of inspiration, revelatory insights, creative conversations.

All these factors combine to suggest that progress can be made super fast this week. In fact, some of your moves could be downright genius and brilliant. If you’re waiting for a breakthrough or you’ve felt stuck in the first half of February, listen carefully to what life’s telling you and see where new opportunities emerge. Exciting news or information could emerge close to the eclipse or perhaps one conversation changes everything.

Note: This eclipse is a mirror image of last year’s total Solar Eclipse at 28 Leo 53 on August 21, 2017, which was seen across the whole of the United States. It too was closely connected by trine aspect to unpredictable Uranus. This time around, Uranus plays a pivotal role as Uranus is co-ruler of Aquarius so expect the unexpected and embrace change.

Here’s a quick guide to which area of your life is in the eclipse zone. Read both your Sun sign and your Ascendant: 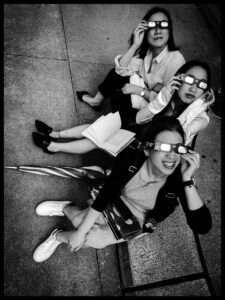 On the day of the recent Lunar Eclipse, January 31st, 2018, I watched a programme on the BBC entitled Wonders of the Moon. An hour-long programme celebrating the wonderful magical display of the Goddess of the Night.

One of my favourite clips in the programme was seeing American school kids totally delighted and thrilled as they witnessed the awesome sight of last summer’s Solar Eclipse. It truly is a magnificent natural event to witness if you ever get the opportunity. 1999 was the big year in the UK when there was a total eclipse of the Sun in the southern parts of the country.

You may have noticed that this week’s Solar Eclipse isn’t big news in the media. This is because it’s a partial eclipse, so the light of the Sun isn’t completely blotted out, and it’s only visible in southern extremes of our earth.

This week’s Solar Eclipse is still powerful, however, within astrology, as it’s triggering key houses or areas of your horoscope. Plus, it’s particularly significant if you have planets/angles close to 27 degrees of the fixed signs (Taurus, Leo, Scorpio, Aquarius) or the fire & air signs (Aries, Gemini, Leo, Libra, Sagittarius, Aquarius), within a 2 degree orb.

In this case, the Solar Eclipse in Aquarius may coincide with a major turning point or a seed is sown that leads you down a new path before the next set of eclipses in July & August 2018. As for any New Moon, see where you can take advantage of a fresh start in life.

Tradition states that you’re wise to wait a few days after an eclipse before making a big decision or taking action. This is because an eclipse often brings what’s hidden to light. Meditate on the eclipse, be still, listen to your inner guidance.

What’s foreground, significant; what’s hidden, in the shadows? Trust whatever’s bubbling away and set your intentions to take advantage of this week’s innovative and energetic Solar Eclipse. Be Aquarius and march to the beat of your own drum.