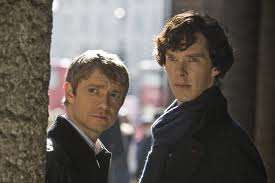 Writing this on a Sunday night, I’m already having withdrawal symptoms from the exceedingly short Series 2 of Sherlock Holmes. 3 episodes only, what was that all about?!! Having said that, I loved them!

The programmes work so well partly due to the fantastic acting and brilliant bromance between the two main stars, Benedict Cumberbatch (Sherlock Holmes) and Martin Freeman (John Watson). If you look at their Sun signs, they are quietly compatible in an understated but easy relationship, which in astrology speak is termed a ‘sextile’ aspect.

Benedict (b. 19 July 1976) is a Cancerian and Martin (b. 8 September 1971) is a Virgo. Cancer is the sign most closely associated with the home and of course Sherlock Holmes lives at one of London’s most famous addresses in London, 221b Baker Street. In the TV programme, Martin is Sherlock’s assistant, a perfect role for Virgo, and Sherlock’s sometimes flatmate. In fact, some of the best scenes are set in the flat and it’s where Sherlock retreats to and feels most comfortable, typical of his Cancerian Sun. Home is the place where he can access his brilliant and original mind.

The scenes at home wouldn’t be the same without Mrs Hudson, played by the inimitable Una Stubbs (b. 1 May 1937), who is unbelievably 75 this year and looks fabulous on it. She’s a Taurean, so her sign is compatible with those of both Bendict and Martin. Taurus and Cancer also make a ‘sextile’ aspect and Taurus and Virgo a ‘trine’ aspect as they’re in the same element,earth. I’ll be blogging about both these connections over the next few weeks in my love compatibility series. Hurry up with Series 3 of Sherlock Holmes, please. Sunday nights aren’t the same without you.