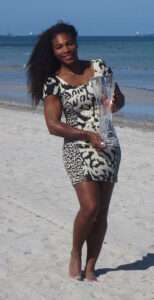 My tennis predictions which began in 2012 for the men’s tennis have become one of the most popular articles on this website.

I tried to predict the women’s tennis but to no avail. The astrology didn’t make sense and there were so many different female tennis players vying for the top role.

One woman has stood out for years in tennis although she’s had chapters when she’s been less successful but recently at 33 years of age she’s breaking records again.

That woman is Serena Williams [photo on left] and after this year’s Wimbledon win, I decided it was time to examine her chart (see below) to find out what makes her such a formidable champion and an incredible role model to women and girls worldwide.

Serena has a Taurus Ascendant. The Ascendant is the sign that was rising when you were born, it’s how you come across to others, it influences your appearance and is the cover on your book. A Taurus Ascendant fits Serena beautifully as Taurus is one of two signs ruled by the feminine planet Venus, the other being Libra.

There’s strength in Taurus and Serena is incredibly gorgeous, voluptuous even. She has a stunning body, powerful and muscular, but oozing sensuality. Serena has recently been the victim of body-shaming on the internet but it was J K Rowling who had the last word when she called someone an idiot who suggested that Serena looked like a man.

I think it’s important from an astrological viewpoint that we remember there are many aspects to Venus and even though in modern culture we often associate femininity with a girly kind of prettiness, in mythology Venus/Aphrodite was a strong woman, as capable of being a warrior as a seductress.

Serena’s Sun sign is Libra, the second sign ruled by Venus, so here’s more evidence that Serena is a classic example of Venus, both graceful and strong. With her Taurus Ascendant, Venus is her ruling planet in sexy Scorpio. This is an intense placing for Venus as Scorpio is its sign of fall. This is not a tender placing for Venus but rather emotions are held in check, kept secret even, although on the inside there’s passion and power. Serena does give off an air of mystery, congruent with Venus in the sign of intrigue and control.

Venus is square to Mars in Serena’s chart so the relationship planets, male v. female, are in conflict, they clash. This adds a competitive nature to her personality which is appropriate for her profession. My other half loves Serena and mentioned repeatedly throughout the Wimbledon tournament that Serena could take on some of the men’s tennis players and win.

The tennis court is a brilliant arena for a combative nature but it’s not so easy to transfer the Venus/Mars clash into your personal life. Mars in Leo loves to play, again competitively. This is a confident Mars, enthusiastic, charismatic and strong.

Serena’s chart is unique in that all the planets (not including Chiron) are in one third of the chart. This chart shaping is called a ‘bundle’ and it places focus on a concentrated area of life. The sector of Serena’s chart that leaps out at you is the 6th house where you find no less than six planets. This area of the chart rules work, routine, health and lifestyle. It represents how you lead your life on a daily basis.

Serena embodies the hard-work ethic which was instilled in her at an early age. She started playing tennis age 3 and both Venus (her elder sister) and herself were home-schooled by their father who remains their tennis coach today. You can see the dominance of both parents in her chart as the Moon rules the mother and Saturn rules the father. Serena’s Sun is sandwiched between the two. They have always been a powerful influence in her life.

Serena’s Moon in Virgo gives her the ability to hone her craft, a helpful technique for a tennis player. Accuracy is paramount. The Moon in Virgo is precise, persistent and a perfectionist. Whoever sets the high standards, Serena expects herself to live up to them.

Plus there’s a stellium of planets in the sign of Libra in the 6th house. A stellium is 4 or more planets in the same sign, each one conjunct the adjacent planet (i.e. within an 8 degree orb). Like the chart shaping, the stellium in Serena’s chart is a focused energy, intense and determined. This is a woman who will not give up easily.

Saturn is the ruler of Serena’s Capricorn Midheaven representing her career and it’s dignified in the sign of Libra. A Capricorn Midheaven fits Serena’s ambitious nature and like the tenacious mountain goat she’s always lining up the next mountain to climb. Saturn in Libra reflects her relationship with her sister as Libra is the sign of partnership and Serena’s doubles results in women’s tennis are almost as impressive as her single’s titles.

Jupiter adds vision to the stellium, Pluto adds laser focus and Mercury is the dexterous planet, so often powerful in tennis player’s charts. Nimble, fleet-footed, the messenger of the heavens. Serena’s Mercury is conjunct her Descendant, the relationship point of her chart and again this alludes to her sister, Venus, as Mercury rules her 3rd house of siblings. Even though Serena now dominates the tennis, they still put on a double act, either competing against each other or supporting each other.

When I picked out some of the key moments in Serena’s career, one planet stood out and that was Pluto. Pluto is at 23 Libra in Serena’s chart, the degree of an important fixed star, Spica. The ancient texts read: ‘The most fortunate star of the zodiac, of the nature Venus & Mars. All matters prosper under her influence’.

If you watched Serena playing tennis at Wimbledon, you would have witnessed her indefatigable strength of will that refuses to let her give in or give up. She was incredible against the Brit Heather Watson who nearly defeated her. It’s as if Serena can come back from the dead in a tennis match time and again, which fits the powerful Pluto symbolism in her chart, God of the Underworld. Serena’s Venus in Scorpio coupled with her strong Pluto add power and control to the mix.

Serena first became world no. 1 on July 8th 2002 although she won her first Grand Slam in 1999. In 2001 Serena’s progressed Sun was conjunct her natal Pluto shining a light on her undeniable strength. In July 2002 when she became world no. 1, the progressed Moon was exactly trine her Pluto. Her first ‘Serena Slam’, holding all four Grand Slam titles at once was in the 2002-2003 tennis season.

This year in January 2015, her progressed Venus was sextile Pluto lighting up this powerful planet again, plus by transit in July 2015, Jupiter, planet of success, was almost exactly sextile her Pluto on the day of the Wimbledon final. Her second ‘Serena Slam’ achieved, the holder of all four Grand Slam titles once more and 21 Grand Slam titles in the bag.

So what next for Serena? Will she win the US Open later this year and achieve a Calendar Grand Slam, all four Grand Slam titles under her belt in one year. This would also equal Steffi Graf’s record of 22 Grand Slam titles. I would say she has every chance of doing so and knowing Serena, she’ll try and go one better.

There are a couple of question marks in her astrology as all four eclipses in September 2015 and March 2016 connect to her natal Sun and Moon hinting at major changes to her life. Plus transiting Jupiter will conjunct her Moon first in November 2015 and again in February & July 2016.

Jupiter then goes on to transit her Sun in Libra by conjunction in September 2016. This has to be linked to family as the Moon rules her 4th house, the family sector of her chart, but as the Moon is the traditional symbol of the mother and the Sun rules her 5th house of children, does this indicate a baby Serena on the way? That would certainly be a new life path for the famous tennis star.

Personally, I’d love her to win at least one more Grand Slam before that to ensure she’s remembered as one of the best if not the best women’s tennis player of all time.