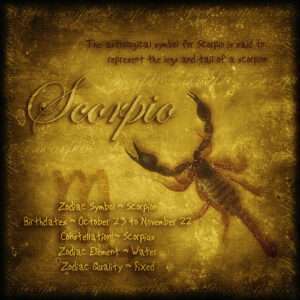 Saturn has now been in your sign of Scorpio for a month and it’s always an important period when a major planet ingresses into a new sign as it brings with it a new wave of influence.

Saturn’s the ‘tough cookie’ planet and in Scorpio this brings out your inner grit, determination and steeliness. It makes you more ambitious and more determined to pursue personal goals but it’s not a soft and fluffy influence in your life by any means.

Your sign Scorpio rules the taboo issues in life; sex, money, death and rebirth and one or more of these issues may now be high priority, seeing what needs to change and finding a way to set new markers in place that help you achieve your personal goals.

The nodes are closely linked to the movements of the Sun and Moon and the eclipses focus on the Taurus/Scorpio axis of the heavens from now until 2015, the same time period as Saturn in Scorpio. The first eclipse takes place on the 13th and falls in your sign of Scorpio. Eclipses do tend to mirror dramatic events and when you look at them, they often coincide with a pivotal turning point in your life. The eclipse symbolism is about shadows, something been hidden that suddenly emerges and comes to light. The eclipse on the 13th coincides with Mercury’s backward movement into Scorpio on the 14th so there’s a theme of reversing in your chart. You may find you want to review or revise your goals or where you’re heading or you may have second thoughts or change your mind about a key decision.

This is of course your main birthday month and often a time when you look at the year that’s been and what you want to achieve in the coming year. This focus on you is intensified and it may be that external events decide your next steps for you. Or another person who plays a key role in your life, whether a personal or professional relationship or partnership, has a part to play. This is because Venus is your partner planet and on the 22nd Venus also enters Scorpio and teams up with Saturn on the 27th.

There’s so much going on in the heavens it’s difficult to note it all down. The spotlight is on you, however, and deciding or readjusting what next in life. It’s never the best time to make a decision when Mercury’s retrograde and the day after Mercury turns around in the heavens on the 26th, both Venus and Mars are in a powerful position. However, it’s what you say No to that is as important as what you say Yes to, and it may be that only by wiping the slate clean and beginning again can you start to make significant progress.

There’s a second eclipse on the 28th that cuts across the money sectors of your chart so finances too are key in your development and next stage in life. For some, this may be a tough decision about what to let go of and what you can actually afford. Extra expense may come in or the opposite, a cash bonus that you weren’t expecting. Life plays out in mysterious ways, as you Scorpio understand more than most, and by tapping into life’s synchronicities, you can feel your way forward and instinctively know what you should be doing.

In some way, communication is going to be very powerful too whether you’re in the process of writing a book, speaking in public or simply speaking up. The intensity is being cranked up and it’s only by being bold, learning when to say No and when to accept a new and testing challenge that you can make big steps in life and move onwards and upwards.

It’s not the easiest of months with hidden information, big events and some tough learning but you are a sign that knows how to transform your life for the better and how to survive successfully. So step up to new challenges, pare down your life so it works for you and focus on your future goals. By month’s end you can start to see more clearly where you’re heading in 2013 and who’s going to be loyal and faithful and by your side.