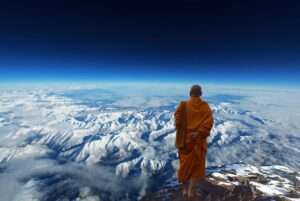 This is a big month ahead and if you play your cards tonight, you can be better off not only financially but also professionally.

Or at least you will feel as if you’re back on track with your long term goals, your dreams, your vocation.

The major player in the heavens this month is Jupiter, the biggest planet in astronomy and the best planet in astrology. Jupiter is currently in the sign of Leo up at the top of your chart where it’s been since July 2014. This sector of your chart rules your career, your status and reputation, your future and where you’re heading.

As Jupiter is the planet of luck and opportunity, this is the time to think big, to be expansive with your plans and ideas and to break free of any situation that traps you or holds you back. Jupiter is now moving forward in Leo and will leave this sector of your chart in August 2015. First however Jupiter makes a stunning trine aspect to Uranus on the 22nd of this month.

This is the third and final time that these two planets meet in the heavens. They first came together in September 2014, they met for the second time in March earlier this year and this is the third connection and the most powerful.

Jupiter and Uranus were sky gods in mythology so this feels expansive. It might symbolise a breakthrough or a chance to break free. Uranus represents the unexpected, the opportunity that comes out of the blue, a chance to do something exciting that’s bang on target.

This is definitely about your work, your routine, your lifestyle as Uranus is also in one of the fire signs, Aries, which rules these areas of your life. Plus, it’s about money, creating partnerships that work for you, setting yourself up for the future.

This is because Jupiter and Uranus link nicely to planets in Gemini and your joint finance sector throughout June. Most importantly for you, your ruling planet, Mars, is in this sector of your chart until the 24th. Mars is the action planet and wherever you find Mars is where you can channel your drive, your focus, your determination.

Mars connects with Jupiter and Uranus on the 5th and 9th and the Sun in Gemini connects with these two powerful planets on the 8th and 10th. These are key dates for you to push ahead with your plans, ideas, ambitions. Look out for new opportunities that come in to your life.

Plus, Mercury, the planet of communication, turns direct in Gemini on the 11th and this suggests a major turning point. If you’ve been waiting to hear news about a money or financial matter, this is when the planets turn in your favour. New information often comes to light when Mercury turns direct. It’s the equivalent of a green light, the switch flicks from off to on.

If you want further confirmation that things are starting to move in the right direction, then note the New Moon in Gemini on the 16th. New Moons symbolise new beginnings, a chance to start over, a positive date to launch a project. Gemini rules all forms of shared resources and joint finances, such as savings, investments, loans, taxes, insurances, mortgages, an inheritance.

This is about alliances, partnerships that can help you and boost your prospects. Whether you need to speak with an accountant, your bank manager, whether you’re interested in setting up a business partnership or joint venture, whether you’re sorting out money matters with an ex or current partner, it’s all stations go.

The partnership theme is confirmed because on the 5th of the month Venus, the planet of relating, enters Leo and your career sector. Venus remains in this part of your chart until early October, apart from two weeks when Venus is in Virgo in late July. This is a brilliant time to forge a new business partnership, to seek out a role model, to team up with people who inspire and influence you and ultimately can help you be successful.

You might be considering a new job or a new path with your current partner and if you’re looking for love, you’re most likely to find it through your work or what you do for a living. Venus in Leo is the rich lover, a partner who has wealth, status or both.

If you’re in a relationship or marriage, this spells good news for your other half, e.g. a promotion, positive progress at work, a time of career or life satisfaction. The 29th of the month, when Venus teams up with the planet of surprises, Uranus, is a date to watch. Venus-Uranus = love surprises.

So far, it all sounds very positive, yet as you know life is full of ups and downs and the challenges that life brings are where you learn your lessons. Your astrology suggests that there is a repeat lesson or a problem from the past is back for you to examine once again. This is because Saturn, the taskmaster of the heavens, returns to your sign of Scorpio on the 15th where it remains until September 18th.

This is a relatively short transit of Saturn in your sign, three months, but as Saturn was here from October 2012 until December 2014, you might already know what to expect. Saturn represents hard work and effort, discipline and commitment.

When it’s in your sign, you can at times feel low in energy or your mood is low. You have to be wary of viewing the glass half empty and not let yourself spiral into self-destructive behaviour. So do whatever works for you to keep a positive attitude and at the same time pace yourself. Saturn in your sign might mean that you’re working on a project over the next few months which will take up a lot of your time and energy.

The excitement this month is around work, career, vocation, money. It feels like an adrenalin rush and perhaps you have to be careful of going over the top, becoming too intense, throwing yourself obsessively into a new project or chapter in your life.

Both the Sun and Mars enter Cancer and your travel sector on the 21st and 24th respectively, so remember to keep a sensible, happy perspective when it comes to your work/life balance.