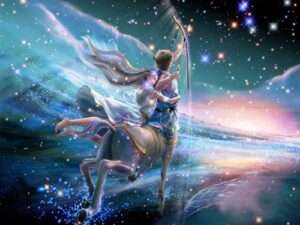 As the month of September begins, there’s a ‘back to school’ vibe in the air. The Sun is in the earth sign Virgo ruling your career and vocation and earth signs are all about getting practical, working hard and seeing things through to completion.

So after the sunny atmosphere of August when there were a bevy of planets in your fellow fire sign Leo, it’s time to become studious and pay attention to the more serious side of life. In fact, this is an excellent month to crack on and make some headway with an important project, money matters and career goals.

The Sun remains in Virgo until the 23rd but is joined on the 5th by Venus and she remains in Virgo until the 29th. This is your cue to create a strong team around you, to work alongside others in collaboration and to use and schmooze your contacts. When Venus is in your career sector, it’s who you know that can propel you forward to the next stage. As Venus rules women, look out for a powerful female who becomes a role model or backs you to further your own career.

Both the Sun and Venus in Virgo make a trine or helpful aspect to Pluto in Capricorn and your money sector on the 3rd and 14th respectively. Pluto’s a powerful planet but when it’s supportive, it can bring a little magic your way. Use these dates to transform your situation and improve your finances or earning ability. Talk to your boss or a bank manager and prove that you’re capable and hard-working.

The Sun and Venus also catch up with Saturn in your previous sign of Scorpio on the 11th and 21st and again here’s the theme of working hard, getting organised and preparing yourself for the months ahead. Saturn will enter your own sign of Sagittarius at the end of the year so anything you can do now to pave the way, tie up loose ends, create a game plan for 1 year or even further ahead, the better.

This energy isn’t about winging it. Instead it’s about looking to the long-term future and doing all you can in the present day to ensure you’re as ready and prepared as you can be.

The planet Mars enters your sign of Sagittarius on the 13th and this adds drive and ambition to your toolbox. Mars is the planet of action and energy and you may experience a sense that life’s speeding up and if you take tight hold of the reins of your life you can take charge and direct where you’re heading with confidence. Mars in your sign puts the spotlight on your personal goals and ambitions outside of work.

There is one planet that’s pulling you back this month, perhaps reminding you of your past or where you come from and that planet is Neptune. Neptune is currently in Pisces down at the base of your chart ruling your home and family but also your roots. Neptune is a shifting planet symbolised by the boundless nature of the sea and it’s hard to root yourself when Neptune’s in this sector of your chart.

You may feel for some reason or other that you’re standing on shaky ground and that your foundations are moving. There may be a sentimental attachment to your past or strong emotions linked to family members. Watch out on the 10th and the 22nd when Neptune is in conflict with Venus in Virgo and Mars in Sagittarius respectively.

There’s likely to be doubt or confusion around a relationship or family or you find that someone’s not been completely honest with you. Neptune is a romantic influence but also rules deceit and illusion. When in doubt, ensure you get the facts and don’t act based on rumour or your own feelings.

The 9th/10th are especially emotional when there’s a Full Moon cutting across the Virgo/Pisces axis of your horoscope. This highlights work v. home/family in its simplest form. If you’re pulled between the two, it’s your work life which feels steady now and it’s through committing to a project, job or long-term goal that you anchor yourself on solid ground.

Perhaps you sense that a relationship’s shifting or changing and with Mars in Sagittarius there’s an urgency to either fall in love or sort things out. Rather than charge in head on, look out for more subtle influences that give you a clue as how best to proceed.

Friends are there for you too as Mercury, the communication planet, is in Libra and your friendship sector from the 2nd-27th. This is good news for all group endeavours, networking and being sociable. Even if it’s a month of hard work, there’s still plenty of opportunity to play and have fun.

Mercury clashes with the Uranus-Pluto square on the 9th and 13th but this is a repeat issue of a situation you know all about it. It may involve money or love and its best not to go there otherwise you fan the flames. Your ruling planet Jupiter is also involved in the mix in a supportive aspect and Jupiter is currently in your fellow fire sign of Leo. Adopt a philosophical stance and refuse to get involved in petty arguments. Look at the bigger picture and remind yourself what really matters in life and what’s important to you.

Jupiter is a big-hearted generous planet and truth and justice are paramount to your sign. Jupiter is heading for a wonderful trine aspect with Uranus in Aries on the 25th and these are the two freedom-loving planets of the heavens coming together. Fire signs, like your own sign of Sagittarius thrive on excitement, enthusiasm and inspiration. Take hold of any new opportunity that comes your way in the last week of the month, especially if it’s to travel, study and allows you to spread your wings and broaden your horizons.

This feels especially lucky so tap into your lucky nature, believe you can achieve the impossible and you never know what might happen. As this connection falls the day after a New Moon in Libra, it’s through a friend or group in which you’re involved that success happens. There’s a positive vibe to the end of the month and it’s a brilliant time to make a fresh start and be spontaneous.