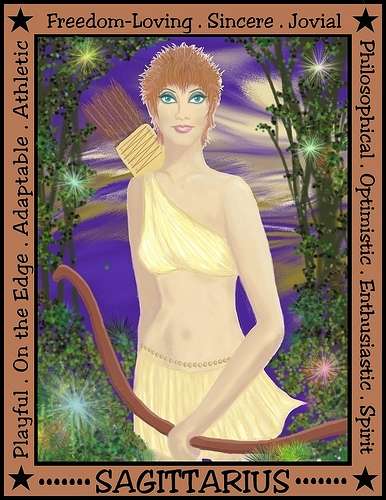 Let’s focus on the fire elements first before delving deep into the water signs. As August begins, the Sun is in your fellow fire sign of Leo and this is a nice placing of the Sun for you as it rules the sector of your chart that your sign Sagittarius has natural affinity with. In other words, the spotlight’s on travel, education and expanding your horizons.

There’s a New Moon in Leo on the 6th a brilliant day to initiate new beginnings that take you on an adventure or open you up to new experiences.

Whether you’re off on holiday, planning a big trip or signing up to a course, keep the momentum of life going and think what next, where next. Leo’s in the ninth house in your chart which also rules publishing, the Law, religion and spirituality so lots of options where to channel your energy.

Two days in particular bring added highlights when the Sun on the 4th and Mercury (communication) on the 15th team up with spontaneous Uranus in the third fire sign of Aries. If a new opportunity comes in to your life on or around these dates, be impulsive and grasp it with both hands.

Mercury remains in Leo from the 8th-23rd but there’s more to come in fire signs as Mars, planet of action, also enters Leo on the 28th. What takes place this month and whatever steps you take however small towards a new adventure may grow into something hugely important in a year’s time when your ruler Jupiter also enters Leo on July 16th 2014. If the idea of moving or emigrating is a tiny idea for now, don’t be surprised if life’s events conspire to lead you in that direction. Same goes if you’re thinking about writing a book or becoming a teacher. It’s the little acorns that you plant this month that can grow into huge oak trees in 12 months time.

Your career is also under the cosmic spotlight this month with Venus in Virgo and your career sector up until the 16th suggesting that you’re wise to use your contacts at work and to keep on the right side of a boss, preferably female.

Then on the 22nd the Sun enters Virgo swiftly followed by Mercury on the 23rd so this is a good time to be thinking about your next steps with regard to work and career and most importantly to get organised and create a plan. Virgo loves list-making and writing down goals so they can be ticked off when they’re completed. It’s the planetary equivalent of getting ready to go back to school and a good time to update your CV, apply for a job and have your game plan ready for September.

There is the small matter however of planets in water signs that do seem to be slowing you down a little. At least you’re currently rowing in the right direction as Mercury, planet of communication, was retrograde in Cancer last month and as August begins it’s heading forward again.

An important date is the 4th when Mercury finally moves out of its Shadow phase. This means that it’s back at the place in the heavens where it was when Mercury turned retrograde on June 26th. As Cancer rules your joint finances, there may be movement with regard to monies owed or money that’s linked to other people or institutions. Mercury will bring good news or new information to light on or around the weekend of the 3rd/4th.

In addition, Mars planet of action is in Cancer until the 28th so you’re wise to have a financial plan as well as a career plan this month. It’s a good idea to implement a personal financial audit and check that your money’s doing the best it can, i.e. that you have the best possible deals and that you’re not letting cash slip through your fingers.

Mars benefits from an assertive approach so chase up money owed and confront any person or company that thinks your cash is theirs.

The other important planet in Cancer is Jupiter, your ruling planet, and although Jupiter entered this sector of your chart on June 26th, it’s important to note that this was the same date that Mercury turned retrograde. So even though Jupiter promises new opportunities and potential wealth in your joint finance sector, you may have found that the promise has been lacking up until now.

This month Jupiter meets up with the Uranus-Pluto square in the heavens; on the 7th Jupiter opposes Pluto and on the 21st Jupiter squares Uranus. This ups the game and has the potential to change things and quickly. A Jupiter-Pluto opposition suggests hidden riches and there may be a battle this month for money that’s rightfully yours. Win the battle and you can expect an extra bonus, an inheritance or investment perhaps.

Jupiter’s strong in Cancer as well as it’s the protective planet in the sign of nurturing. If you’re supporting your family or your money’s tied to your past, there could be significant developments this month and a chance to break free of a situation that’s been holding you back. Where Pluto’s concerned, you can never guarantee a win-win situation but fight for what’s rightfully yours, especially if you’re in the right legally or ethically and you have a good chance of success.

Certainly you’ll know where you stand financially by the end of the month and if you play your cards right and team up with the right people, you could also be significantly better off.