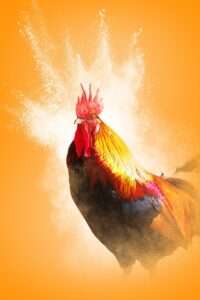 Your ruling planet Jupiter turns retrograde this month on the 6th and begins to retreat through Libra and your friendship and group sector. Jupiter remains on go slow until June.

This is often a subtle planetary event and you may not notice anything in particular. When a planet is retrograde, it’s said to be weakened. In addition the emphasis turns inward rather than outward.

Your planet Jupiter remains active in the heavens especially on the 11th and 21st of this month, both positive dates for you. Plus Jupiter is heading back towards its second opposition with Uranus early next month.

So themes of liberation and freedom remain dominant, perhaps breaking away from a group or set of friends or pulling back on your commitments. Certainly this is a month when you will want to play and have fun and leading a relatively free lifestyle could be part of this.

The reason for the emphasis on play and fun is because of the planets Mars and Venus. Action planet Mars spends all month in your fellow fire sign of Aries and Venus joins Mars on the 3rd. So this is where the energy is strong and Aries rules your creative sector, children in your life, love affairs and romance, fun and entertainment.

There might be a specific reason why you want to spend more time letting your hair down, having fun, socialising, being free. Or it may be that other people step in to liven up your life. The kids if you’re a parent, a new set of friends, a new love interest.

This could herald the beginning of a new and passionate love affair and as Venus, planet of love, spends most of the next four months in Aries, one that takes over your life. However, be aware that relationships and love are likely to be a stop-start affair for a while and certainly nothing feels settled until later in the year.

That shouldn’t stop you having a good time however although there is one scenario that flags up a potential warning. If you get involved with a friend now or you end up in a ‘friends with benefits’ situation, this could get messy towards the end of the month.

The same goes if you can’t help flirting with a friend who’s unavailable. Playing the field and letting your emotions lead you could be a dangerous game to play towards the end of February.

Try to rein in the more impulsive side of your nature around the 27th. You may be tempted to dive into a situation head first but this feels volatile so avoid any overly-risky behaviour.

It’s a similar scenario with money this month, i.e rein in any impulsive spending, investing or gambling, especially at the beginning and end of the month. Have fun now but don’t get hurt emotionally or financially.

This is also a month when learning and education are foreground. In fact, there’s a new eclipse cycle getting underway this month that links in to these areas of your life. The Lunar or Full Moon eclipse on the 11th lights up the Leo/Aquarius axis of the zodiac and this is about adventure, knowledge, teaching and studying, religion and finding meaning in life.

This eclipse mirrors the ‘almost eclipse’ of August 2016 so it may be that you’re enthusiastic about something which began back then. This is the beginning of an eclipse cycle which lasts until January 2019 so consider what you want to do differently now, with regard to travel, study and the side of your nature that’s constantly seeking.

The eclipse on the 11th gains support from other planets so you may find yourself in the thick of the action, coming together with a group in the name of a good cause or setting off on a new journey with like-minded people by your side.

It’s also possible that what happens on or near the 11th restores your faith in life and humanity. You have experienced the taskmaster of the heavens Saturn in your sign of Sagittarius for the last two years but finally things are beginning to shift.

One problem or burden might not have gone away but you have more people on your side and you can see things differently. New ideas, a fresh perspective may be all that it takes to bring something new to the situation and this can help unlock the puzzle.

There is a second eclipse in February and this takes place on the 26th down at the base of your chart in the sign of Pisces. The Sun enters watery Pisces on the 18th and is joined by communication planet Mercury on the 25th, the day before the eclipse.

What’s important about this Solar or New Moon eclipse is that it’s the last in a cycle which began in March 2015. The signs involved are Virgo and Pisces, your future and where you’re heading, your past and where you’re from. Virgo rules your career and vocation and Pisces your home and family.

It’s these areas of your life that have been shifting and changing over the last couple of years and this is the final wave. Neptune sits next to the Sun and Moon in Pisces during the eclipse so you may need to surrender in some way, to let things go or let things be. There could be some sadness around the eclipse date or a sense that you’re standing on unstable ground.

It’s also a time when your dreams and imagination are in full flow and this is when you can tap into your creative or spiritual source. Here too a fresh perspective on your personal situation and your life will help, finding the gifts hidden within your deeper emotions.