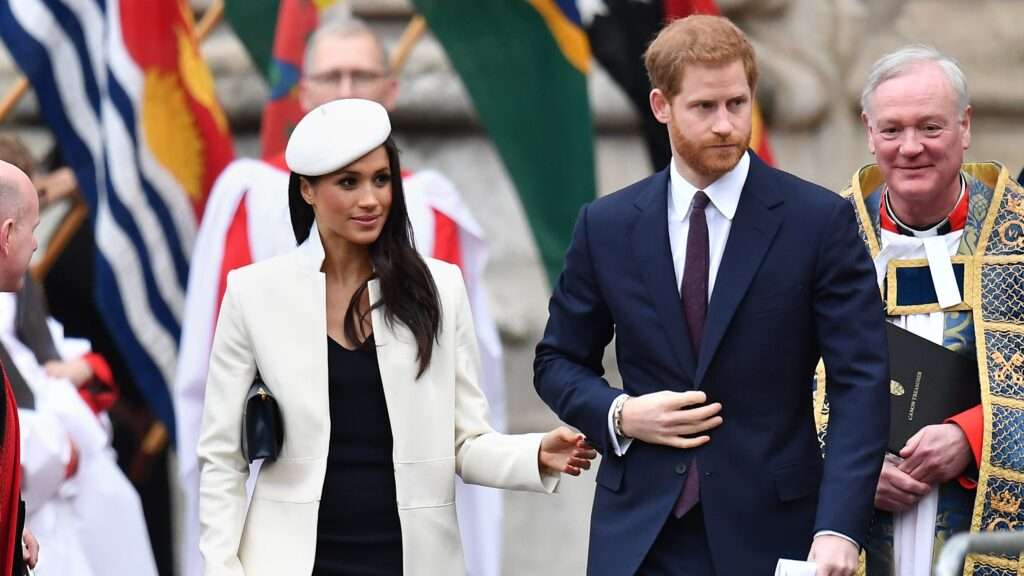 The Royal wedding between Prince Harry and Meghan Markle takes place this Saturday, May 19, 2018 at 12pm. Royal wedding fever is already gripping the tabloids and with regard to Meghan’s family, it’s been a bumpy ride to the big day itself.

This isn’t a huge surprise to astrologers because Harry and Meghan have chosen their wedding date in the same week as some very lively astrology, namely Uranus’ move into Taurus and the Mars-Uranus square. This is extremely significant and it can tell us a lot about what the wedding means and why this is such a pivotal moment in Royal history. 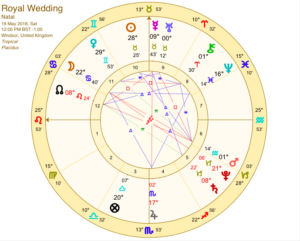 Before revealing more about the Uranus’ factor, it’s worth referring to the astrology chart for the wedding, the exact moment when the wedding ceremony begins (see right).

Event charts are a moment in time, a snapshot of the planets’ positions, which tell a story through the astrology.

On our recent astrology podcast, Christina, the Oxford Astrologer, and I mentioned the fact that Venus, the planet of love, wasn’t well placed in the chart for the wedding because it’s at 29 degrees Gemini and about to change star sign.

Some astrologers writing about the wedding have waxed lyrical about the fact that Venus moves into Cancer, the sign representing home and family, on the day of the wedding. Yes, it does, at exactly 14:11, but too late for the wedding ceremony. Venus in Gemini is light & flirty and often a symbol of two relationships.

Venus in Gemini about to change star signs is not as strong a planetary placing as Venus at 0 degrees Cancer would have been, in the caring, kind and family-oriented star sign. In the wedding chart, Venus in Gemini rules the 3rd house of siblings, and this has been one issue running up to the big day for Meghan.

In an event chart, it’s also important to look at the ruler of the Ascendant and the swift-moving Moon. Fortunately, these are both strongly placed. The Sun is the chart ruler, steady and reliable in Taurus in the 10th house of status. The Moon is at home in its sign of rulership, caring Cancer, so the wedding itself will no doubt be warm and loving and bring people and family together.

Note the Moon’s aspects, as they also tell a story. The Moon’s closest planetary aspect is a difficult one, an opposition to Pluto. This too symbolises the secrets and exploitation of this week’s events in the media.

Thankfully, the Moon is separating from Pluto and its next planetary aspect is strong, a harmonious sextile aspect to the Sun. The Moon and Sun come together, a symbol of marriage in astrology, as the Moon is Queen and the Sun is King. They are united in the wedding chart.

Back to Uranus and the fact that, on May 15, 2018, Uranus changed star sign for the first time in seven years. Uranus represents change and all things modern and we know that this young couple who are exchanging vows are bringing something new to the royal family. Meghan is older than Harry, divorced, mixed-race and has already made her way in the world as a TV celebrity.

This alone shows the world that the times are a’changing. On paper, Meghan might not be the obvious choice for a Royal bride. Yet, the Royal Family and the public have embraced Harry’s choice of partner and Meghan’s Sun Leo ‘royal’ credentials and her charming nature have helped win people over.

In the wedding chart, you also see the separating Mars-Uranus square, which was exact on May 16, 2018. Mars rules the Scorpio IC, the point in the birth chart which represents family. This too seems to be a symbol of Meghan’s messy family situation which has dominated the pages of the media this week.

Note, however, the exact degree of Uranus at the time of the wedding: 0 Taurus 12. This is extraordinary because it’s the exact degree and minute of the Queen’s Sun in Taurus. Considering it takes Uranus eighty-four years to circuit the zodiac, this planetary event is rare. You can’t count out the Queen abdicating under this transit, although you never know, Her Maj might develop a love of hip-hop or start tweeting!

The extra Uranus factor shows that this wedding is not only a loving union but something deeper. It’s the inevitable passing on of the Royal Family. The old ways are coming to an end and, as always in life, the new ways or new protocol begin to press forward, demanding attention.

We’ve already seen that William & Kate, Harry & Meghan make an awesome foursome or the Royal Fab 4 as they’ve been dubbed. They’re going to be out in the world, effecting change, getting involved with mental health projects, championing the Invictus Games, and be pushing for social progress. Meghan will no doubt be keen to continue her campaigning on issues for women and girls.

This Royal Wedding is the start of the new beginnings, which is why it’s so powerful that it’s taking place only four days after Uranus’ major shift in the zodiac. Plus, Uranus is triggering the birth charts of two other key individuals in the Royal Family. Prince Charles’ Moon is at 0 Taurus 26, so he shares a cosmic marriage with his mother, the apple of her eye.

Charles’ Moon is in the 10th house ruling his career but, unlike the Queen who has Saturn, the planet of authority, dominant on her Scorpio Midheaven, Charles has no planets atop the Midheaven, the point of prestige in the astrology chart. The person who does, however, is Charles’ son, Prince William, the real heir to the throne.

William has Jupiter, the planet of popularity and new rulership, at 0 Scorpio 20 conjunct his Midheaven at 2 Scorpio 29. This means that in only a few days time, both Charles and William will have exact Uranus transits to significant planets in their astrology, one a conjunction and one an opposition. It’s the end of one era and the beginning of a new era.

Let’s sit back and enjoy the wedding and hope that the family stories which have dominated the wedding week will fade away. There’s much to be adored and cheered for on the wedding day itself as two remarkable young people declare their love for one another.

Then, let’s see what Uranus’ transit at 0 degrees Taurus brings to the Royal Family.

p.s. I just read an article stating that the wedding this Saturday could be in the Top 10 of most expensive weddings ever! That sounds like Uranus in Taurus, the money sign…