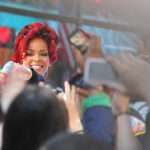 I watched Rihanna on the Jonathan Ross Show on Saturday night. I know she’s  a Pisces and as I listened to her, I had a small wager with myself that she’s currently experiencing her Neptune transit.

‘Transit’ is an astrological term for when a planet in the heavens contacts a planet in your natal or birth chart. The planets are constantly orbiting and moving through the 12 different signs of the zodiac and the outer planets, Uranus, Neptune and Pluto coincide with key events in a person’s life. Neptune moved in to Pisces on 3rd February 2012 and this means that anyone born on 19th/20th/21st/22nd February has a Neptune transit over their Sun in Pisces this year.

Neptune rules the world of illusion and its energy is boundless so Neptune transits stimulate the imagination. Pisces is the artist and Neptune in Pisces pushes back the boundaries of what’s possible for musicians, poets, film-makers, photographers and all creative types. We’re already seeing the emergence of new trends in tune with Neptune in Pisces with the popularity of the virtual pinboard, Pinterest, which “lets you organise and share all the beautiful things you find on the web”.

What struck me listening to Rihanna was how she enjoyed talking about her music as a form of art. This is what she said: “I’ve come to a place where I’ve earned the right to be ok with my artistry. You have to accept  not everyone is going to interpret it the way you do… The message that I’m trying to get over with the visual. A lot of the time the music videos are banned, but you can’t let your art suffer for that”.

I checked Rihanna’s birthdate, which is 20 February 1988 so her Sun is at 1 Pisces. I found the following video on YouTube of Rihanna singing “We Found Love” at the Brits 2012 and it’s fantastic for a Neptune transit with the dancers throwing around different coloured tins of paint in a huge glass box creating a work of art live on stage.

It will be interesting to follow Rihanna’s progress over the coming year. Neptune rules romance and she’s a single girl looking for love, plus there’s a metaphysical side to Neptune that often leads you on a new spiritual path. She’ll benefit by staying away from the flip side of Neptune, which is addiction and scandal, but instead fully embrace her spiritual, artistic self and devote herself to becoming a Pisces cosmic girl.

If you would like to book an astrology consultation to discover how the planets are currently influencing your own life and how you can make the most of the potential in your birth chart using astrology, contact me now. I look forward to hearing from you.