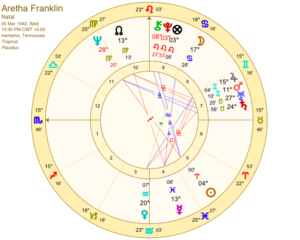 Aretha was born with a Scorpio Ascendant, which means Mars was her planet, ruling both Scorpio and Aries.

Venus may be the planet that rules women but women like Aretha remind us that we need to access our Mars’ energy to be strong women.

This is evident in one of Aretha’s most well- known songs, ‘Respect’, which became a women’s anthem (an anthem for everyone actually, as we all deserve respect) – video below.

Aretha was one of the greatest singers of all time – fact. She sang with soul, shown by the dominance of water (emotions) in her horoscope. The Moon (inner being) in Cancer trine Mercury (voice/words) in Pisces both trine her Scorpio Ascendant (self). The raw emotion poured out of her as she sang and touched us all deeply.

She died on a Jupiter transit exactly conjunct her Ascendant at 15 Scorpio. Jupiter transits often coincide with death, a reminder to celebrate a person’s death because of the life they lived.

Jupiter in Scorpio is about to complete its final trine aspect with Neptune in Pisces this coming weekend. The Neptune transit is in Aretha’s 4th house returning her to the place she came from.

The Jupiter-Neptune theme in water signs symbolises an outpouring of emotion, both sadness and joy. She is accompanied on her journey by a glorious wave of love, compassion and gratitude from all those she moved, with her music and her very being.