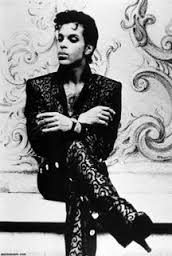 … and another legend passes. Yesterday on Thursday 21st April the sad news emerged that the singer songwriter Prince had died, age 57.

A prolific and talented musician and innovative artist, this diminutive 5′ 2″ superstar will no longer grace us with his presence.

Only yesterday I wrote an article about this week’s astrology climaxing in a powerful Full Moon in Scorpio today, Friday 22nd April.

Look at Prince’s chart below. Could he be anything other than Scorpio Ascendant, the sign rising on the horizon when he was born, the cover on his book, his image, his profile. Sexy, charismatic, looks hot in black.

Pluto, Scorpio’s modern ruler, sits tight next to the Midheaven, the career point in the chart, smouldering and dangerous. Prince was an enigmatic, mysterious individual, completely at home with his sexuality.

His back catalogue of albums is extensive and there’s a nod to the Scorpio theme in The Black Album and Lovesexy, the cover of which depicts Prince in the nude. Some sales outlets covered the latter in a black cover too.

The Gemini influence is strong and obvious in a man who penned some wonderful songs with both his Sun and communication planet Mercury in Gemini, the latter in its sign of dignity.

Two more planets in dignity are Venus and Mars, the female and male planets. Venus in sensual Taurus and Mars in strutting Aries. Both strong, both emphasising his appeal to men and women and his own diverse sexuality.

When Prince passed away, the Full Moon was reaching culmination and at 2 Scorpio 31, it triggers his natal Neptune at 2 Scorpio 20. Neptune rules music and in his chart, it’s in a close trine aspect with the Moon in visionary Pisces, Neptune’s sign, down at the base of the chart, the anchor to his life.

There are rumours of an overdose giving a nod to Neptune’s link to drugs but Prince’s legacy will live on. Through his music he will continue to be a muse, an inspiration to many and his captivating presence and inimitable talent will be sorely missed.

When he was a child, allegedly Prince said to his mother, ‘Mom, I’m not going to be sick anymore’ and she said ‘Why?’ He replied, ‘Because an angel told me so’.

Tears will be shed and doves will cry but the music will play on as he hangs out with David Bowie and they wow the angels together with their songs and unique individuality. 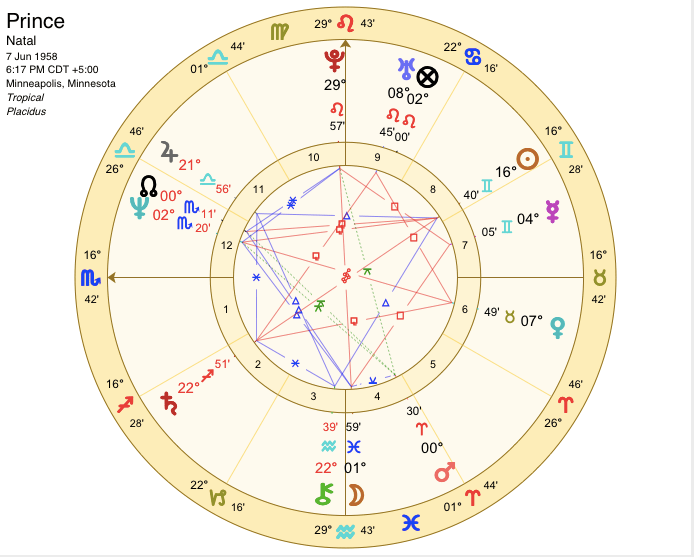