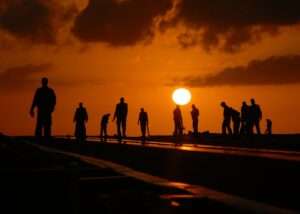 Your traditional ruling planet Jupiter is involved in some major astrology over the next few months so this suggests you have an opportunity to say Yes to some big developments in your own life.

Last month in August, Jupiter entered your opposite sign of Virgo and this highlights the sector of your chart that rules relationships, both personal and professional, and all your 1-to-1 negotiations. Jupiter remains here until September 2016 so this is going to be a buoyant and abundant time for love and relationships in general.

This month is not so clear cut however because Jupiter’s main planetary aspect is an opposition to your modern ruling planet Neptune in your sign of Pisces. This takes place on the 17th and this is quite remarkable for you having your two ruling planets opposite each other across the heavens.

On a basic level, this might mean that you have conflicting needs. Part of you is drawn towards a key relationship in your life and part of you wants to look after yourself and your own needs. You might be feeling wistful about love or yearning for a soul-mate connection. You might be lost in the throes of romance which feels unsettling at times as if you’ve lost your anchor and your feet aren’t on solid ground.

Certainly this opposition will throw up a period of questioning. What do you want and why? Are you in the right relationship? Do you understand your other half? Are you in love with love?

This might be your partner who changes their mind or is unsure about their own feelings. Something a partner says might worry you or be a cause for concern. This can apply to both a romantic relationship or a business partnership. Either way, you probably have to play a waiting game and it’s never the time to make major decisions when Mercury’s in retreat.

Take note of what happens on the 13th when there’s a solar eclipse in your opposite sign of Virgo. Eclipses can be dramatic but also important turning points and this one falls in your relationship sector. This is not necessarily a bad or difficult time but it could be that whatever’s happening in your own life feels new, unexplored territory and you’re wise to move slowly and proceed one step at a time.

Another possibility is the fact that both Jupiter and Neptune are planets linked to compassion and you might find you have a burning desire to help others or follow a vocation that taps into your caring nature. Again it’s best not to drop everything and run off after a good cause but do consider this as an option. Life’s calling you forth and other people are about to play a significant role in your own life and you in theirs.

There’s another important marker this month which is Saturn, the taskmaster of the heavens, re-entering Sagittarius and your career sector on the 18th. Saturn was in this part of your chart from late December 2014 until mid-June 2015 so think back to that period in your life to help you uncover what Saturn means for you in your work, career and vocation sector.

Saturn is the get real planet and sometimes it can indicate a time of hard work or period of unemployment. However, it’s also the planet of commitment, duty and responsibility and with Saturn in Sagittarius until the end of 2017, you might be starting a new job or work position that requires you to move up a level and to take on a new more distinguished role.

Either way, Saturn in your career sector is rarely a breeze so be prepared to knuckle down and work hard. You can’t wing it with Saturn in this part of your chart and if you want to reap your rewards, you must think long-term.

Saturn’s entry into this part of your chart could combine with the Jupiter-Neptune opposition to symbolise a shift in your own priorities, a change of vocation, a desire to do something different, to follow your deeper purpose. If so, this month you’re in process and by mid-October you’ll be more clear about the way ahead.

This is the bigger picture but on an everyday level, things are moving along quite nicely. At the beginning of the month on the 1st, the lovers of the heavens, Venus and Mars, unite in Leo and the sector of your chart that rules your everyday work and routine, your lifestyle and health. Look out for other people who can help and support you now.

This is a positive symbol for teamwork and creating new alliances. Then five days later on the 6th, Venus turns direct in Leo after a six week period when she was retrograde or on go slow. If you’ve been struggling with someone you work with, if work’s been quiet or you’ve slipped with healthy habits, Venus turning direct is a significant turning point. You can get back on track with your work and with habits and routines that support your health.

Plus, there’s promise of money coming in as both Mars and Venus align with clever Uranus in Aries and your money sector on the 8th and 23rd. This promises luck, a surprise bonus and the chance to make money quickly online or through other peoples’ advice. Listen out for opportunities that come your way.

However, where money’s concerned it’s important to sort things out sooner rather than later. Mercury, the communication planet, is in Libra and your joint finance sector throughout September. In the first half of the month, get on top of money matters and don’t avoid dealing with any financial arrangement that’s not working for you. It’s a good time to get advice, sort out your outgoings and expenses and to be cash savvy.

Once Mercury turns retrograde in Libra on the 17th, then it’s a different story and you might have to play a waiting game when it comes to money, contracts or other peoples’ approval. In addition, the lunar eclipse on the 28th cuts across the Aries/Libra axis of your chart highlighting money matters.

Eclipses are shadowy and bring what’s hidden to light. Another indication that it’s best to be honest about cash and upfront, plus ensure that your money’s safe and secure before mid-September. Once Mercury turns direct on October 9th, you have a green light with regard to money, cash and finances.