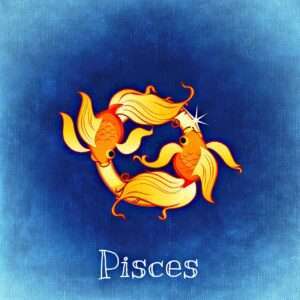 As April begins, Venus, the planet which rules love and money, is in your sign of Pisces.

Venus loves to be in Pisces as this is a romantic placing. Venus loves the good things in life and Pisces is a boundless quality.

Put the two together and you can float away on a wave of ecstasy and bliss.

However you tap into this inspirational realm is up to you but love, poetry, music, art and spirituality are positive ways you can transcend the mundane and live life at a higher level.

Venus remains in your sign until the 5th but that’s not to say this is your only opportunity for love and happiness. Your ruling planet Jupiter continues its journey through your opposite sign of Virgo and your relationship sector, although Jupiter is currently retrograde or on go slow. Next month brings the wow factor for love when Jupiter switches direction.

Jupiter’s also in action this month and the period from the 12th to the 15th looks heartening for love and relationships and this a positive period to talk to the one you love, open up lines of communication or ask someone out on a date. If you want more security in a relationship or you want to line up new activities for yourself and your partner, work at commitment and you create a strong foundation between you.

Mercury is your partner planet and from the 5th onwards, Mercury is in your communication sector. This isn’t a month to avoid the big conversations whether you’re making a proposal or you’re ready to move on. One way or another, you need and want to know where you stand and you have every opportunity to lay down new guidelines or rules which will help you feel more secure.

Don’t avoid talking about the future either and make time to find out what someone close wants. Are you on the same wavelength? Do your plans match? Is there a way to compromise so you can both satisfy your individual needs? The more you put in place this month, the more settled your future over the next few weeks and months.

Relationships are important now especially when it comes to making new commitments or major decisions but there are also other areas of life which are flagged up as important.

Firstly, money matters are high priority as April begins. Both the Sun and communication planet Mercury are in Aries and your personal money sector at the start of the month. In addition, there’s a New Moon in Aries on the 7th, a symbol of new beginnings.

This is a brilliant date to set your intentions and make some key moves which will help your financial situation and bring you prosperity in the month ahead. This New Moon comes on the back of a powerful lunar eclipse which cut across the money axis of your chart on March 23rd.

Any changes or major events during this period should now have settled enough that you know where you stand and you know where change or improvements are needed.

Plus unpredictable Uranus is in action on the 9th and again on the 22nd. Uranus remains in your personal money sector as it’s a slow moving planet and it brings both highs and lows. If you’re willing to take a risk, you can win big when Uranus is in action. However, don’t speculate if you can’t afford to lose.

The energy from the 7th-9th feels alive and this is a good period to take a risk or initiate a new money-making venture. Use the internet to your advantage and trust your intuition when it comes to money, spending and saving. Look out for a new innovative way of earning money, something that’s trending. Going down the tried and trusted path is more reliable but it won’t bring you the overnight big wins.

Career matters too dominate in the month ahead and there are two main reasons for this. Firstly, the taskmaster of the heavens, Saturn, is in Sagittarius and your career sector so this is where your learning lies. You have to think commitment and long-term gain when Saturn is in play and you often have to work hard to reap your rewards.

Yet there’s another planet currently in Sagittarius and this is Mars, the planet of action and energy. This is a go-for-it combination and like Uranus in your money sector, it feels impulsive and daring. Be bold when it comes to your working life and be courageous. Aim for promotion, set up a new business, do something exciting and adventurous.

Yet whatever you’re up to on the work front, act fast. Come the 17th, Mars turns retrograde and will be on go slow for 10 weeks. Mid-April could bring a turning point when it comes to work and vocation. You find out what’s not working out and you recognise that you have to slow down the pace. Going at breakneck speed won’t cut it and taking too many risks isn’t wise once Mars shifts direction.

So the major activity is in the first half of the month after which it’s wise to consolidate your efforts and ensure that everything is as safe and secure in your life as it can be. When it comes to money, mid-April is not a good time to loan what you have especially if this concerns a friend or a group in which you’re involved.

What you give out, you might not get back in return and in some cases, you will have to cut your losses if you’re to avoid losing out any further. The 18th/19th are the most powerful dates in this regard.

On the 28th, Mercury also turns retrograde so before this date, ensure you back up important data and chase up any urgent correspondence. The Full Moon on the 22nd highlights travel and education and if you want to book a trip away or sign up to a course, this is the date to do so rather than leave it any longer.