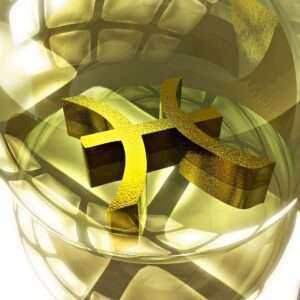 This month’s astrology continues on from last month’s major Jupiter-Neptune square aspect that was exact on January 13th. This is a remarkable connection between these two planets, Pisces’ co-rulers, because they are both in their sign of rulership, Jupiter in Sagittarius and Neptune in Pisces.

Jupiter in Sagittarius highlights your career and vocation, your future path and Neptune in Pisces highlights your identity, your personal life, your aims and goals. This is a boundless combination that encourages you to believe anything is possible and make great strides in the year ahead.

As February begins, however, you could benefit from a quieter way of life or some time to reflect and contemplate on what next. Both talk planet Mercury and the Sun are in Aquarius and the most hidden sector of your horoscope until the 10th and 18th respectively.

Plus, the New Moon on the 4th falls in Aquarius, a symbol of new beginnings and the chance to start a fresh page. This is about your inner life rather than being out in the world, so perhaps you need time out or you’re ready for R&R, rest and relaxation.

Alternatively, it might be that you’re changing on the inside and you have a lot to think about and process. Jupiter connects with both Mercury and the Sun on the 3rd and the 8th and is pulled into the New Moon energy.

Therefore, this is a good week in the month to plan ahead and make some intuitive moves around your career and vocation. Follow up any past connections and don’t leave matters unresolved. Complete what you started.

Money is also a major factor in the first two weeks of the month and this may be why you’re keen to expand your career or a business. Action planet Mars has been in Aries and your personal money sector since the start of the year. In fact, it moved into Aries on New Year’s Day.

Mars is the planet of action and ambition and things can progress quickly when Mars is raring to go. This month, however, there’s added conflict or potential stress around money matters.

This is because Mars clashes with Pluto in Capricorn on the 2nd. This combination is volatile and tempers could flare. You might be angry if money doesn’t materialise or someone refuses to pay back a loan. It also suggests you need to be assertive when it comes to money and not let someone else call the shots.

Fast forward two weeks and Mars is on the verge of leaving Aries on the 14th. Before it does so, it makes a powerful planetary conjunction with Uranus in Aries on the 13th. This is important because Mars and Uranus have been involved in a love affair for some time. They’re working together.

This adds an unpredictable element to your finances and you might be glad to see the back of Uranus from Aries and your money sector. This takes place on March 6th and Uranus won’t return to Aries for another 84 years.

As you’ve had the planet of change and instability in Aries and your personal money sector since 2010/2011, this doesn’t present a settled picture. Uranus can bring wins your way, but it’s rarely steady and stable.

Pay close attention to the Mars/Uranus conjunction on the 13th and try to work out what this might mean for you. It’s an impulsive combination but it doesn’t feel like the best day to take a huge risk financially. Fire sign energy is very different to your go-with-the-flow instinctive Pisces nature.

Instead, you might find that events are dramatic around money or you recognise where you’re ready to move on. You could theoretically make a killing with online shares but only get involved if you know the money industry inside out.

As the month progresses, you may start to feel more confident with yourself and more settled in life in general. Communication planet Mercury enters your star sign Pisces on the 10th and the Sun moves into Pisces on the 18th, the start of your birthday month.

Both events are significant as the focus turns to your personal life and what brings you happiness and fulfilment. In fact, you might be ready to readdress the balance if you’re been too caught up with the bigger picture of life recently. You may find that this year is going to be an all-or-nothing picture when it comes to the work/life balance.

Also, the lovers of the heavens, Venus and Mars, move into steady and stable earth signs in February. Venus is in Capricorn from the 3rd onwards and Mars enters Taurus on the 14th.

These sectors of your horoscope represent friends, old and new. This is about your connections, being part of your community and out in the world. It’s about companionship but also seeking support from your friends and inspiration from your peers.

Venture out into the world and make key connections that can source you and sustain you in the months ahead.

The Full Moon on the 19th is also significant as it cuts across the Virgo/Pisces axis of the zodiac. This could be a key date for your close relationships and more important than Valentines Day, the 14th.

Plus, with romantic Neptune in full flow on the 17th and the 19th, this is the peak period of the month for love. Make the most of it and cosy up to the one you love.