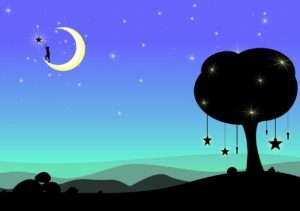 New Moons take place on average once a month and tend to fall in consecutive signs of the zodiac. This month and next we’re stepping outside usual practice as we have not one but two New Moons in the fixed air sign of Aquarius.

Some people have been posting the wrong New Moon sign on the internet but as this is one of the key lunar phases you need to take into account the Moon’s entry into and exit from each sign to know where the New Moon falls. At January’s New Moon, the Moon enters Aquarius 3 hours after the Sun and at February’s New Moon, the Moon leaves Aquarius 3 minutes before the Sun. You can find out this information in a planetary ephemeris, the astrologer’s handbook, which records all the movements of the 10 planets.

New Moons are the start of a new lunar phase and represent new beginnings and the chance to make a fresh start. New Moons symbolise a forward-moving energy that’s perfect for initiating new projects and ideas and sowing seeds which can grow and flourish in time. This is the time of the month to set new intentions, to pick up the phone and start a new conversation, to make things happen.

This is an interesting and unusual New Moon phase because of the two New Moons in the same sign in consecutive months plus squished between them is Mercury, the planet of communication, retrograde and also in Aquarius. In effect, this means that the ideas which are bubbling away right now may have to be reworked in some shape or form before they get the go-ahead. You need to be patient or you’re waiting for someone else whose decision underpins your own.

Look Out For A Second Chance

It’s worth noting that Mercury turns direct on February 11th 2015 at 1 Aquarius 18, i.e. very close to January’s New Moon degree so the two are linked. Mercury’s change to direct motion is the equivalent of a green light and brings the theme of second chances, which again is emphasised by two New Moons in the same sign.

Plus of course it’s hard to miss the fact that this unusual New Moon pattern falls in the sign of Aquarius, the zodiac’s rebel who’s a non-conformist by heart. Aquarius rules groups, technology, alternative practices and is a call to stand out from the crowd whilst gathering like-minded people around you.

This may sound incompatible advice and yet that’s the joy of Aquarius, an individual and freedom-loving sign whose goals and desires link in to the greater good. Aquarius knows instinctively that community and collaborative ventures can further progress and create change swiftly. Here’s an article I wrote last year entitled All You Need To Know About The Sign of Aquarius if you wish to delve further into this intriguing sign.

What Does It Mean For You?

Knowing where Aquarius is in your chart will help you decide what this means for you and which area of your life is ripe for change. In the following list, read your Sun Sign and your Ascendant for the complete picture:

Remember that timing is the key to make the full potential of these two back-to-back New Moons in Aquarius. What you set in place now boosts into turbo rocket mode in one month’s time. Plus as Aquarius is one of the air signs, this stimulates the power of thinking, magical & logical, and your social connections both on- and off-line.

[On a personal note, my daughter is currently deciding on her GCSE’s to take at school. The synchronicity of this is lovely as we have recently received the booklet with all the options and it’s been the major discussion amongst her friends and ourselves.

Yet, there’s nothing that needs to be decided right now and the next phase kicks in on February 12th 2015 when there’s an options evening to discuss this further, the day after Mercury turns direct (perfect timing!).

We then hand in our final option choices early March. So whilst Mercury’s retrograde, it’s time to mull over the options, try out different ideas and nothing needs to be definite. The actual deadline date coincides with Mercury’s exit from its shadow phase for those of you who pay attention to the longer Mercury cycle. It’s all spookily synchronous with Mercury’s retrograde motion and Mercury rules education.]