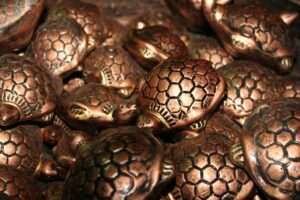 The next round of Mercury retrograde begins on Thursday 28th April and lasts until Sunday 22nd May.

Mercury is the trickster planet, the messenger and rules all forms of communication.

Approximately three times a year for three weeks at a time, Mercury retreats through the zodiac and this often coincides with communication chaos, technical glitches, misunderstandings and delays.

It is not advised to buy technology or transport when Mercury’s on go slow because things are more likely to go wrong with it (one car that had to be bought during a past Mercury retrograde phase – a long story why! – has cost us a fortune).

There are many examples too of projects launched which haven’t gone smoothly and often you have to start over, begin again in some way, once Mercury turns direct. So for now, hold your horses and delay the big decisions where possible.

However, this is not a reason to do nothing and there are many ways you can use the Mercury retrograde phase to good effect. These often include the re-words, e.g.:

I often think of Mercury retrograde as a time when you benefit from walking backwards or in other words, you look at life from a different angle, a fresh perspective. It’s a powerful time of inner growth and learning rather than out-and-out action. You can learn from your mistakes too.

Plus each Mercury retrograde phase is different depending which sign it takes place in, which important aspects it makes. This time around, Mercury is in the languorous earth sign Taurus so this confirms that ‘doing slow’ is the appropriate pace. There’s nothing fast about the sign of Taurus. This is the planetary equivalent of the tortoise, slow and steady, plodding onwards.

Taurus rules food, productivity, money, practical things, fertility & growth, the earth mother of the zodiac. It’s these areas in particular where you might be reviewing your own situation, where there might be delays and you have to play a waiting game.

One immediate symbol that leaps to mind is my little seedlings that were recently planted out in the garden and this week in the UK we’re having unseasonably chilly weather, including ground frost. It will be a wait-and-see game over the next few weeks to find out whether they survive or whether I need to rethink our veggie garden food options. I expect the latter.

Over the next few weeks, this is a sound time to go back to the basics, to focus on the essentials, to look at what grounds you, what helps you feel secure both financially and emotionally.

In feng shui, the tortoise is one of the celestial creatures linked with longevity and staying power. You feel relaxed when you’re supported and protected and you can draw in good fortune. Look after your health now, get more sleep, rest, eat well, review your financial situation, your income opportunities, walk, get out in nature, move away from your desk.

Focus on building strong foundations so when first Mercury is back up to speed (May 22nd) followed by action planet Mars changing to direct motion (June 29th), you feel rejuvenated, refreshed and you’re in a strong position to move ahead with confidence.

This particular Mercury retrograde phase feels special because as Mercury retreats through the zodiac, it begins to make a triangle shape in the zodiac with two other important planets in earth signs, Jupiter in Virgo and Pluto in Capricorn. This creates a Grand Earth Trine in the heavens, a symbol of fertility, a chance to manifest practical and material goals.

Jupiter is the big planet, symbolising expansion, opportunity and growth, King of the Gods; Pluto is the planet of loss but also transformation, God of the Underworld, a symbol of power which can be used to good or bad effect. Together they represent hidden riches, big power – use it wisely.

This Grand Trine is already in play because Pluto remains at 17 Capricorn throughout May and Mercury turned retrograde at 23 Taurus. It will become most fertile and productive when Mercury moves closer by trine aspect to Jupiter at 13 Capricorn and May 9th could be especially fortunate when Jupiter turns direct in the heavens. (Plus there’s a rare Mercury transit on the same day which I’ll write about in a separate article). Mercury turns direct at 14 Taurus on May 22nd.

So what are you working on now? What are you building towards? Where are you channelling your trust and faith (Jupiter), where are you getting ready in life to wield your power (Pluto)? Where or what do you want to grow, increase, develop, nurture in your life?

Remember, there’s no rush. The planets are in a holding pattern right now and you’re playing a waiting game. Yes, this might prove frustrating at times, you might feel as if you’re taking one step forward and two steps back. If you can relax, rest, slow down the pace, make it happen.

Astrology teaches you that good luck is good timing and once Mercury turns direct in three weeks time, your red light will turn to green. Like the celestial tortoise you can continue your journey in a steady, productive fashion.

Until then, here’s an Irish proverb that seems to fit perfectly the Taurus theme, this go slow period in the heavens: