We bought some new lights for the Christmas tree this weekend. They were fancy schmancy ones with 1 button that had 8 settings. As manufacturing doesn’t seem to be what it was in ye olden days, I guess the 8 settings/1 button combination should have been a warning.

We could get fade in-fade out, slow twinkle & other combinations inbetween including one very panic-inducing continual fast flashing but would the button stop at the steady option?! No! In the end we pushed the button so many times we broke it. The lights flashed either blue/green or orange/red or… nothing.

It didn’t escape my notice that ending up with a tree with malfunctioning lights was perfect timing for Mercury’s next retrograde phase which begins today, Monday 19th December. Mercury is the planet of communication and when the trickster planet is on go slow for three weeks three times a year, technology and things that usually function normally can let you down.

Unless you’ve been living on another planet for the last few weeks, you will also be acutely aware that Christmas is now less than one week away which means that Mercury is retrograde over the Christmas and New Year period.

As I’ve been telling my weekly subscribers for some time, it’s best to get as much Xmas preparation done as you can before Mercury starts its retreat through the zodiac which is today.

So no fair warning in this article and as Mercury rules trade, you might have some extra wheeling & dealing to negotiate if you haven’t yet bought any presents. Yet there are two key factors to note which could be helpful.

Be a Canny Traveller

Firstly, Mercury retrograde often coincides with travel disruption as Mercury rules transport and Christmas is a notoriously tricky time of year to travel. In the UK alone, we’ve already had delays with fog, news of rail strikes and news of some airline strikes worldwide.

So if you’re making any big trips over the next fortnight, double check travel documentation, allow yourself plenty of time to get from A to B, be flexible, be willing to take a diversion when necessary and most importantly, keep your sense of humour handy at all times. That, and ensure you have a good book for any extended layovers.

Secondly, Mercury retrograde is brilliant for switching off, doing less not more, kicking back, changing your everyday routine so you get a chance to look at life differently & gain a fresh perspective on your situation. This is an ideal time of year for contemplation, review, reassessment and if you know anything about Mercury retrograde, you’ll know that the re-words are an important part of the Mercury retrograde picture.

Plus Mercury turns retrograde in Capricorn, the sign linked to work and ambition. You could be landed with the Christmas shift at work, you may be affected by end of year redundancies (commiserations) or end of year promotions (congratulations).

Either way this Mercury retrograde is perfect for everyone to look at the year past. It’s a good time to assess your achievements or failures in 2016, to take some time out so you can tap into your creative juices to come up with new plans ready to put into practice mid-January.

The period between Christmas and New Year is looking especially good for creative projects, mind-mapping and using visualisation tools, art, music, poetry to inspire you. Mercury retreats back to meet the Sun in Capricorn on December 28th and the following day, December 29th, there’s a New Moon in Capricorn.

This is gearing up to be a powerful couple of days to launch those new ideas into the stratosphere, although wait to implement them practically until mid-January. Here’s the all-important data:

Mercury retrograde can be billed as a doom and gloom period and for some, it seems to play out trickier than for others. Yet there are ways to use the Mercury retrograde phase to good effect. Christmas is an ideal time to reconnect with your past and New Year is a classic time to review your past. 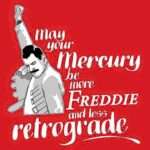 If life has other plans for you than you originally laid out over the festive holiday season, show willing and go with the new schedule. Mercury retrograde can also be a lesson in acceptance that no matter how hard you try, you can’t control everything.

I’ll leave you with one of my all-time favourite Mercury retrograde quotes, ‘May your Mercury be more Freddie and less Retrograde’.