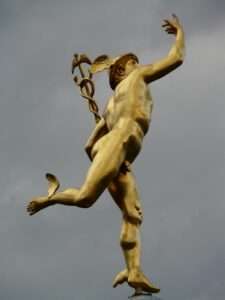 In mythology, Mercury is the fleet-footed messenger whizzing round the universe at top speed passing on messages between the Gods and accompanying the mortals on their travels.

In astrology, the planet Mercury is linked with all forms of communication, technology and transport and when Mercury is up to it’s tricks, i.e. giving the illusion of moving backwards through the heavens, communication can seem more chaotic than usual.

Mercury retrograde has become a worldwide phenomenon and possibly the most renowned astrological occurrence, whether you’re an astrologer or not.

Three times a year for three weeks at a time, this flighty planet gets us all in a flap as phones, planes and automobiles seem to take leave of their senses and communication companies tremble in their establishment boots.

Yet Mercury retrograde has a useful function, to slow us down, to stop us hurtling through life at breakneck speed intent on reaching the next goal or dashing to the next destination without a glance either side all breathless and rushed.

Mercury retrograde is the pause in the breath, the silence amidst the noise, the chance to stop and think and to reflect. It’s a period that’s best spent waiting, being patient, mulling over the next steps.

Then when Mercury turns again, the lights flick back on, what was hidden emerges from the middle of the muddle, decisions can be made and clarity is restored. That moment is now as on Saturday 25th October 2014 at 20:17 BST Mercury turns direct after being on go slow since October 4th.

You may well breathe a sigh of relief but as you do so look out for new information that answers your questions and listen up. Mercury’s the messenger and when Mercury turns direct more times than not he has a message for you.