Update: As per usual, I’m writing post-tournament to reflect on the astrology. This wasn’t my best prediction as Stan ‘The Man’ Wawrinka won and I hadn’t even clocked that he had some decent astrology. For those of you who would like to check out his chart, his birth data is as follows: b. March 28 1985, 11:05 am, Lausanne, Switzerland. His best transit was Saturn at 10 Sagittarius almost exactly sextile his natal Jupiter at 10 Aquarius on the day of the final. Jupiter rules his Pisces Midheaven, so is linked to  his career. Saturn by positive aspect to his career ruler consolidates his reputation; he’s played in only 3 Grand Slam finals but has won all of them, beating the no. 1 seed each time. Impressive! Plus Stan is a Sun Aries and a few of the players were boosted by helpful transits from the ‘athlete’ planet Mars strong in Sagittarius during the tournament. In my monthly newsletter, I mentioned that Mars Sagittarius would be helpful for Aries & Scorpios (ruled by Mars) and Sun Sagittarius.

On a personal note, my heart wasn’t in this prediction and I didn’t really have a personal favourite I wanted to win. Mercury is currently retrograde in Virgo and one of the work sectors of my chart, plus the Solar Eclipse on September 1st was conjunct my natal Pluto in Virgo also in my work sector, so there’s the symbolism for a ‘wrong’ prediction. I began writing these predictions when Roger Federer won Wimbledon in 2012 with textbook astrology, lucky Jupiter exactly conjunct his Midheaven. I am pondering whether to stop writing the tennis predictions when Roger stops playing Grand Slams. Either that or I might change the format next year to a closed Facebook group or similar. Certainly it feels as if it’s time for a change but I’ll give myself the winter to mull things over.

Thank you to all of you who continue to support these tennis/astrology articles, it really is a pleasure and to the critics, one word of advice, it’s easier for feedback to be received if you at first make a positive acknowledgement, even if it’s to say ‘well done for trying’. I’m going to become an advocate for Jupiter in Libra over the coming year, just like the majority of tennis players who play fairly and congratulate one another on their achievements.  ‘If life is a game, let’s play nicely’.

I’m starting my 2016 US Open tennis predictions with a mini boast about my prediction for the Olympics (see tweet above). At the start of the Olympics my hunch was that Andy Murray would defend the Olympic title he won in London 2012. He certainly did so here’s hoping my winning ways continue with the predictions for the US Open in Flushing Meadows, New York which starts on August 29th 2016.

Chart for the Tournament

The chart for the tournament is shown below for those of you who know your astrology. The Moon in Leo is strong conjunct a Leo Midheaven, the success point in the chart. The Moon makes three positive trine aspects to Saturn Sagittarius, Mars Sagittarius and Uranus Aries. Traditionally when the Moon does well, the favourite does well.

There are a host of planets in Virgo as the tournament begins and interesting astrology throughout the fortnight. Most importantly, communication planet Mercury turns retrograde at 29 Virgo 05 on August 30th and this isn’t always good news for Mercury-ruled signs, Gemini and Virgo. Mercury is the planet most closely linked to tennis. There’s a solar eclipse at 9 Virgo 21 on September 1st and eclipses often coincide with dramatic events. Also worth noting, success planet Jupiter enters Libra on September 9th. Jupiter spends approximately one year in each sign of the zodiac so the emphasis shifts from Virgo to Libra throughout the tournament.

There will be no Roger Federer at this Grand Slam as he’s in rehab following his knee injury. Astrologically, he still has Saturn square his Ascendant, a placing which can coincide with injury. The aspect is exact on September 22nd 2016 and will then slowly begin to move away. He’s right to take the rest of the year out if he can.

Djokovic has had a year of extremes. His win at the French Open 2016 secured his place in the history books as he held all four Grand Slams at one time. In Wimbledon he was knocked out in the 3rd round by Sam Querrey and ended his Olympic quest in tears when del Potro beat him in the first round.

The major astrological factor for Djokovic has been Pluto conjunct his Ascendant throughout the year. It’s a slow-moving planet so takes its time. Djokovic’ Ascendant is 16 Capricorn and Pluto is currently retrograde at 15 Capricorn. When you have Pluto conjunct the Ascendant, it’s a time of transformation but not down the easy route. It can be difficult on a personal level. Here’s what Djokovic has now said about his unexpected Wimbledon defeat:

I am in a position, like everybody else, like all of you, we all have private issues and things that are more challenges than issues. More things that we have to encounter and overcome in order to evolve as a human being. That (Wimbledon) was a period for me. It happened right here. It was resolved and life is going on like everything else. It was some other injury I was going through privately and nothing linked to the wrist injury. Everything is fine. Life is going on.

This confirms the Pluto transit and that Djokovic was experiencing testing private and personal issues earlier in the year. It doesn’t sound as if his wrist injury is completely better either so not the best preparation for another Grand Slam win.

Djokovic does have Mars, the athletic planet, on his side as Mars in Sagittarius picks up his fiery natal Jupiter-Saturn trine aspect, exact the weekend of the final.

Andy Murray is playing his best tennis ever. He’s got to the finals of his last 7 tournaments and he won at both Wimbledon and the Olympics. The north node, the point of destiny, was exactly conjunct his Ascendant at 14 Virgo on August 5th, the day the Olympics began. The host of Virgo planets as the US Open begins can only boost his performance.

Murray is peaking at the age of 29, an important year in astrology as this also heralds the Saturn Return, the astrological coming of age. Born exactly one week before Djokovic, he too has Jupiter in Aries trine Saturn in Sagittarius, a fiery combination which helps you believe that with hard work anything is possible.

On the day of the final, Mars at 20 Sagittarius lights up Murray’s natal Moon/Saturn conjunction and triggers his natal Jupiter/Saturn trine. Murray knows how to win and as long as he repeats what he’s learned previously, his astrology looks strong. That’s the beauty of the Jupiter/Saturn trine.

Action planet Mars at 12 Sagittarius is almost exactly opposite Nadal’s Sun Gemini as the tournament begins. Let’s hope this gives him a much-needed athletic boost and that it takes away from the difficulties he’s experienced with Saturn in his 1st house ruling the physical body and opposing his Sun which rules vitality. Saturn by opposition invariably slows you down and Nadal too comes into this US Open hoping a niggling wrist injury is fully recovered.

Nadal led Spain to victory as he won the men’s doubles at the Olympics earlier this year but he hasn’t reached the semi-final stage of a Grand Slam since winning the French Open in 2014.

There is no time of birth for del Potro and it would be very helpful to know right now. This is because his Sun is at 0 Libra and lucky planet Jupiter will be conjunct his Sun the day of the final, September 11th 2016. This planetary event happens once every 12 years so it’s a strong indicator of success.

Del Potro won the US Open title in 2009 beating Federer in the final to clinch victory. He’s back on form this year after being thwarted by injury over the last years. He not only played a sensational final against Andy Murray at the Olympics but was the one to knock out Djokovic in the first round. He had to get a wild card to even compete at the US Open but he’s definitely one to watch.

Cilic beat Andy Murray at Cincinnati in the run up to the US Open and he also triumphed at the US Open two years ago. He currently has Jupiter boosting his 1st house as his Ascendant is 24 Virgo 49 and Jupiter was exactly at this point on August 15th 2016, the day after the Cincinnati tournament began. His Sun is at 5 Libra 15 so Jupiter’s heading steadily towards it and will be exact on October 3rd 2016.

Thiem’s Sun is at 10 Virgo 29 so the eclipse on September 1st falls close to this point in his chart. His natal Venus is at 7 Leo 31, very close to the Midheaven of the tournament chart. On the day of the final, Venus is conjunct his natal Jupiter at 15 Libra. Not major astrology but Venus is one of the benefics, i.e. positive planets and the eclipse will either act as a boost or a downfall.

Your Jupiter Return takes place once every 12 years when success planet Jupiter returns to the place it was in the zodiac when you were born. Tomic’s Jupiter is at 2 Libra 16. The Return isn’t exact during the tournament but will be on September 22nd 2016.

Jack Sock has two important Jupiter transits taking place. His natal Jupiter is 26 Virgo 27, so he’s just finishing his second Jupiter Return (exact August 23rd 2016). Plus another Libra with his Sun at 1 Libra 12 so success planet Jupiter is heading for his Sun as well. This is likely to be a peak period for him.

Zverev is often cited as one of the younger players to note. A Sun Taurus, his north node, the destiny point, is at 27 Virgo 16 so Jupiter is very close to this point in his chart as the tournament begins. Because of no birth time, you can’t know for sure the degree of his natal Moon but it’s likely to be late degrees Virgo/early degrees Libra, so again may be boosted by Jupiter.

With his Sun at 27 Virgo 20, Lopez has Jupiter lighting up his Sun as the tournament begins.

With his Sun at 13 Libra, Querrey also has action planet Mars at 29 Virgo. The triple stellium of Jupiter, Mercury & Venus in the tournament chart picks up his natal Mars although this is the exact degree at which Mercury turns retrograde on August 30th. [Update: Querrey lost in the 1st round on the day Mercury turned retrograde].

A Sun Scorpio, Coric’ natal Mars is at 8 Virgo 11 so the solar eclipse on September 1st lands on it. This will be interesting to see whether he crashes out or peaks at the right time. Eclipses are linked to dramatic events. [Update: Coric retired in the 1st round].

Batista Agut’s Sun is at 24 Aries 40 and planet of surprises, Uranus, turned retrograde at this point in the heavens on July 29th 2016. As the tournament begins, Uranus is at 24 Aries 08, still in close conjunction to Agut’s Sun Aries. This adds the X Factor so watch out for surprises.

I’m having a flutter on Del Potro, you can’t count out no. 1 seed Djokovic but I’m going for Andy Murray to win as the no. 2 favourite. 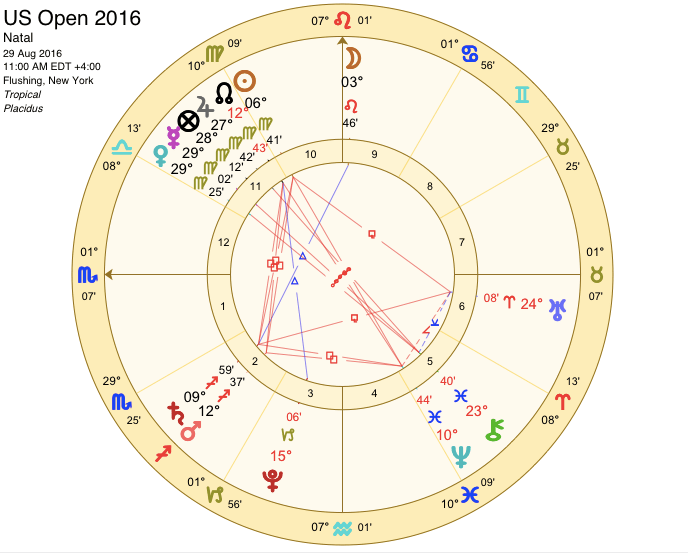