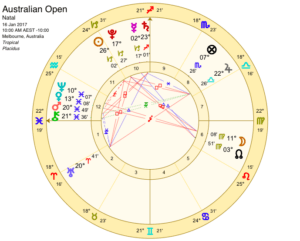 What an amazing tournament! Sometimes the simplest astrology is the best. Saturn conjunct the Midheaven of the tournament chart suggested an experienced player to win. Saturn’s the ‘older’ planet and in the end, two 35 year olds held aloft the trophies – Serena Williams in the women’s and Roger Federer in the men’s.

My prediction for Andy Murray to win was wide of the mark but there was some fascinating astrology which unfolded as the tournament progressed. I’ve added more to the article in bold type below. See you all again at the French Open and thank you for all your comments making this such a fun and interesting tennis/astrology forum.

What a difference an hour makes! I didn’t have a lot of time to look at the astrology for the Australian Open 2017 as January is one of my busiest months work-wise.

I first posted a chart for the start of the tournament on January 16 2017 which was one hour out. The new chart with the correct start time (see left) makes a whole lot more sense. Here’s my update on the astrology for the tournament and the players’ astrology.

The tournament chart is a moment in time which is interpreted symbolically to see if the astrology at the start of the tournament can tell us more about what to expect over the next two weeks.

The chart Ascendant, the sign that’s rising on the horizon, is Pisces which means the traditional ruler is Jupiter in Libra. What’s interesting about Jupiter right now is that it’s caught up in a dynamic planetary pattern that’s ground-breaking positive energy. Jupiter opposes Uranus, on its own an enthusiastic, freedom-loving, impulsive combination but both planets make positive aspects to Saturn. This harnesses the wild energy producing something special.

This lucky combination of Jupiter/Uranus/Saturn which dominated at the end of December 2016 remains in aspect throughout January and Saturn is conjunct the tournament chart’s Sagittarius Midheaven. So any player with key planets/angles tapping into this ‘break through’ planetary energy – Jupiter at 22  Libra opposite Uranus at 20 Aries, Saturn at 23 Sagittarius sextile Jupiter & trine Uranus – has the planets on their side.

Note too that the Moon is in efficient Virgo moving towards a trine aspect with Pluto in Capricorn in the 10th house (career/success). Both astrological factors involving the chart ruler Jupiter and the Moon favour a strong tournament and the favourites, more likely than not, doing well.

n.b. the Jupiter/Uranus/Saturn combination is perhaps also about the weather which has already been dubbed the ‘wild card’ of the tournament as the temperatures in Melbourne are currently so erratic.

Sun Taurus. Andy Murray had an amazing 2016. A slow and steady Taurus, he took a long time getting to the top of his game but he finally made the no. 1 spot. Here’s an article I wrote about Andy inspired by his performance: Andy Murray World no. 1: How to be a Taurus Superstar.

2016 was Andy’s Saturn Return, when the planet linked to long-term achievement, returned to the place it was in the zodiac when he was born. As well as his success on the tennis court, he got married, became a father and received a title to his name – pretty impressive all round.

Andy was born under a stunning set of fire trines with five key planets in Aries & Sagittarius so he’s definitely picking up the stunning astrology between Jupiter in Libra, Uranus in Aries & Saturn in Sagittarius. In fact his natal Moon is 21 Sagittarius 43, almost exactly conjunct the Midheaven of the tournament chart. In addition, the Moon at 11 Virgo is close to his own Ascendant at 14 Virgo. His astrology is strong. n.b. he lost to Mischa Zverev who also had amazing astrology tapping into the Jupiter-Saturn-Uranus combination (see below).

Sun Gemini. Novak was born only one week after Andy Murray and in true Gemini style, rose up the rankings quickly. It was the first half of 2016 that was epic for him as he achieved the ‘Nole Slam’ and by winning the 2016 French Open he held all four Grand Slam titles. However, Pluto going back and forth over his Capricorn Ascendant played out as a year of extremes and losing his no. 1 spot to Andy Murray may have caused personal pain (Pluto cnj ASC).

Like Andy, Novak has a stunning trine aspect between Jupiter in Aries and Saturn in Sagittarius and he came out on top at Doha earlier this month beating Andy in the final. Yet with his Jupiter and Saturn at 19 degrees Aries/Sagittarius respectively, his astrology isn’t as strong as Andy’s right now.

Sun Gemini. Rafael’s tennis career has been dogged by injury. Astrologically it’s got to help him that Saturn has now moved out of his 1st house as this seemed to coincide with the more difficult times for him physically. This triggered his own Sun-Saturn opposition, Saturn weakening his physical body (1st house) and vitality (the Sun). He turned 30 last year so it’s going to be a tough call for him to win another Grand Slam, although always possible.

He has the breakthrough planet Uranus now exactly trine his own natal Uranus so expect surprises. In fact his natal Uranus is at 20 Sagittarius 42 and sits close to the Midheaven (success point) of the tournament chart. We have seen this symbolism be successful once before (Wawrinka at the French Open 2015) so it’s a lucky omen for him.

However in his birth chart, Rafa has a Jupiter-Uranus square aspect and Mars is exactly conjunct his natal Jupiter at 20 Pisces. This is a wounded Mars as Chiron, the ‘wounded healer’ asteroid is at the same place in the heavens. Here’s hoping he doesn’t pick up an injury and has to make a sudden exit. Rafa – runner up – what an amazing comeback after injury. I’m not going to so easily dismiss the over 30’s or the injury prone in future predictions. I’m still not convinced by Chiron transits!

Sun Leo. At age 35, Roger enters the Australian Open as no. 17 seed. He missed a good part of the 2016 season due to injury and must surely be considering this tournament as a chance to get back in his stride. Interesting that the Moon at 11 Virgo in the tournament chart is exactly conjunct his Ascendant at 11 Virgo. No doubt, he’s happy to be back.

The Jupiter-Saturn sextile has only just moved away from his own Neptune-Pluto sextile – Neptune 22 Sagittarius, Pluto 21 Libra. These planets are linked to home & family, money & values in his chart. It would be good to see him playing well once again. Champion! Legend! During the tournament it was revealed that Roger had an incredible progression of Mercury (his career planet) exactly conjunct his progressed Jupiter (success planet) within 2′ arc. His 18th Grand Slam victory at the age of 35 after 6 months off the circuit last year. Just remarkable…

Sun Aries. Another player with a stunning fire trine between Mercury and Venus at 17 & 18 Aries respectively trine Uranus at 17 Sagittarius. It’s this combination which has proved successful for Stan when there have been favourable transits. If anything, the current ‘lucky’ combination of Jupiter/Uranus/Saturn is a little wide of the mark by degree.

There is however a New Moon on January 28 2017 at 8 Aquarius 15, the day before the final, and this does fall close to his natal Jupiter at 10 Aquarius 20, the planet which rules his Pisces Midheaven (success point). It’s a good omen if he makes it this far into the tournament. Stan bowed out before the New Moon so it didn’t help him in the end.

Sun Gemini. The right star sign for a tennis player, Dan has beaten some big names in recent times. He’s going to face Marin Cilic in the 2nd round of the Ausopen which will be a tall order.

However, he does have his natal Venus at 21 Aries so the Jupiter-Uranus opposition is blowing it wide open. Plus with his Mars at 24 Pisces it will be his Mars return during the tournament. This takes place approximately once every 2 years and often gives a surge in energy. A terrific tournament for Dan Evans – he knocked out the no. 7 seed, Cilic and the no. 27 seed, Tomic before losing to Tsonga in Round 4.

Sun Gemini. A natal Sun-Uranus opposition in his chart, Richard’s Uranus is at 20 Sagittarius 06 so it picks up the fair wind of Jupiter/Uranus/Saturn. Another contender with Uranus conjunct the Midheaven of the tournament chart.

In addition, his Jupiter is at 21 Pisces 54 conjunct the Ascendant of the tournament chart. So he’s picking up on the dynamic planetary energy as the tournament begins. It’s a similar scenario to Rafa’s astrology – see above.

Sun Libra. Philipp’s Sun is at 22 Libra so he currently has Jupiter directly on it. With no time of birth, it’s hard to tell what the Sun rules in his natal chart but it’s certainly a time when opportunity beckons.

Sun Libra. Sam is another Sun Libra so he has lucky Jupiter in his sign, although with his Sun at 13 Libra, Jupiter is wide of the mark right now. He does however have a lovely natal Jupiter-Uranus trine aspect in his chart with Jupiter at 26 Aries and Uranus at 23 Sagittarius. The current Jupiter/Uranus/Saturn astrology will boost his natal potential.

Sun Leo. Grand Fire trine in his chart with Sun/Mars/Venus at 28/29 Leo trine Jupiter at 29 Aries and Uranus at 22 Sagittarius. Like Rafa, Mischa’s Uranus is conjunct the Midheaven of the tournament chart. That lucky Grand fire trine will be triggered in a good way throughout 2017.

Andy Murray is currently the one to beat and his astrology ties in beautifully to the tournament chart. He has the opportunity to win his first Australian Open. Will he take it?