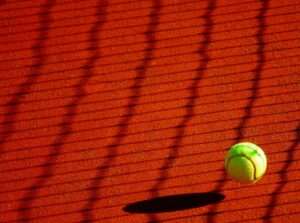 [Update: Sunday 1st February 2015. Djokovic, the no. 1 favourite has won his 5th Australian Open Grand Slam title. The astrology suggested he was the one to watch, both in his natal chart and in the chart that represented the start of the tournament so I’m taking that as a winning prediction.

The astrology was spot on for Federer’s exit and almost to the date (see below) plus Kyrgios was the only non-seed to get to the quarter finals and again the astrology showed that he would have a good tournament. A great tennis Grand Slam & very pleased with the astrology. Looking forward to the rest of the year’s tennis predictions :)]

I am late to the pass this time around to offer an astrological perspective on the mens’ tennis Down Under.

The matches of the Australian Open 2015 are already underway but as I know that many of you are super keen to hear what the astrology predicts for your favourite’s fortunes, I shall do my best to enlighten and entertain.

Here’s what the astrology has to say about the top four (as I’m a Brit, that includes Andy Murray) and the best of the rest.

Roger Federer was the no. 6 seed in last year’s Australian Open but he had an impressive 2014 (as predicted) and even though he didn’t win a Grand Slam, he was runner up at Wimbledon, led the Swiss team to Davis Cup victory and ended the year as the no. 2 seed.

Plus he chalked up his 1000th win of his career when he won at Brisbane earlier this month. Astrologically, Roger had two amazing progressions last year; Sun progressed conjunct Venus (exact October 2014) and Jupiter progressed sextile Mercury (exact April 2014). These slower-moving timing measures influence the whole year and alongside Jupiter’s move into Leo in the middle of 2014, they were symbolic of his amazing progress.

Admittedly Federer has a tough draw in this year’s Australian Open but being a Sun Leo and with his career planet, Mercury, in Leo, the biggest and best planet Jupiter continues to boost his fortunes. Jupiter remains in Leo until August 11th 2015 and the key dates for Federer this year are February 22nd, March 16th, May 2nd & May 24th when Jupiter highlights his natal Sun/Mercury conjunction. The period from March 16th to May 2nd is especially strong as Jupiter turns direct at 12 Leo 35 on April 8th and remains within orb of his dexterous Mercury throughout that time.

The big question mark for Federer in the current tournament is his Mars at 13 Cancer 57. Mars rules stamina and athleticism and the Uranus-Pluto square is currently challenging his Mars. In fact, Pluto is exactly opposite his Mars on January 23rd so during the tournament. Pluto contacting Mars can add super-turbo energy but it is an opposition and Pluto is the wipe-out planet. It’s not astrology that suggests victory and he will have to prove he’s super-human to overcome the astrological odds against him.

In his natal chart, he has a Jupiter-Saturn trine in fire signs, Aries and Sagittarius respectively, and Jupiter currently in Leo is lighting up this impressive combination. Plus Pluto is sextile his Midheaven during the tournament and when he’s on form he is relentless.

The chart of the start of the competition has a Moon/Pluto conjunction in Capricorn in the 10th house and this speaks to me of Djokovic. He has a Capricorn Ascendant and a Scorpio Midheaven with Pluto conjunct the career/success point of the chart. As long as he’s not debilitated by the recent bout of illness, his stars look undeniably strong.

Nadal’s tennis continues to be plagued by injury and he comes into the Australian Open lacking in matches as he suffered a wrist injury and appendicitis in the latter part of 2014. Astrologically Saturn has been Nadal’s downfall and he was off the tennis circuit for some time back in 2012/2013 when Saturn in Scorpio was conjunct his natal Pluto and Ascendant.

Saturn remains in his 1st house ruling the physical body until the end of 2015 when it’s his Saturn Return. Neptune is currently square his natal Saturn in Sagittarius (exact January 19th) which isn’t what you want to see going into a tournament. This transit can expose any vulnerabilities and it effectively weakens Saturn which in tennis terms can represent lack of consistency.

Yet Nadal also has some brilliant astrology right now as his Midheaven, the success point of the chart, is 17 Leo. Jupiter, the planet that symbolises success is going back and forth over his Midheaven between October 2014 and June 2015. Jupiter is exactly conjunct his Midheaven on February 7th, although Jupiter’s in retrograde motion, which isn’t as strong as Jupiter in direct motion.

Nadal has stormed through his 1st match of the Australian Open but it will be interesting to see whether the astrology favours Jupiter or Saturn in his chart.

Andy Murray’s stand out year was 2013 when he won Wimbledon and was named UK’s Sports Personality of the Year. Ongoing back problems meant that he ended that year having surgery and in 2014 he struggled with his form. He’s the no. 6 seed going into the tournament. Astrologically the surgery coincided with his progressed Sun opposite his natal Saturn (the Sun rules the back & Saturn rules the spine). His Wimbledon win was symbolised by an unusual astrological factor: Jupiter exactly conjunct his progressed Midheaven.

His astrology looks livelier for 2015 and he has progressed Mercury sextile his natal Ascendant (exact May 2015). Mercury is a key planet in his chart and the same as Roger Federer, he has a Virgo Ascendant (self) and a Gemini Midheaven (career/success), both Mercury-ruled signs. Mercury is the fleet-footed planet which also rules the hands and is the planet most closely linked to tennis players.

Murray has some helpful astrology during the tournament as Jupiter is trine his natal Saturn and Pluto is trine his Virgo Ascendant. (n.b. he’s always going to have similar astrology to Novak Djokovic as even though Murray is a Sun Taurus and Djokovic is a Sun Gemini, they are born one week apart). Uranus is a key planet in his astrology during  the tournament (Moon progressed conjunct Uranus – January 21st) and later in the year, when Uranus is conjunct his Jupiter Aries (April/November 2015). Uranus is an unpredictable planet and quite hard therefore to determine whether it’s good news or bad news. My guess is that his play will be erratic.

Best of the Rest

Stanislas Wawrinka b. March 28 1985, 11:05 am, Lausanne, Switzerland (no. 4 seed) was the surprise winner of the Australian Open 2014 (I predicted him as a wild card to watch) and he is one of the few ‘best of the rest’ mens’ tennis players for whom there’s a time of birth. Wawrinka is a Sun Aries and he has some lovely fire trines in his chart; Mercury/Venus Aries trine Uranus Sagittarius. Jupiter in Leo creates a Grand Fire Trine with these planets early in February 2015 which is nice astrology but doesn’t shout out that it’s going to be a repeat of 2014.

Kei Nishikori b. December 29 1989 (no. 5 seed) is a Sun Capricorn and he has a stellium of five planets in this hard-working earth sign (possibly six if the Moon’s included). The Moon/Pluto conjunction which symbolises the start of the tournament is at 7 Capricorn conjunct his natal Sun. He could be one to watch.

Tomas Berdych b. September 17 1985 (no. 7 seed) is a Sun Virgo and his best astrology comes later this year when Jupiter is conjunct his Venus at 24 Leo and subsequently moves into Virgo on August 11th 2015 where it remains for the coming year.

Milos Raonic b. December 27 1990 (no. 8 seed) is another Sun Capricorn with a stellium of five planets in the sign of the mountain goat. He has his Jupiter return in April as his natal Jupiter is in the fire sign Leo and that’s a key point in the year for him. It doesn’t impact on his performance in the Australian Open.

David Ferrer b. April 2 1982 (no. 9 seed) is an Aries and his Sun is 12 Aries 20. In the chart that shows the astrology for the start of the tournament, Uranus is at 12 Aries 54 and separating from his natal Sun. Uranus brings surprises but it would be more impressive astrologically if Uranus was applying to his Sun Aries.

Grigor Dimitrov b. May 16 1991 (no. 10 seed) is a Sun Taurus and he has Jupiter in Leo but in the early degrees, 6 Leo 35. His career high of a no. 8 world ranking coincided with Jupiter’s move into Leo in July 2014 when he was a semi-finalist at Wimbledon 2014. The astrology doesn’t leap out for the current tournament.

Nick Kyrgios b. April 27 1995 will be cheered on by the home crowd as he’s a young Australian who’s showed considerable form in 2013 winning the Boys Singles event at the Australian Open and 2014 when  he defeated Rafael Nadal at Wimbledon. He turns 20 in 2015 and although he’s been beset by injury recently, Jupiter is conjunct his natal Mars at 19 Leo during the tournament plus the New Moon on January 20th [0 Aquarius 09] falls on his natal Uranus. That’s lively astrology and if he stays fit, he’ll be playing with enthusiasm and energy.

Astrologer’s favourite: It’s a tough call this time around. I’d go for Novak Djokovic but the chart of the start of the tournament (see below) worries me. The Moon rules the favourite and the Moon runs straight into Pluto in the 10th house ruling success. Will Novak’s flu/sickness bug be a factor in him crashing out or will his resilience kick in? For the first time in my predictions, I’m going to play a wait-and-see game and hope that the astrological interpretations above help you decide for yourself.