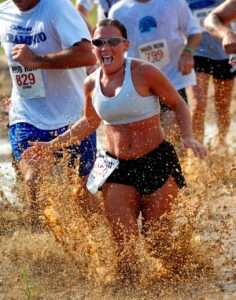 Mars is the action planet linked to speed and forward motion and Mars loves being in any of the three dynamic fire signs: Aries, Leo or Sagittarius.

Mars has been in Sagittarius since September 13th where it remains until October 26th (six weeks in all) but it’s this week that you’re going to see the best of Mars.

This means that Mars, the planet of drive and determination, is triggering the Jupiter-Uranus trine which blazed bright in the skies just over a week ago (September 25th).

This is a wonderful energy as Jupiter and Uranus both represent freedom and space; Jupiter’s the planet of luck and opportunity and Uranus rules change and spontaneity. Together these three planets are urging you forward to take a risk, play big in life and make things happen. It’s lively, it’s loud and it’s out there now…

Last time Mars was in Sagittarius was two years ago and I blogged about a man called Felix Baumgartner, the daredevil skydiver who broke a new world record when he jumped out of a rocket 24 miles high in the sky. Mars in Sagittarius was trine Uranus in Aries back then and there’s the crazy stunt, the thrill and adrenalin rush of a jump that broke the sound barrier.

Now I don’t advocate that you go jumping out of planes/rockets miles and miles high in the sky but I do suggest that you take advantage of this thrill-seeking energy by being bold and courageous, saying Yes to adventure and doing something you’re passionate about. Admittedly, this may make waves with other people in your life as this Grand Trine in the sky links in to Wednesday’s Lunar Eclipse (October 8th) but if there’s something you really, really want to do… here’s your opportunity.

The Race Is On…

And if this wild and crazy planetary energy plays out in a different way and you win the lottery, or your application to go into space is accepted, or you’re invited to join in a charity challenge trekking in the mountains, or you’re nominated as Entrepreneur of the Year, then three cheers for you. The race is on… what will you begin?