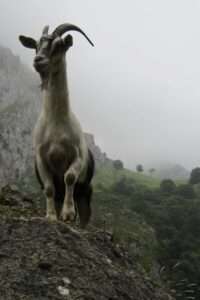 Are you a ram or a goat? Hopefully you’re both or at least, if you can take on elements of both, you can make the most of Mars, the planet of action, in Capricorn, the sign of strategy.

Mars is powerful in Capricorn and it’s a sign that the male planet likes. Mars rules Aries, whose zodiac symbol is the Ram, a male sheep that’s renowned for its large curled horns. During mating season, the ram will fight for dominance and one of the territories it likes to call home is the mountain side.

Capricorn’s zodiac symbol is the mountain goat, tenacious and hardy. They survive in all temperatures on the mountain side and are sure-footed. They are another breed of animal that will fight for dominance.

Mars in Capricorn is the perfect time to channel your inner ram or goat, to plan your strategy for the year ahead and prove your competitive nature. This is the time to decide what mountain you want to climb next. It may be literal, a physical challenge, or it may be an ambitious plan that calls out your leadership qualities. This is your project, no-one else’s and it requires you to be cunning, calculated and committed.

Mars in Capricorn is a fighter but never loses control. In fact, Mars in Capricorn is more likely to defeat his or her opponent by achieving success. Aim for mastery, cool control and be fearless about your objectives. Utilise this male energy that knows how to make things happen and work steadily and persistently to achieve your goals. You know what you want and you work tirelessly towards it.

Do you have your six week project ready to go? Are you ready to grab 2015 by the horns and plan your 12 month strategy? Mars in Capricorn is at the peak of the mountain ready and waiting for you.