I don’t know about you but I’ve been working pretty hard whilst Mars has been in Capricorn since late October; trojan-like, marching soldier discipline, eyes forward, quick march, left, right, left, right.

Working hard is all well and good and I have achieved a lot but boy am I ready for a chance to do things differently, go a little bit wild, be spontaneous, go off on a tangent, think outside of the box.

Are you ready to put down work, break out of your routine and do something different, innovative and off the wall?

The good news is that time is almost here and then some as Mars, the action planet, leaves Capricorn today, Thursday 4th December [23:57 GMT] and enters Aquarius where it remains until January 12th 2015.

Mars in Aquarius is the perfect opportunity to change things around, think play not work, get excited about what’s new, happening or trending, dive into social media and create a storm, change channels, surf the airwaves and let out your inner weird.

It’s OK to be different, in fact it’s brilliant. Diversity and a chance to ring the changes bring genius ideas, devilishly clever schemes and projects ready to show off to the world in 2015.

What a fab (Aquarius word!) time to be gearing up to let go of what’s outdated or boring in your life and sweep in fresh new energy. A change of routine over the holiday season flicks the switch back on and fires up your motivation, your drive and your lust for life.

Help out at a charity, experiment with a non-traditional Christmas, seek out new friends and wherever you are or whatever you’re doing, be proud to stand out from the crowd.

Watch out on December 21st , the day of the Winter Solstice, when Mars teams up in a sexy sextile aspect with Aquarius’ ruling plant Uranus on the same day that Uranus turns direct in the heavens. It’s an electricity overload!

Ever the optimist, I’m looking forward to doing Christmas my way and having some fun with family and friends. Forget normal; Mars in Aquarius is your chance to unleash your inner weird. Namaste! 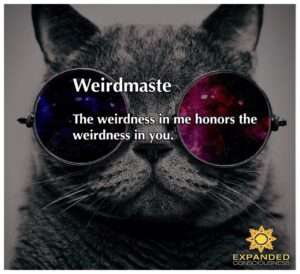 I love this photo from Expanded Consciousness that appeared on my FB timeline today – perfect timing!