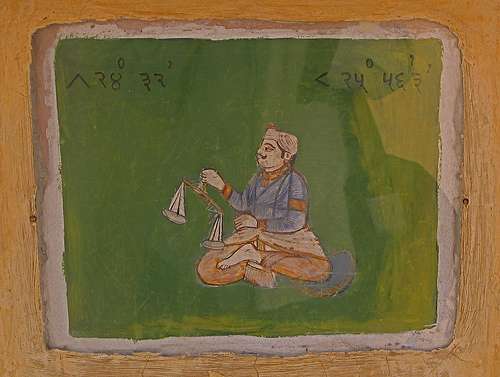 Your planet Venus begins the month in the sign of Capricorn where it’s been since early November 2013 and Capricorn rules your home, your family, your past and where you come from.

Venus has to deal with the more serious side of life in sensible Capricorn, whether you’ve been doing your duty or had more responsibilities than usual over the last few months.

The good news is that Venus leaves Capricorn on the 5th and moves into your fellow air sign of Aquarius so life should start to feel easier, as if a weight has lifted off your shoulders.

This coincides with an important event for you and this is the action planet Mars turning retrograde in your sign of Libra on the 1st and Mars remains on go slow until May 20th 2014. Mars rules anger as well as action and this may be about feeling less frustrated or angry. If life’s easier, then you can let your sociable easy-going personality shine through.

There may be one last blast, however, as Venus squares up to Mars on the 2nd so be aware of this as you and your other half may not see eye-to-eye or there’ll be a falling out within your family. This does feel as if it’s the end of a testing phase for a while at least and you may even feel a sense of relief once Venus is ensconced in Aquarius in the middle of the first week.

Aquarius is the sign that rules all the good things in your life, so the spotlight turns to love affairs, children, entertainment and your creativity. This is the sector of self-expression, enjoying your talents and skills and doing the things in life that you love.

If you’re looking for love or romance, this is one of the best months of the year to meet someone new so don’t waste this opportunity and make things happen. The 18th in particular is a brilliant date to join an online dating agency or to ask someone out on a date.

If you’re in a relationship or married, put the fun back into love if it’s been lacking recently and arrange a few enjoyable dates out. The spotlight’s on pleasure and sharing good times together. At the end of March, Venus is in a much healthier relationship with your partner planet Mars and it may only take a few tweaks to ensure you’re back on track with the one you love.

Having said all of that, it’s quite a complex picture astrologically this month so it does depend on the state of your marriage or current relationship whether you can trundle along together nicely. Mars turning around in the heavens may indicate a change of direction for your other half and s/he may not be as available to you, perhaps because they’re caught up with their own affairs or interests. The Sun’s move into your opposite sign of Aries also suggests that it’s your other half who’s going to take the lead or call the shots with regard to love. With Mars on go slow, it’s best not to force the issue but to let things be if you can and see what emerges in two months time when Mars is back up to speed.

Mars in Libra is an odd combination in that Mars wants to assert him or her self whilst Libra wants to work things out together and for the good of the partnership. It’s a mis-match of astrological symbols so be honest with yourself if you’re coming across as charming and co-operative yet inside you’re seething with anger. The more honest you are with other people if you are feeling frustrated or angry, the less you’ll experience pent up emotions.

Mars retrograde in Libra is also important for you in other ways. If you’ve been implementing your personal goals, working on your fitness levels or being more assertive, you may find that from this month onward, your attention turns inward. This can be a time when you want to pursue personal development or learn some tricks of the trade that help your motivation levels and alter your mindset.

Finally this month, you get the green light for work and career plans. Jupiter, planet of opportunity, is up at the top of your chart in the sign of Cancer ruling these areas of your life and Jupiter’s in action early in the month. On the 1st, Jupiter makes a glorious trine aspect with the Sun and on the 6th, Jupiter turns direct in the heavens.

Both these events suggest success, whether this is in the form of a new job, a promotion or a chance to expand your work or career. In addition, Saturn, the taskmaster of the heavens, turns retrograde in Scorpio and your cash sector on the 2nd and Saturn remains on go slow until mid-July 2014. Personally I feel that this weakens the harsher side of Saturn and you may find that financially things are easier for you over the next few months. It certainly looks as if your career can take off now and that’s got to be a welcome boost.