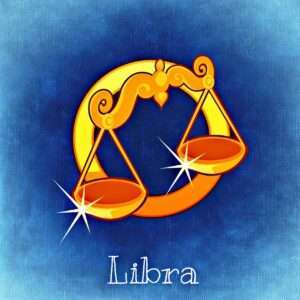 The focus is on other people in your life as April begins with both the Sun and communication planet Mercury in Aries and your opposite sign.

Aries rules relationships in your life, both personal and professional, it’s about your 1-to-1’s, your significant other, your key partnerships.

Aries is a competitive sign and planets in your opposite sign can indicate people you’re in conflict with, your enemies.

You might still be dealing with the aftermath of last month’s eclipse on March 23rd which cut across the Aries/Libra axis. If there were significant changes during this time with regard to a specific relationship, you need to continue with negotiations and it looks, for now at least, that it will be difficult to get your own way.

Sometimes when there’s strong emphasis on your opposite sign, you feel weak or your energy is low. This is because you’re having to constantly think about other people or take others into account and this can be demanding over time.

Your ruling planet Venus joins the Sun and Mercury in Aries on the 5th where it remains until the 30th. This is potentially good news for love, falling in love and enjoying all that love has to offer. So the Libra scales can tip in both directions now, bringing more happiness into your life via others or bringing some conflict or sadness.

It is important however to ensure that you get your own needs met and you look after no. 1 even if other people want a lot from you in the month ahead.

The 7th-9th is especially lively for your 1-to-1 relationships because there’s a New Moon in Aries on the 7th followed by an unpredictable Sun/Uranus combination on the 9th. New Moons bring new beginnings, the chance to start over. Look out for who comes into your life during this period as this person could play a significant role over the coming weeks and months.

You might be around someone who’s fast-paced, impulsive and spontaneous. If you want to go along for the ride, hop on, otherwise back off and leave them to it.

If you’re looking for love, there are some stunning dates this month and the best are the 12th and 22nd when your planet Venus teams up with Mars and Uranus respectively. This suggests that your love life will be full of surprises and developments could turn quickly thanks to a conversation, an invitation or a twist of fate.

The planet which represents your partner in astrology is Mars and Mars is currently in Sagittarius and your communication sector. This is good news for meeting someone new when you get talking in the street or in your local supermarket. It indicates that you can find love close to home.

Yet Mars turns retrograde this month on the 17th and it’s barely moving at all throughout April. It stations at 8 degrees Sagittarius and instead of being speedy, action-filled, this is a very different Mars.

Mars is halted, stopped in its tracks and needs time to recover, retreat. Think what this might mean for you with regard to love and relationships. Perhaps there’s a shift in your partner’s attitude, you might find it more difficult to get on or have an easy rapport between you. If you’ve been arguing, the conflict might cease suddenly or the opposite way around and Mars retrograde represents a stuck situation, a certain amount of frustration.

It’s difficult to be heard when Mars is on go slow in your communication sector so bear this in mind in the coming weeks whilst Mars is in retreat. Be more patient, don’t expect immediate results and slow down the pace.

There are two more planets turning retrograde this month which is why it’s so important to get on top of matters early in April. The second planet switching direction is Pluto in Capricorn and your home and family sector. This takes place on the 18th and this too indicates that emotions will be heightened during the middle of the month.

The 14th-17th is actually helpful for home and family affairs and events give you a chance to feel more secure, whether emotionally or financially. It’s a good time to put down roots, build strong foundations, help family or ask for their support and hopefully once Pluto’s turned and its energy is weakened, you feel you’re on more solid ground.

The third planet which begins its retrograde phase this month is Mercury, the communication planet. Mercury enters the earth sign Taurus on the 5th and turns retrograde on the 28th.

Taurus rules joint finances in your chart so this is about money matters and you’re wise to focus on money and finances before the end of the month. What needs to be organised, where do you need to pay attention, set new plans/boundaries/guidelines in place?

Taurus rules mortgages, taxes, debts and savings, investments, inheritance, child support, benefits, etc. Be thorough in these areas and ensure your money is safe and secure. The Full Moon on the 22nd highlights the money axis of your chart and this is a good date to sort out a financial transaction and to make a key decision about money.

Once Mercury turns tail, that’s when mistakes can occur or you’re less able to get hold of the money you want or need. Be prepared before the end of April.