It’s been called one of the biggest sporting shocks of all time.

Leicester City Football Club (also known as the Foxes) only started playing Premier League football again after a decade away in the 2014/2015 season. Last year they were placed 14th out of 20 football clubs, narrowly avoiding relegation.

Thus at the start of the current 2015/2016 football season, they were apparently 5,000/1 outsiders to win the coveted Premier League title.

Thanks to the Premier League holders Chelsea scoring 2 to draw 2-2 with Tottenham on Monday 2nd May 2016 and the Premier League title is Leicester’s even before the football season has ended. The celebrations may well continue for quite some time and rightly so.

So why this season? Can astrology reveal why they’ve come to prominence in a completely unexpected manner? Below you’ll see the chart when Leicester City played their first ever match on November 1st 1884. It was a Saturday so I’ve elected a time of 3pm, the usual kick-off time for football matches.

If the chart time is correct, the planet to note is Jupiter. This is because with a Pisces Ascendant (the sign rising on the horizon) and a Sagittarius Midheaven (the success point of the chart), Jupiter is not only the ruling planet but it also rules the all-important Midheaven, where the club’s heading, their future destiny.

Jupiter doesn’t shout out success in its sign of detriment, Virgo, but what was important for Leicester at the start of the 2015/2016 season was Jupiter’s placing in the zodiac. The Premier League season kicked off on Saturday 8th August 2015 and 3 days later on August 11th 2015, Jupiter entered Virgo for the first time in approximately 12 years.

This means that during the current 2015/2016 season, Leicester City are having their Jupiter Return which was exact on August 21st 2015. Jupiter remains in Virgo until September 2016 and your Jupiter Return is often a time of success or at the very least, expansion and growth. The potential for good fortune is there if you’re willing to believe, work hard and take a risk.

In Leicester City’s chart, Jupiter is at the apex of a dynamic T-square with Mars in Sagittarius opposing Pluto in Gemini. This is a competitive and ruthless combination which fits the symbolism of Leicester, the underdogs (Virgo), up against the big boys, the top teams of Premier League football (Mars/Pluto).

Mars – the Warrior, the Fighter

The other important transit to note which is happening now relates to Mars, the male planet, the warrior planet, forceful and ambitious. You’d expect Mars to dominate in a chart about football and Mars is currently retrograde in Sagittarius, the same sign as Leicester’s natal Mars. This means that Leicester is having their Mars return this summer and not one hit but three.

Your Mars return happens approximately once every two years and it’s a focused energy, direct and strong. It gives you extra determination and drive. The exact dates of Leicester City’s Mars transits are March 20th 2016, May 13th 2016 and August 13th 2016. It’s the middle ‘hit’ that’s showing strongly for Leicester City FC because the final matches of the Premier League season take place on May 15th 2016.

There are two other charts which are also important to note. The first is the manager, Claudio Ranieri, who took charge at Leicester City less than a year ago in the summer 2015 and has quite literally performed miracles. Claudio was born on October 20th 1951 in Rome, Italy (no time of birth). This means he’s a Sun Libra, the sign which is a diplomat, strategist and at its best a brilliant coach/team manager.

Claudio has two planets in Virgo; sporty Mars at 9 Virgo and Libra’s ruling planet Venus at 12 Virgo. This means Jupiter has transited over these two key planets in his chart during the current football season. The most notable transit is Jupiter about to turn stationary direct on May 9th 2016 at 13 Virgo, very close to Claudio’s natal Venus. You would expect Venus to be linked to Claudio’s career sector with this astrology, but it can’t be confirmed without a time of birth.

The other chart data concerns the Leicester City player Jamie Vardy, who’s been their top scorer this season. In fact, Jamie scored in 11 consecutive Premier League matches, a new record, and he was voted the FWA Footballer of the Year for the current season. Jamie’s date of birth is January 11th 1987 and he was born in Sheffield, UK (no time of birth). Therefore he’s a Sun Capricorn, the sign ruled by Saturn.

Jamie’s currently 29 which tells you that this year is his Saturn Return year, a definitive marker, the astrological coming-of-age. Saturn is the planet of responsibility and maturity and the Saturn Return can be a tough experience for some. Yet Saturn is Capricorn’s planet and at its best Saturn represents status and respect and no doubt Jamie Vardy is going to be in demand.

In a lovely show of synastry, i.e. the connections between two charts, Jamie’s Venus is at 4 Sagittarius, the same degree as Leicester City’s winning Mars at 4 Sagittarius. Together, they’re a match made in heaven. 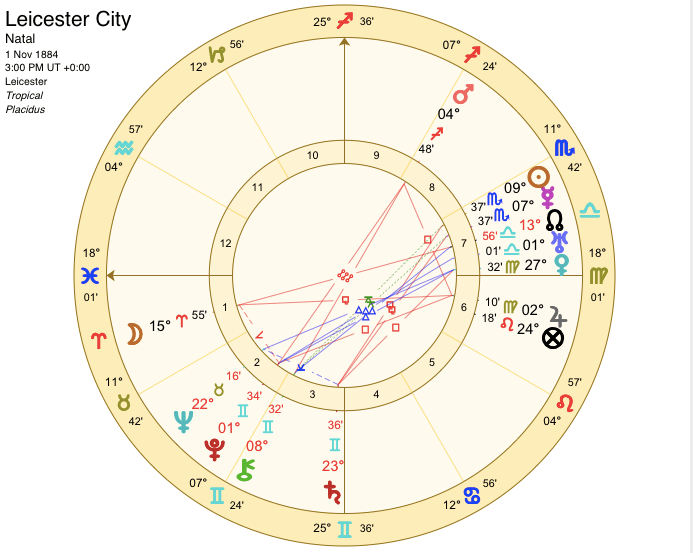