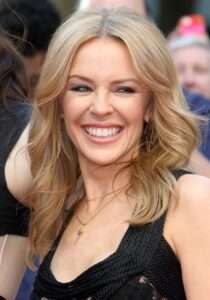 This is the Peter Pan sign of the zodiac, youthful and vibrant, and even though Kylie turns 50 next year, she remains sweet & petite. The girl inside shines through.

Yet one area of Kylie’s life that seems to challenge her is her love life. Over the last decade and a half, she has been in three high-profile relationships with the French actor Olivier Martinez, the Spanish model Andres Velencoso and most recently, the British actor, Joshua Sasse.

All three relationships lasted a few years but none lead to long-term happiness for Kylie. This last relationship between Kylie & Joshua lasted the shortest even though the two have been engaged for almost a year.

Since the split earlier this week there have been rumours of infidelity on Joshua’s part and allegations from Kylie’s family that he was an ‘opportunist’. Whether any of this is true, their whole relationship has been defined astrologically by the planet Saturn.

Saturn is the taskmaster of the heavens and since December 2014, Saturn has been in Gemini’s opposite sign of Sagittarius, ruling relationships. Admittedly Saturn can be a positive factor when it comes to longevity, commitment, settling down but it’s never going to make for a light & easy relationship.

In fact, Saturn is the opposite of light & easy as it represents hard work, a reality check and is more closely aligned to what’s lacking than what’s joyous or abundant. It can be a tough, exposing transit and when things go wrong, it often indicates the end, the final scene.

So their whole relationship has been played out under the gaze of Saturn and it was only last month, January 2017, that Joshua had his first Saturn Return. He has Saturn at 22 degrees Sagittarius. This is often a time of life reassessment and especially with regard to relationships, you don’t always know who you are or what you want until this key astrological event has taken place.

Look at Kylie’s birth chart and her partner planet is Saturn as Aquarius is the sign of her Descendant, the relationship point.  Kylie’s Saturn is at 21 degrees Aries and this month, February 2017, the planet that’s linked to splits, Uranus is at 21 Aries. So Uranus was the catalyst to break open the flaws in her relationship.

Kylie isn’t the first Gemini who’s had a tough time of things whilst Saturn has been in Gemini’s opposite sign of Sagittarius. Last year, I wrote about Gemini Angelina Jolie’s (b. June 4 1975) split from Brad Pitt (b. December 18 1963). Here’s the direct link: Brangelina Split: The Role Of Saturn. Their relationship was another Gemini-Sagittarius pairing.

The other high-profile actor who immediately springs to mind is Gemini Johnny Depp (b. June 9 1963). He both married (February 2015) and divorced (May 2016) Amber Heard whilst Saturn was in Sagittarius.

This isn’t going to be the case for everyone that a relationship fails when Saturn opposes your Sun sign but it’s certainly going to bring a new level of duty or responsibility.

For example, Gemini Russell Brand (b. June 4 1975) got engaged and had a baby with Saturn in his opposite sign, the opposite of his more flighty behaviour.

From Saturn to Jupiter

So will Kylie bounce back? Here’s hoping so. Saturn reveals what doesn’t work so at the very least you can learn a great deal about yourself and others during Saturn transits. As long as you put what you learn into practise, you can theoretically emerge wiser and stronger once Saturn’s moved on.

Plus, it won’t be too long before opportunity planet Jupiter enters Sagittarius in November 2018. This will be a welcome break for Gemini & Sagittarius after their 3 year Saturn transit comes to an end in December 2017.

Kylie might also like to read another article on this website that was written back in 2012, which could be helpful to her: What Makes A Gemini Like Johnny Depp Happy? Sometimes Sun Gemini prefers life when it’s varied and exciting and that can translate into love too.