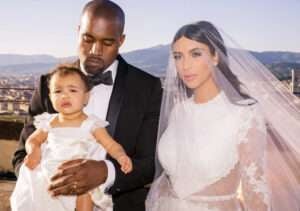 Have you ever wondered whether astrology can help you choose your perfect wedding date? The answer is ‘yes’ and the wedding chart for Kim Kardashian and Kanye West one year ago today suggests they either got lucky choosing when to get married or who knows, they may have consulted an astrologer.

Kim and Kanye were married in a lavish ceremony on May 24 2014 in Florence, Italy and said ‘I do’ at approximately 6pm. Whether they knew it or not, they married on a very auspicious day when there was a spectacular planetary pattern in the heavens.

This was a Grand Water Trine which includes three planets that form a triangle shape in the sky and create an easy flow of energy. As water is the element that rules emotions and depth of feeling, this was ideal for a romantic occasion.

The planets in the Grand Trine were Jupiter in Cancer, Saturn in Scorpio and Chiron in Pisces. Jupiter and Saturn were working together harmoniously on the day to bring dreams (Jupiter) to reality (Saturn). Plus Chiron, the planet associated with healing, is linked with magical and shamanic qualities and adds a spiritual quality to this remarkable Grand Trine in water. This was perfect for a marriage blessing and a divine union.

Kim and Kanye are well-suited astrologically and they have classic Sun Sign love compatibility. Kanye is a Sun Gemini (b. June 8 1977) and Kim is a Sun Libra (b. October 21 1980). Gemini and Libra are both air signs so Kim and Kanye are on the same wavelength with a similar need for social interaction. They are both popular celebrities who are constantly on the go with a huge network of friends and influential associates which suits the air sign mentality.

Their Moon signs show they share a deeper connection because they were both born with the same Moon sign, Pisces. Pisces is a romantic sign, creative and imaginative and overflowing with hopes and dreams. Moon sign compatibility is especially important for living together as the Moon rules your inner needs and what fulfils you on a routine basis. Moon signs that are compatible bond a relationship on a soul level which is true for Kim and Kanye.

In Kim’s chart, the Moon at 28 Pisces is closely conjunct her IC at 28 Pisces, the part of the chart that rules home and family. The Moon is in a close opposition to Jupiter, the luckiest planet of the heavens, which is at 28 Virgo and conjunct her Midheaven, the career point of the chart.

This not only promises huge success (Jupiter) but shows the importance of her family (Moon) and how they’re linked to her fame. Keeping Up With The Kardashians (2007) a reality TV series that followed the Kardashian clan proved a huge hit and the launch pad for Kim’s mega-stardom.

With a first house Neptune, Kim was always going to be attracted by glamour and fame and her role as a socialite, social media personality and fashion designer fits her Sun in Libra beautifully. Libra is the sign that rules relating and her marriage to Kanye is Kim’s third attempt at tying the knot. Will it be third time lucky?

Kanye is a star in his own right. A successful hip hop recording artist, he is one of the world’s best-selling artists of all time. He’s a Sun Gemini which backs up his song-writing abilities but he also has three personal planets in Taurus; Venus, Mars and Mercury and Taurus is the sign that rules singing. Taurus rules the throat in astrology and people with a strong Taurus signature in their birth chart often have a distinctive voice. Two of the Taurus planets are in Kanye’s 10th house so here’s the career as a singer.

Kanye was a long-time friend of Kim and their first child, a daughter called North, was born on June 5 2013, both helpful factors for a long-term union. It’s when you look at their marriage chart however that you see their union feels blessed by the alignment of the stars at the time they said ‘I do’.

Kanye’s Ascendant is 18 Cancer, the same degree as Jupiter on the day of the marriage. Jupiter transits often coincide with happy occasions and with Jupiter linking the Ascendant/Descendant axis of his natal chart, this was a beautiful omen for Kanye on the day of their wedding. Plus Chiron at 17 Pisces was conjunct his romantic Moon at 16 Pisces, another strong contender for a significant event in Kanye’s life and one that promises healing through love.

In Kim’s natal chart, Mercury is at 19 Scorpio and Mercury rules her Gemini Descendant so Mercury is her partner planet. With Saturn in the heavens at 18 Scorpio on the day of the wedding, this planetary conjunction by transit is a symbol of commitment, settling down and making their relationship legal. Plus Mercury in Kim’s chart trines Kanye’s Moon and Ascendant, stunning synastry for the pair.

This means that when you put their two natal charts together as a couple, key factors in their horoscopes recreate the Grand Water Trine that was active in the heavens on the day of the marriage. They could not have chosen a better time or date to celebrate their love.

There are other key factors in the wedding chart that correlate with real-life events. Leo is the sign on the chart’s Midheaven which shows that this was one lavish occasion with no expense spared. There was a girls’ hen night at a private bash in the Eiffel Tower in Paris, followed by a pre-wedding dinner in the Palace of Versailles with entertainment by Lana Del Rey. Then the wedding took place at a special altar backed by a wall of flowers that was built in Forte Belvedere with stunning views over the medieval city of Florence.

At the time of the wedding ceremony, the Moon was in Aries and in conjunction to Uranus, the sign of modern technology. Aries is a self-oriented sign, the first sign of the zodiac and this is a lovely symbol of the huge number of ‘selfies’ that were shown on social media. The celebrity guests were queuing up to have their pictures taken in the wedding photo booth.

To sum up, the Gods were out in style at the wedding of Kim and Kanye and this must be a hopeful sign that their union was blessed and their marriage will stand the test of time.