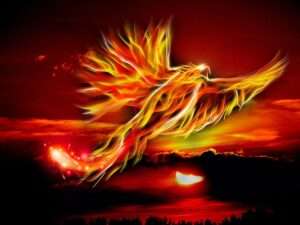 Here comes the fire sign energy. Fire signs are energetic, dynamic, motivated and natural risk-takers. Think what fire is like: the colours are red, orange, yellow; fire blazes bright, it crackles and sparks; it’s heat and intensity. There’s a vitality about fire signs, they’re itching to go with a strong desire to seek out adventure and live life to it’s fullest.

There are currently 3 key planets in fire signs (4 if you include the Moon in Leo this weekend) and between the four of them, you’re being encouraged to do more of what you love and more importantly to do something daring and different.

Venus, the love planet, is in Leo for most of this summer (June 5-October 8 2014) except for two weeks in Virgo late July; Jupiter, the planet of opportunity, entered Leo on July 16th 2014 where it remains until August 11th 2015 and Uranus, the unpredictable maverick, first entered Aries in 2010 where it remains for 9 years.

It’s also the best of the three as both Jupiter and Uranus are now in direct motion and this stunning trine aspect is one of the reasons why 2015 is marked as special.

Together these two planets symbolise the entrepreneur, the risk-taker extraordinaire, the person who dares to be different, the radical activist. They represent breaking out, breakthroughs, genius potential.

These two planets are calling out for adventure so dust off your passport, think global and decide where in life you’re ready to step up and take a risk. Extend your reach and say Yes to life!

The feel-good fire sign energy is building all weekend as the Moon in Leo sits next to both Venus and Jupiter in the night sky. Gaze towards the heavens this weekend and you’ll view a most magnificent night-time display, weather permitting.