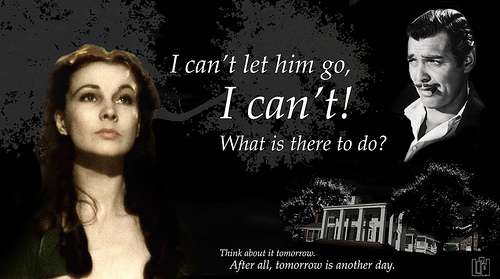 Gone With The Wind by Margaret Mitchell was first published as a novel in 1936. The film version starring Clark Gable and Vivien Leigh as the star-crossed lovers was released in 1939 and is regarded as one of the best films of all time.

It was only in 1978 that a US astrologer by the name of Darrell Martinie was shown notes from Margaret Mitchell’s library which contained clues suggesting that the book was an astrological allegory and that the characters of the famous novel were based on the signs of the zodiac. The following excerpt is taken from Neil Spencer’s excellent book True As The Stars Above

“Scarlett O’Hara is a dashing Aries named after the colour of her ruling planet Mars. Her father is a Taurus who not only owns a farm in earthy Taurean fashion but named it the Tara plantation… Scarlett’s two twittering aunts, Prissy and Pitty Pat, are a pair of Geminis whose names comply with the sign’s love of wordplay. Rhett Butler, the great love of Scarlett’s life, is a passionate Leo and a fellow fire sign who in true don’t-look-back Leo style delivers the line, ‘Frankly, my dear, I don’t give a damn.’ Their daughter, Bonnie is the third fire-sign Sagittarius and, born under the sign of the Centaur, meets her end in a riding accident. Ashley Wilkes, the rival for Scarlett’s love, is a wealthy Capricorn whose plantation Twelve Oaks, reflects both solidity and, perhaps, the twelve signs of the zodiac.”

Margaret Mitchell isn’t the only novelist to be a closet astrologer and there’s been much talk about J K Rowling’s immensely successful Harry Potter books and the astrological references within. Hogwarts is a school of Wizardry after all and the Ministry of Magic plays a key role in Harry Potter’s world.

It’s fairly easy to deduce that Harry Potter is a Leo with the same birthday as J K Rowling, the 31st July. Plus in 2010, a detailed personal horosocope analysed and illustrated by the author at the time she was writing her first Harry Potter novel came up for sale. The auctioneer commented that J K Rowling “displays a detailed knowledge of Western astrology which was later to play an important part in her books.”