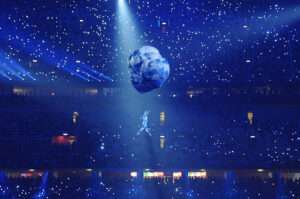 This five part series wouldn’t be complete without mentioning one of the most famous pieces of music to be inspired by astrology, ‘The Planets’ by Gustav Holst.

Holst was well-acquainted with astrology and mythology and the Greek idea of the ‘Music of the Spheres’.

First performed in 1918, each of the seven movements of the orchestral suite are based upon a different planet and its corresponding astrological character as follows:

Pluto was only discovered in 1930, some years after Holst composed the music and the Sun and Moon aren’t planets at all, so the list is complete.

In 1921, Holst adapted his Jupiter suite to fit the words of the poem, ‘I Vow To Thee, My Country’ by Cecil Spring-Rice. It has become an iconic hymn as it’s associated with Remembrance Day and was played at Charles & Diana’s wedding as well as Princess Diana’s funeral, and more recently it was featured in the Opening Ceremony of the 2012 Summer Paralympics in London.

You can read the poem in full here and below is a You Tube link to Katherine Jenkins singing the hymn live in 2007.