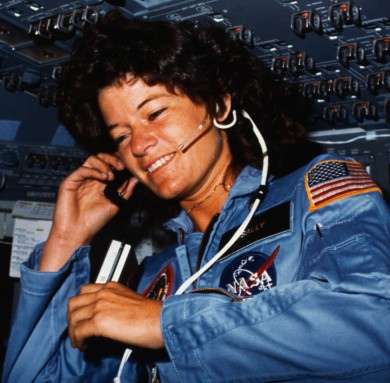 My namesake, the astronaut Sally Ride

Have you come across the diverse set of quizzes on Buzzfeed yet?

They’re doing the rounds on Facebook and if you feel so inclined you can find out which Harry Potter star you are (Luna Lovegood), which Pop Star Diva you are (Pink), which Muppet you are (Camilla the chicken), which Disney Princess you are (Mulan) and even which font you are (Helvetica). The characters in brackets relate to the quizzes I’ve already taken.

The strange thing is most of the answers make some weird kind of sense to me, well perhaps not the font, but they are all right about certain aspects of my character.

That is until I took the which Career should you have quiz? and the answer I received was Astronaut. My first reaction to this was ‘no way’, I can’t think of anything worse than going into space, I’m not a science geek and my passion for astrology stems from my arty background and my love of history, mythology and symbolism.

I posted my answer on Facebook and dismissed it as wrong until a friend, Lotte Lane, pointed out that weren’t astrology and astronomy the same thing? Again my immediate reaction was ‘no’, they’re not and even though a good astrologer will know some astronomy, most astronomers disregard astrology completely. You only need to watch Stargazing Live with TV presenters Brian Cox and Dara O’Briain to know what they think of astrology (not a lot).

Yet traditionally if you were interested in the planets and stars, you were both an astrologer and an astronomer as they were one combined knowledge. The derivation of the words reveals further clues as ‘astro‘ means star whilst the suffix ‘-logy‘ means speech or the study of whereas the suffix ‘-nomy‘ means arrangement or the system of laws. An astrologer’s trusty companion is a planetary ephemeris which shows where the planets are in relation to the zodiac and an astronomer’s apparatus of choice is his/her telescope to record the movements of the planets.

The Language of the Stars

I like to think of astrology as meaning ‘the language of the stars‘ and astronomy as ‘the arrangement of the stars‘. One tells a story whilst the other provides the data. This fits perfectly for me as a linguist because an astrologer interprets the meaning of the stars in the same way you would interpret a foreign language. It’s a knowledge that’s been around for thousands of years but in our science-oriented modern world it’s a knowledge that many of us have lost sight of.

I Am An Astronaut

This got me thinking about what an astronaut is and of course this word too has the prefix ‘astro-‘ meaning star. In fact, the word astronaut means literally ‘sailor of the stars‘ which is actually the perfect career for me. Thanks, Lotte. It’s just that I’d rather navigate the stars from the comfort of my front room than set off on an real journey into outer space.