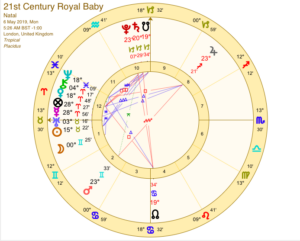 The new royal baby kept us waiting. In May 2018, after Harry & Meghan’s wedding, I had predicted a pregnancy announcement in the autumn. We first heard about the pregnancy in October 2018.

I was then asked to predict a date of birth last year for the press and I plumped for the Full Moon in Libra two weeks ago. Meghan’s Moon is in Libra and I had an inkling that the new baby might be a fiery Sun Aries, independent and bold.

Harry & Meghan are a 21st century royal couple and Meghan wasn’t a typical choice for a ‘royal bride’ for various reasons; older than Harry, mixed-race, TV star, etc. The new couple flouted convention at their wedding, choosing their celebrity friends as guests and opting for an eclectic wedding service.

Around the Full Moon in Libra on April 19th, numerous psychics and clairvoyants were saying the baby was already here. News that the couple wouldn’t announce the birth immediately seemed to confirm this fact.

Plus, astrologers were aware of the Sun/Uranus conjunction in Taurus, exact on April 22nd. Uranus is the planet of unconventionality and Uranus was a key planet during Harry & Meghan’s wedding.

The word was out that this baby would not fit the conventional archetype of the royals. And then…. the waiting began. Finally, the birth announcement came almost immediately after the baby’s birth, two days after the New Moon in Taurus on May 4th.

The new baby is Sun Taurus, the perfect star sign for being part of the Windsor family. Great Granny (the Queen), plus two of his cousins, Charlotte & Louis are Sun Taurus. Grandad (Charles) and Dad (Harry) both have their Moon in Taurus. Typical Taurus traits are patience & reliability, a sensual appetite for life and a love of nature. They can be stubborn too.

The Sun, representing the father in astrology, is on the baby’s Taurus Ascendant, the sign that was rising when he was born. It’s one factor in the horoscope which suggests a close connection with Harry, his Dad.

Harry and his new baby are both earth sign Suns, Virgo & Taurus. They share the placing of Saturn, the planet of responsibility, on the Midheaven, the career/destiny point in the birth chart. Money (Sun/Ascendant Taurus) and status (Saturn/Midheaven Capricorn) are key elements of the new baby’s ‘royal’ pedigree.

The baby’s horoscope indicates he will be a good looker too, as his Taurus Ascendant is ruled by Venus, the planet of beauty. With the Sun conjunct his Ascendant, he’ll know how to get noticed. Although, with a full 12th house, his horoscope indicates that he will want to keep certain aspects of his life private.

In fact, this young man may not always be comfortable with the level of responsibility and demands of his royal destiny. He’s born during the Saturn/Pluto/South Node combination in Capricorn, a symbol of evolving and changing times in the world.

As this trio fall on his Capricorn Midheaven, he could be pulled into playing a role that he finds difficult or challenging. It suggests a weight of responsibility that he may not want to avoid or be able to steer away from. With the North Node conjunct his Cancer IC, his family and personal life is likely to bring him the most fulfilment but it won’t always be an easy path to walk.

He may choose to keep his love life and personal preferences to himself or prioritise them over his public destiny. Note his ruling planet Venus is hidden away in his horoscope and square to the formidable trio of Saturn/Pluto/South Node on the Midheaven.

A lively Moon Gemini indicates a mischievous & chatty nature (born half an hour earlier and he would have been a triple Taurus – Sun/Moon/Ascendant Taurus). The Moon rules the mother in astrology. The new baby’s Moon Gemini will connect him closely to his Mum, Meghan, an extrovert yet gentle Sun Leo/Moon Libra combination.

Other factors in the horoscope suggest he’ll be wickedly witty and won’t shy away from controversy. Communication planet, Mercury, is in fiery Aries and moving towards a conjunction with live-wire Uranus in Taurus. Yet, both planets are ‘behind closed doors’ in the 12th house. Often, you find that individuals in the public eye have a full 12th house, as there are clear divides between their public and private personas.

The fiery personality is definitely there, thanks to Venus in Aries and a Mercury Aries/Uranus Taurus conjunction. Plus, the new baby was born on the day of a Mars/Jupiter opposition, which adds adventure and daring to the mix.

This whole combination – Mars Gemini/Jupiter Sagittarius – indicates a love of learning and a passion for foreign cultures and worldly ideas. Two passports, two homes/countries, a product of his diverse family background. The map of the heavens during his birth shows both the traditional family he was born into and his place in the world as a 21st century royal.

Harry & Meghan’s new baby boy shares a birthday with their celebrity friend George Clooney (May 6). He would be the ideal new godparent welcoming the new baby in to a world of luxury, class and limitless opportunity.