We are on the verge of a new year and there are many of you (myself included) who will be more than ready to step into 2017 and close the door on 2016. Here’s a quick look at how the astrology is shaping up as the clocks strike midnight, what the major planetary patterns can tell us about this important shift from one year to the next.

It does already feel as if there’s a lot to look forward to in 2017 and the opportunity to start over in some way brings a thrill of excitement. This fits with the numerology of these two unique years: 2016 was a 9 year, a year of endings whereas 2017 is a 1 year, a year of beginnings.

The major astrology follows suit. 2016 was dominated by planets creating aspects in mutable signs: Jupiter in Virgo until September 2016, Saturn in Sagittarius and Neptune in Pisces. Mutable signs are changeable and the energy spreads out far and wide.

Whereas 2017 will be predominantly a year when planets in cardinal signs dominate: Jupiter in Libra until October 2017, Uranus in Aries and Pluto in Capricorn. Cardinal signs thrive on action as they are the leaders and motivators of the zodiac.

There was much made of the fact that many celebrity names passed over in 2016, some unexpectedly and at a relatively young age. The symbolism showed astrologically in the Saturn-Neptune square, a dominant feature of the year that’s past.

Saturn is a symbol of Old Father Time, linked to endings and Neptune is the celebrity planet and is often prominent in the charts of people who become glamour icons or famous names.

As Neptune represents all areas that are an escape from reality, the celebrity world being one, it’s also linked to drink and drugs and some of the younger deaths were individuals who battled with addiction at times throughout their lives.

Saturn rules our foundations, the status quo and as Neptune dissolves what it touches, 2016 has also been a year when what we thought was solid and unbreakable began to fade away. Together these two planets trigger disillusionment and voters around the world in 2016 showed that they were unhappy and ready for change.

In 2017, the major planetary pattern involves Jupiter in Libra. Libra is the sign of relationships and Jupiter expands what it touches. Since September 9th 2016 when Jupiter entered Libra, this has started to bring in a theme of ‘anything goes’ with regard to relationships. 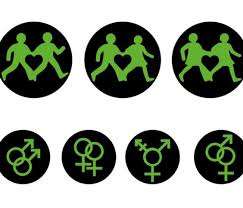 It’s about finding the right relationship, what works for you rather than conforming to society.

Transgender issues and ‘gender fluid’ individuals are in the news and becoming mainstream; the gender neutral ‘ze’ has been mooted as a third option to ‘she’ and ‘he’ and in London there are a host of delightful new symbols on traffic light pedestrian crossings, showing that relationships exist in all shapes and sizes and rightly so (see right).

It’s perhaps no surprise that the 2016 word of the year was ‘post-truth’. This means ‘circumstances in which objective facts are less influential in shaping public opinion than appeals to emotion and personal belief’. 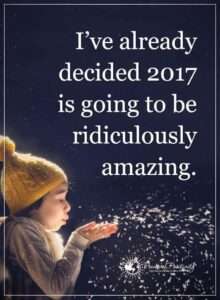 Here’s wishing you a 2017 when you’re more than ready to be awesome.

Loving the message from Power of Positivity (see left).