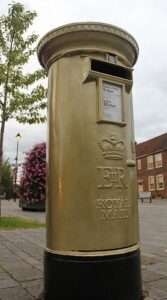 The Olympics has been a glorious event and even though I’m theoretically taking August off from blogging, it did seem a shame not to mark this marvellous show.

In our house and many houses across the UK, we’ve been cheering on Team GB and the London Olympics 2012 has been inspiring people and children all over the world. What’s not to love about an event that proves hard work, grit and confidence create winners.

Below is a copy of the chart of the Olympics Opening Ceremony which took place on Friday 27th July at 9pm BST in London UK. A very useful tool for all budding astrologers is retrodiction, which is a chance to look back in retrospect at what happened. It’s the opposite of predicting the future, instead it’s a way to learn astrology by linking past events to the planetary movements. Here’s my take on the chart and the key astrological factors mirrored in real life.

Firstly, there was a lot of talk before the event about the fact that the Olympics was starting whilst Mercury (communication) was retrograde and one astrologer even dubbed it the Retrolympics.

You can always expect a certain amount of chaos with Mercury retrograde and this showed through the many empty seats in the first few days, fake tickets being sold, the controversial Olympic traffic lane in London (often empty with gridlocked traffic stuck in the remaining two lanes) and my favourite, the wrong flag. The South Korean flag instead of the North Korean flag – oops!

The Ascendant of the chart is at 9 Aquarius and the Full Moon on Thursday 2nd August cut across the Ascendant/Descendant axis of the Olympics chart. A Full Moon represents culmination and achievement and it dominates the night sky. This Full Moon promised a great deal and after a slow start for Team GB, the first week got better and better culminating in Super Saturday on 4th August when we won three gold medals in the space of 45 minutes.

One of those medalists was Jessica Ennis (b. 28 Jan 1986), the golden girl of athletics. She is an Aquarius and in her chart the Sun at 8 Aquarius is next to Venus at 10 Aquarius. Everyone loves her (Sun/Venus Aquarius) and these two key planets straddle the ASC of the Olympics chart. Here we see the pin up girl of Team GB stamping her mark on the Olympics and giving all of the UK cause for celebration. Super Saturday was Team GB’s ultimate moment in the global spotlight.

Planets on the angles shout out to be heard and on the Descendant, the angle of the chart that represents the people, we find the Sun in Leo next to Mercury retrograde in Leo. Leo is a colourful and dramatic sign but it also represents pride and this was an occasion for many people to feel proud (Sun Leo DSC) and tell the world about it (Mercury Leo DSC). “Proud to be a Brit” was a common tweet during the Olympics fortnight and a stark contrast from the London riots exactly one year ago.

Leo’s a royal sign and our younger popular royals, Prince William, Prince Harry and the Duchess of Cambridge, Kate, were frequently seen cheering on the team. Leo rules gold and I love the story of post boxes being painted gold in villages and towns around the UK where the gold medal winners come from. Plus the fact that all gold medal winners from Team GB will be honoured on a special set of Olympic stamps. Leo at its best.

And what a haul of medals. As I write this on the morning of the last day Team GB have won 62 medals in total, 28 of them gold, with possibly more to be won. Originally when I saw the chart, I thought the success sector (10th house) looked empty. With Sagittarius on the Midheaven, Jupiter is down at the base of the chart in Gemini, a sign that Jupiter’s not comfortable in, but London is a Gemini city, Jupiter rules success and on the IC, the base point of the chart, this gave Team GB the home advantage. We reeled in the medals with our biggest win ever.

So where do we find Team GB in the chart? I believe this is the ruling planet which is Saturn in Libra. It sits next to the Part of Fortune (a lucky factor) and in wide aspect to Mars, the planet most closely associated with athleticism. The Mars/Saturn conjunction is exact on 15th August and although these are the two malefics in astrology, i.e. a difficult combination, Saturn is exalted in Libra and Mars/Saturn together suggest hard work, effort and concentration.

The life of a successful athlete requires not only physical ability and strength but also self discipline and even self denial to remain focused on their goal. It takes a certain type of person to be a medal winner and I bet a lot of the winning athletes have a strong Mars in their chart. In addition, Saturn in Libra is at the same point in the heavens as one of the fixed stars, Spica, which signals prosperity, gifts and good fortune.

In the UK we have been blessed by a glorious Olympics which has given our nation back the feel-good factor. Finally, my favourite astrological fact is that Sir Steve Redgrave (rowing), Sir Chris Hoy (cycling), the two greatest British Olympians, and double Olympic champion the Mobot, Mo Farah, all share the same birthday of 23rd March born under the sign of Aries. If you ever wanted confirmation that Aries rules speed, here’s your proof. Oh yes, and Usain Bolt, fastest man in the world, is born under the royal sign Leo. That’s Sir Mo Farah and King Usain Bolt to the rest of the world.