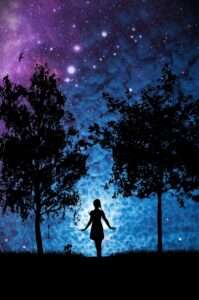 For some, this might already have been a week when Scorpio-themed events dominated because on Sunday 17th April and Monday 18th April, first Mars and then Pluto turned retrograde, i.e. switched direction in the zodiac.

This is important because these two powerful planets are co-rulers of the sign of Scorpio and deep dark themes have been building all week. The Scorpio Full Moon feels like the climax of this intense energy.

Scorpio is the sign of healing, regeneration, transformation. It rules sex, money and death and all things taboo. It’s linked to the psyche, what’s hidden and Scorpio’s keyword is power, the ability to use power to good or bad effect.

We’re hanging out in the underworld when we’re in Scorpio’s domain. As a Sun Scorpio myself, there’s been more than  enough evidence this week of Scorpio themes as close friends deal with life-or-death situations and one of my all-time heroines, fellow Lancashire lass, Victoria Wood, passed away. I’ve already been immersing myself in some of her greatest comedy clips, marvelling at her brilliance and weeping at her untimely passing and I’m planning to watch more.

In a weird twist of fate, a black bird flew down our chimney last night and needed rescuing. Black is Scorpio’s colour and birds are my phobia. Fear and foreboding can come in different guises but in some shape or form, you too might find yourself pulled inward now, needing to deal with the shadow side of life, finding the courage to venture into the dark.

This is not a comfortable place to be but if you are a Scorpio or have Scorpio planets in your chart, you might already understand that a journey through the underworld can unearth hidden riches and when you explore and embrace all of life, both the light and the dark, you often emerge wiser and stronger for the experience.

In the Western world, we’re not educated to have a close relationship with death and perhaps this is because death as seen as the end of the road whereas in other cultures and ancient traditions, it’s a transition, moving from one world to the next. Most of us do understand however that when someone close dies it’s as important to celebrate their lives joyfully as it is to mourn fully.

Yet that doesn’t stop us steering away from pain, numbing ourselves from feeling ‘too deeply’, running from difficult emotions. Even when we know that it’s only when we open our hearts fully and dare to love completely that we experience life at its fullest and most vibrant intensity.

In astrology, life and death have a close bond and they complement each other via the axis of opposite signs, Taurus and Scorpio. During this Full Moon, the Sun is in the earth sign Taurus linked to nature and growth and the Moon is in the water sign Scorpio linked to death but also rebirth. Regeneration, compost, the eternal cycle of life and death which is never-ending.

The Full Moon in Scorpio can highlight where you need to be healed and where best to channel your own healing abilities. You might uncover issues around power, where you feel powerless, where you’re in control and where you can tap into your own inner power to accomplish incredible feats. You can learn a lot about yourself if you listen carefully during the Full Moon period.

This Full Moon links in very closely to my natal Sun in Scorpio and it seems to be teaching me that death is random. The Queen, herself a Sun Taurus, celebrated her 90th birthday on April 21st 2016 whereas one day earlier April 20th 2016 we lost comedienne Victoria Wood, another Sun Taurus who died too young, age 62.

The light in the dark

Death is undoubtedly a powerful experience for the people left behind, one in which ultimately we are often powerless to determine when, how or why. All that we can do is celebrate and honour those who have passed and commit to living our own lives as fully as possible.

The black bird who flew down our chimney finally recognised that the open door lead to the light and freedom. He soared off ready to live another day. When you’re given a second chance, embrace it fully. Tap into your emotions during this powerful Full Moon in Scorpio and seek the light in the darkness.