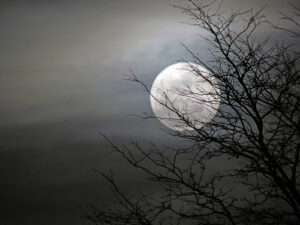 Tonight’s Full Moon in Scorpio (exact at 3:35am GMT, Sunday 6th May) is called a ‘super moon’ as it’s closer to the earth than usual. I love seeing the Full Moon in the night sky and this weekend’s promises to be “bigger and better”, and that’s not just hype.

The Moon plays a key role in our world with its influence on the tides and we’re all meant to go a little bit crazy when the Full Moon is in the sky. There’s the myth of the werewolf (half man/half wolf) howling at the moon and “lunacy” derives from the word “lunar”. Police stations often have more staff on standby when there’s a Full Moon, especially when it falls on a Saturday night. We’re all “lunatics” during the Full Moon period.

This Full Moon is in Scorpio and emotions are likely to run high whether you’re out on the town on Saturday night or enveloped in the bosom of your family for the Bank Holiday weekend. Either way, expect depth of feeling and a passionate, intense atmosphere. Intensity and passion are Scorpio words and Scorpio is a feminine sign. The Moon in Scorpio is especially witchy and magical and taps into all things dark and hidden. It’s a Full Moon ripe with power and potential.

The Moon has always been linked with women and in ancient times, Moon Goddesses ruled over men. Women were fertile, creators, the ones who gave birth to new life. The Moon played an important part in agriculture and food, vital elements of life, and time was defined by the 13-month lunar calendar. Each month consists of approximately 28 days, one whole cycle of the Moon as it waxes and wanes from Full Moon to New Moon and back to Full Moon. A woman’s menstrual cycle synchronises with the Moon’s phases.

On this powerful Full Moon in Scorpio, I urge you to honour the feminine and recognise the power of feminine qualities: nurturing, insight, caring, protection, sensitivity, thoughtfulness, habitual behaviour, love, service and, most importantly, intuition.

This is the perfect opportunity to make an important decision in your own life and trust your intuition in doing so. At the Full Moon it’s about doing what “feels” right rather than what you think you should be doing. Be confident and stand strong in your power.

When I was thinking about tonight’s Full Moon, a song that came into my head was Lisa Stansfield’s “All Woman”. It’s one of my all-time favourite songs and it seems fitting to end this article about the power of the feminine and the Full Moon with a chance to hear her song again.