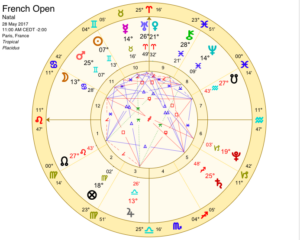 In the mens’ tournament, it was a popular win for Gemini Rafael Nadal (b. June 3 1986). He had the strongest transits (see below) and this year he was unstoppable. It was a Gemini (Nadal)/Aries (Wawrinka) final, which on a basic astrological level fits the chart for the tournament.

There was a lot of debate in the popular comments section whether we could put a case forward for Nadal being a surprise winner. Yes, he’s won it 9 times before (2014 being his last win) and this was ‘La Decima’, a record 10th win. As Patrick suggested in the comments, this could also be a symbol of Uranus dominating the Midheaven of the tournament chart – Uranus represents all that’s new and Nadal has stamped his mark in stunning fashion. He truly is the ‘King of Clay’.

My tennis predictions and the astrology of the four Grand Slam events are now reaching their fifth year. Yet every time it gets to the French Open, my interest wanes. I’m not entirely sure why this is but as a Scorpio Sun sign, this is when the quicker-moving planets are opposite my Sun.

The Sun left Taurus (Scorpio’s opposing sign) only a week ago and this is often a period when your motivation is lessened. Plus, once again there’s a Uranus factor involved in the chart for the start of the tournament (see left). Uranus springs surprises and my surprise has been not to post a prediction!… so far.

The tennis predictions do draw in a lot of attention however, for good or for worse!, and I’ve already had numerous people asking where the predictions are. So in the spirit of Uranus, a last-minute spontaneous rush of astrology.

First a quick look at the astrology chart for the French Open 2017:

What an interesting chart this year. A Venus/Uranus conjunction on the Midheaven (career/success point) and a Mars/Saturn opposition, Mars being ruler of the Aries Midheaven. So the action planet, the male planet Mars in the tennis sign Gemini is being held back by a retrograde Saturn whereas the planet ruling women Venus is in the warrior sign of Aries and very lively next to unpredictable Uranus.

Surprises are Uranus’ trademark and this year, Roger Federer, is not gracing the clay courts. Another factor why my interest waned (see below). Two years ago, it was Sun Aries Stan Wawrinka who was the surprise winner but last year, it wasn’t a great surprise when Novak Djokovic won his fourth Grand Slam in a row. Is Uranus easy to predict? Rarely.

It will be interesting to see how players fare if they have key planets triggered by Uranus in Aries. That might show in a positive light as Uranus currently creates a dynamic Grand Fire Trine with Saturn in Sagittarius and the North Node in Leo, all at 25, 26 and 27 degrees of their respective fire signs.

Also, one of the major planetary events taking place this fortnight is lucky Jupiter moving from retrograde to direct motion on June 9th. Jupiter is often a transit to note as it’s played out time and again to boost the winner’s prospects.

More on the key players:

I know Roger’s not playing but I wish he were! He stunned tennis fans at the Australian Open earlier this year when he won his 18th Grand Slam at the age of 35 after a six month break from tennis. Incredible! Mercury is Roger’s career planet and Jupiter rules good fortune and it was an amazing astrological progression of Mercury and Jupiter almost exact that was the signature for his win.

I don’t always have time to look at progressions as these predictions are written for free. This tends to be a quick whizz through the most important transits and a look at the chart for the event. Yet progressions have shown to be important recently – see Andy’s section too – so I will try and look at them for at least the top few players. You also need a time of birth for a player to use them well.

What’s interesting about Roger’s chart is that Mercury, his career planet, is at 13 degrees Leo so Jupiter is turning direct sextile his Mercury, a positive aspect. Originally I liked this transit for his chances here at Roland Garros but perhaps Jupiter’s not playing out with regard to the tennis.

We’ve already seen that it didn’t boost Sam Querrey and Philipp Kohlschreiber’s tennis fortunes. So maybe this is the right decision for Roger to take a breather and get himself ready for his favourite tennis tournament, Wimbledon.

The no. 1 seed, Brit Andy was a finalist here last year. He went on to win Wimbledon 2016 and won the much coveted no. 1 placing off Novak Djokovic. He had the best Saturn Return and there was a key progression in his chart last year too. Again this lit up his career planet, Mercury in Gemini and it was Venus, one of the benefics, i.e. positive planets that was exactly conjunct his Mercury in 2016. It’s still active but beginning to separate.

What Andy does have in his chart is a host of planets in the fire signs, Aries and Sagittarius, and his Venus at 27 Aries is trine Uranus at 25 Sagittarius. The North Node, a destiny point in astrology, was exactly trine his Venus on May 29th 2017 and is sextile his Mars at 26 degrees Gemini on June 10th 2017. Plus it’s currently his Mars Return, an event which happens every 2 years, and indicates a surge of dynamic energy.

In fact, his chart is popping right now because the Sun at 7 Gemini 13 in the tournament chart is conjunct Andy’s Midheaven at 7 Gemini 46. On its own, the above is lovely astrology and strong for Andy.

There are a couple of tricky planetary aspects however. Firstly, he has foggy Neptune conjunct his Descendant, relationship point, but that might be more personal than professional. Secondly, Saturn is opposing his natal Mars Gemini and he has come into the tournament recovering from a sickness bug. Otherwise, his astrology is looking good.

Rafa is the French Open star and if he wins this year, it will be his 10th win. He also has Mercury Gemini as his career planet and at 26 degrees Gemini, it too is receiving the rays of the Grand Fire Trine that’s so strong right now.

Uranus at 26 Aries is sextile his Mercury as is the North Node, exact on June 10th 2017. But like Andy, he has a Saturn opposition, to his Mercury, although it was exact before the competition and Saturn is beginning to retreat away.

Rafa is one of the tournament’s birthday boys as his birthday takes place on the coming weekend. I’d love to see him win his 10th French Open Grand Slam. It’s not convincing astrology but hopefully he’s in with a shout.

I missed an important transit writing this article at speed. Thanks to James Green for pointing out that Nadal’s Sun is at 12 Gemini 49 and lucky Jupiter turned direct at 13 Libra 13, i.e. in a positive trine aspect to Nadal’s Sun during the tournament.

Does Novak have the added motivation and impetus to carry on winning after his incredible achievement last year, holding all four Grand Slam titles at the same time? This is the big question and astrologically it was Pluto that proved to be the power planet for Novak.

Pluto is strong in his natal chart, close to the Midheaven, and it was when Pluto was going over his Ascendant by transit, the personal point in the chart and one of the key angles, that Novak found super-human strength to complete an amazing tennis triumph.

Born one week after Andy, Novak also has some lovely fire sign trines in his natal chart. Yet not quite as strong now as for the Brit. What is intriguing about Novak’s chart is his progressed Sun. The progressed Sun takes 30 years to move through one sign of the zodiac, one degree for each year of life. Novak’s progressed Sun is currently at 29 Gemini 59 and could not be closer to the end of the sign. In fact, it moves into Cancer by progression during the tournament.

Now usually, this might mean you’d think it was the end of his dominance as a tennis player (Gemini and its ruler Mercury both show strongly in the charts of tennis players). Yet Novak’s Mars is at 1 degree Cancer and Mars is his career planet, so next year could be stunning for him and a return to form. For now, this feels more like a transitional phase. Although like Andy, his Mars Return takes place during the tournament, exact on June 6th.

Another tough test for Djokovic as he failed to regain the last of his four Grand Slam trophies that he held all at the same time only one year ago. Pluto is the all-or-nothing planet and it returns to 16 degrees Capricorn later this year, Djokovic’ Ascendant degree. I think this with the critical degree of his progress Sun, 29 Gemini, shows the contrasting fortunes of the last two years. He might have to wait for the progressed Sun to conjunct his career planet, Mars, before he’s back on form – 2018.

Stan also has a strong progression about to happen as his progressed Venus at 6 Aries 24 is close to his natal Sun at 7 Aries 41. However, progressions are slow-moving so this looks lovely for next year, 2018, rather than this year. Venus rules love so 2018 will perhaps be a special year for him on a personal note.

Stan has done well before at this event winning it two years ago and getting to the semi-finals last year. The Aries energy that’s once again strong thanks to Uranus seems to suit this Sun Aries. Yet he has no really good transits taking place this year so his astrology isn’t leaping out.

Thanks to Astrotennis for pointing out that I missed Stan’s progressed Sun moving to a strong conjunction with his natal Mars Taurus. Usually with progressions, I look for a major transit to back it up and there wasn’t this year. Yet he made the final and seems to excel with the Uranus Aries energy, being a Sun Aries.

The Best Of The Rest

He’s on home turf and his Sun is at 27 Aries 01 so being zinged by Uranus. It’s never guaranteed that Uranus will spring a positive surprise as it’s so unpredictable but very possibly exciting times for Monsieur Tsonga. If you look at his natal chart, it’s more likely to be about love and relationships for him as the Sun rules his Leo Descendant, relationship point.

It’s Dominic Thiem’s Jupiter Return, a 12 year event, that promises opportunity and good fortune. A Sun Virgo, he has an energetic Mars/Jupiter conjunction in Libra and Jupiter is his career planet, if his time of birth is correct. It will be interesting to see how he fares this tournament and whether Jupiter’s switch of direction will boost or squash his chances. A good run for Thiem, only losing to the champion Nadal in the semi-final.

It’s his home town and his Midheaven, the career/success point in his chart is 26 Aries 36 so Uranus is very close. Another Sun Virgo, he’s one to watch.

There’s no obvious winner this time around, which is perhaps indicative of the Uranus energy. It might be someone unexpected or perhaps Andy or Rafa will pull through and use their Saturn oppositions to strengthen not weaken their tournament chances.